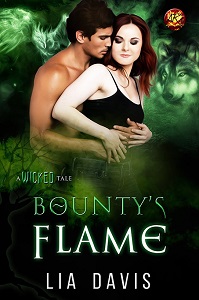 His claim on the Phoenix and her host will finally unite them…or destroy them all.

Amelia Carter has one goal: to stay alive and keep the Phoenix within from falling victim to the evil that has kept them on the run for the past year. With the Phoenix’s power of sight, they are able to stay one step ahead, until Caleb Reed catches up with them, sparking desires beyond her wildest fantasies.

A shapeshifting hellhound and paranormal bounty hunter, Caleb finally ends his century-long search for his runaway mate. When he discovers his charge is the Phoenix who fled his bed over a hundred years ago, he turns the tables on the crime lord who seeks to capture her for her powers. Keeping his mate safe becomes his priority, because he won’t fail her again.

Dark hair framed a masculine face. Even though she couldn’t see his eyes, she knew they watched her. She felt it like a physical touch. Sexual heat rolled off of him in thick waves. She found it impossible to turn away, not that she could anyway. He captivated her.

As if she had no control over her body, Amelia walked farther into the room, not stopping until she reached the bed. Then she climbed onto it and kneeled, facing him. Leaning into her, the demon smiled before reaching out to stroke her cheek. A soft moan escaped her. Electrifying energy flowed between them, sending tingles skittering all over her.

When his lips touched hers, she melted. A sense of belonging and security filled her. With this male, no one would ever hurt her. She knew that down to the bone.

The internal flame that belonged to the Phoenix raced through her veins. The male hissed out a groan and pressed his hard cock into her thigh. Her pussy ached for his touch. Gripping his large shoulders, she scored his skin with her nails and moved her hips against him.

No matter how many times she’d lived the dream-memory-vision, the intense spark of heat and raw passion ignited like it was their first time.

He broke the kiss and trailed his lips along her jaw to her neck. Sucking in a breath, she whimpered when he bit down gently on the sensitive part of her throat. Damn, he was going to kill her with the teasing.

One rough hand slid down her side, which was bare to him. She didn’t remember undressing. Then again, she never did.

It’s just a dream. Go with it.

A squeeze of her hip jerked her attention to his features. His dark brown gaze held hers. A flash of silver rippled through his irises right before a primal growl rumbled from his chest. Wolf was the first word that came to mind, but that didn’t seem correct.

“What kind of demon are you?”

He didn’t answer. He never did. It was as if he couldn’t hear her. Was it even her dream? But there was no doubt it was her body he pleasured.

Gliding his hand across her belly, he captured her mouth in another hard, demanding kiss. His tongue dipped inside, searching for hers. Just as their tongues twined, he slipped two fingers inside her. Desire burst within her and built with each thrust of his fingers, pushing her over the edge.

Lia Davis ventured into the world of writing and publishing in 2008 and never looked back. She has published more than twenty books, including the bestselling A Tiger’s Claim, book one in her fan favorite Ashwood Falls series. Her novels feature compassionate yet strong alpha heroes who know how to please their women and her leading ladies are each strong in their own way. No matter what obstacle she throws at them, they come out better in the end.

While writing was initially a way escape from real world drama, Lia now makes her living creating worlds filled with magic, mystery, romance, and adventure so that others can leave real life behind for a few hours at a time.

Lia’s favorite things are spending time with family, traveling, reading, writing, chocolate, coffee, nature and hanging out with her kitties. She and her family live in Northeast Florida battling hurricanes and very humid summers, but it’s her home and she loves it! Sign up for her newsletter, become a member of her fan club, and follow her on Twitter @NovelsByLia

For more information on other books by Lia, visit her official website: www.authorliadavis.com