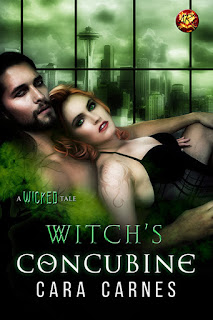 Nothing stands between a cursed witch and her quarry.

Macy Davenport has two weeks to purge the familial curse or she’ll suffer a sex-starved eternity. Finding a vampire strong enough to handle her rare dragon witch powers isn’t easy. But Doctor Death comes with a very high price and a string of complications.

Prince Dmitri Siysky, aka Doctor Death, doesn’t have time for the fiery dragon witch, even if her carnal dilemma offers interesting compensation. There’s an underground slave ring selling vampires and he’s been sent the witches responsible.

He expected trouble, but he never anticipated Macy.

“This is crazy, even for you.”

Macy Davenport merged into the left lane, her right palm pressed hard on the horn and her foot on the accelerator. People didn’t have respect for fast lanes anymore.

“Sarah, this is the perfect solution to my problem.”

“Honey, not him.” Sarah’s voice fell into a hushed whisper, as if the world would hear her speak his name from the darkened interior of Macy’s Ford Festiva. “Doctor Death isn’t for you.”

“He has a name.” A shiver skittered down Macy’s spine. “I seriously doubt Dmitri Siysky appreciates that one.”

“That vampire deserves to burn. Did you hear what he did to poor Hilda?”

“Hilda the Hag?” Macy shook her head. “Look, that vampire has slept with half of Seattle, and the only reason he’s in Imperial custody right now is because he refused to sleep with the other half—most of whom are in command. Everyone with half a spell in them knows his only crime is not playing the political game. Or, in his case, screwing Hilda.”

“So you’d take her on to break him out?”

“I’d dare her to take me on. Two more days of these powers simmering in me and I swear I’ll take out half of Seattle.” She shuddered. “Starting with Hilda the Hag’s den.”

Soap box stored for a later time, Macy dodged a white minivan and careened around a corner. Ten minutes before Imperial Station closed for the weekend. No way in hell was she suffering another night of debilitating arousal.

“I’m fresh out of luck spells, Macy, and I have yet to find one for fixing bad driving. Please slow down.” Sarah gritted her teeth. “He’s not going anywhere.”

“Look, I’m twenty nine for two more weeks. If I don’t purge the hex before the big three-zero strikes you might as well tie a bib around my neck and toss me in Witches Haven.”

“Do not speak of that place,” Sarah gasped. “I would never, ever put you there. Only the most cursed witches are sent to that…that…that travesty.”

Silence remained for a moment as the notion of Witches Haven brewed between them. They both knew the gut wrenching truth—Macy had to screw or she was screwed.

“Look, it’s like this. I literally have nothing at all to lose at this point. The only way to purge the hex is to…” Macy turned her head and slammed on her brakes when the light blazed red. Damn. One more minute lost. “You know what I need.”

“Yeah.” Sarah sighed. “I still don’t understand why this is your hex to carry.”

“It’s the curse of ten thousand nights. My mom only suffered a thousand of them before she…” Okay, she wouldn’t dredge the river of trouble tonight. “Until the hex is gone I can’t marry, I can’t have kids. I can’t even let a male witch or mortal touch me. I’m left with the trolls who gifted me with the rotten problem because my mom wouldn’t marry their king, the faeries who I loathe because they are as trustworthy as pond scum, and the vampires.”

And Dmitri was one hell of a vampire.

“So you’re going to march in there and demand he bed you?”

“Geez, Sarah.” Macy wheeled into the Imperial Station’s parking lot and threw her car into park. “You make me sound crass. I’d take him to my place first.”

Macy glowered at her longtime friend and grabbed her purse. “Stay here if you want, but I’ve got myself a vampire to indenture.”

Talking a confident game was one thing. Following through was an entirely different ballgame Macy wasn’t sure she had the equipment to play. Hell, had she even found the right ballpark?

Her knees knocked together, clattering with the knock of her kitten heels as she made her way up the zillion stairs. The first guard to slow her down before she got to her quarry was toast, or rather, an oversized toad. She didn’t have time for anything beyond level one magic. Not when her entire future was at stake.

Cara Carnes was a princess, a pirate, fashion model, actress, rock star and Jon Bon Jovi’s wife all before the age of 13. In reality, her fascination for enthralling worlds took seed somewhere amidst a somewhat dull day job and a wonderful life filled with family and friends. When she’s not cemented to her chair, Born in small-town Texas, Cara loves traveling, photography and reading.

For more information on other books by Cara, visit her website: www.caracarnes.com