Book Spotlight: Rise of the Sidenah by C.M. Story 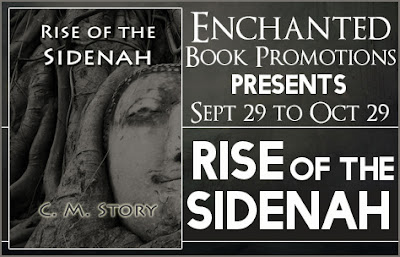 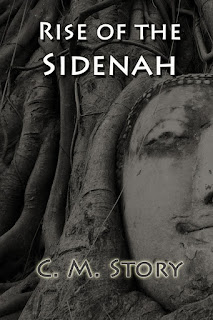 Adrienna Vedica longs to build the creatures living in her imagination. One day, she hopes to sculpt them out of stone, creating great statues like those that guard the Celany village.

She doesn’t understand why everyone seems to disapprove.

It’s only when Tishaan, a powerful man in the high council, agrees to help her sculpt that Adrienna is finally able to pursue her passion. She dives into her work, but creates with such energy she collapses from exhaustion before seeing the final results, giving Tishaan time to hide her masterpieces away.

Her mentor, Sreng—the man she secretly loves—tries to convince her that Tishaan is using her, but she can’t abandon her art. Only when people start showing up dead does she think again. There’s something off about Tishaan…and then Sreng shows her one of her early works.

But something is wrong.

The rain woke her up. Small drops blew onto her cheeks and ran down her neck. Overhead, the network of branches shielded her from the bulk of it, but the wind blew the moisture in from the side.

Reluctant to leave, she clung to the stone and looked on the image of her father’s face. Having familiarized herself again with his features, the representation disappointed her. Too still, too stern, the eyes too vacant. This was nothing more than someone’s idea of her father. Looking at it now, she realized it was entirely inadequate. If she had the chance, she would do it over, carve it in a way that would reveal her father’s true spirit.

The rain streamed over the sculpture, pushing dirt trails past the ears, over the cheeks and down the chin. With the edge of her shirt, Adrienna wiped the face clean and then hurried across the grounds and ducked under the largest tree near the center. For a time she crouched there, undisturbed, but then something snapped off to the left. She jumped, senses alert.

The Tucadorr. It could have heard her screams. How could she have been so stupid?

She held her breath, but when the animal emerged, it was much smaller than the beast that haunted her dreams. Like an overweight river rodent it waddled through the bushes, making its way toward her. She guessed it to be about four hands high, its elbows on the ground, paws drawn up under its chin. Powerful back legs sprung forward in hops, after which it would wait, look around, and clack its long nails together.

It had no tail. Gray, wiry hair lay matted with clumps of mud, streams of dirty water pouring off its belly and onto the ground. Strings of drool escaped the side of its mouth. It drew its lips wide, uncovering pointed teeth, and then puckered them forward again. Thick eyes bulged from the side of its head, each eyeball moving independently of the other.

Adrienna stared. The creature was unlike any she had seen before, but still something felt familiar about it. Afraid to move lest she draw its attention, she remained by the tree while it shuffled forward, intent on its path. At one point she worried it was coming toward her, but then it passed by, neither eye seeming to take notice of her. On it went, heading east, stopping after every three hops. Ahead, she saw a dark shadow in its path, rectangular shaped, a shallow depression in the ground. Was this where it sought shelter in the storms?

The animal hurried forward now, no longer hopping but wobbling back and forth at an ungainly pace. The tongue slung about, elbows working like paws over the ground. At the hole it gazed hungrily for a moment and then tore into the dirt, claws slicing, hips protruding into the air. Sloppy mud slung wide behind it, some landing with a slap on other markers. On and on it worked, hopping about now and then to send the dirt another direction. Adrienna watched in horrid fascination. In the time it would take her to bathe, the creature had dug a deep, square hole.

C. M. Story has always been a fan of fantasy in all its many forms, including the kind she frequently indulged in during boring lectures in school. She didn't try her hand at penning her own stories, however, until long after she'd gotten her Bachelor's degree in music.

Once she sold her first short story, she got a writing job and never looked back. Today she runs a successful freelance writing and editing business out of her home in Idaho, and frequently travels to other inspiring places with her trusty laptop in tow. And yes, despite rumors to the contrary, "Story" is her real last name.

"Rise of the Sidenah" was inspired by gothic architecture, a tune by "The Calling," and the idea that following the heart may cause pain, but is the only way to truly fulfill one's purpose in life.