Book Spotlight & Giveaway: Breaking all the Rules by Aliyah Burke 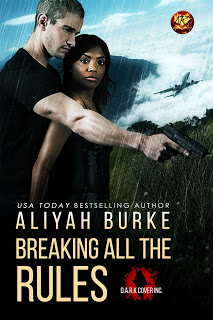 Can one night of passion between a woman and her boss lead to happily ever after?

When Kristopher “Wild” Wilder takes a few days of R&R in Belize after his last mission with D.A.R.K. Cover, Inc., he meets a woman who sets his blood on fire. The night they share is explosive, but little does he know, she’s been hired as D.A.R.K. Cover’s newest pilot. Wild looks forward to continuing their connection; problem is, she’s not on board with that idea.

Alyse Lamar is a damn good pilot. She’s taken this new job for a few reasons, but when she realizes she’s slept with one of her new bosses she isn’t sure she should stay. She can’t seem to keep her hands off him, and vice versa. Her strict rule about never mixing business with pleasure is taking one heck of a beating.

Wild is many things, a quitter isn’t one of them. He wants this feisty woman and knows she wants him just as much. He vows to find a way past her walls and make her understand that what began as one night in Belize is worth breaking all the rules and can lead to forever.

Spinning back to the bar, she drummed her hands along the shiny, smooth top. “Bartender.”

The hot man made his way down to her. “Yes, beautiful?”

She smiled at him. “Another beer please.”

“Of course. Same kind as before?”

He grabbed the bottle, popped the top, and placed it before her. “Good news?”

She took a swig and nodded. “Got the job I’ve been hoping for.”

He winked and pocketed the money slid over to him. Alyse toasted him with her beer and turned back to get off the stool. She walked down to the edge of the water.

The silken sand beneath her feet combined with the warm liquid lapping at her toes had her sighing in pleasure. Once she finished her beer, she pivoted and made her way back to the bar where she handed the bottle over.

She stuck her hands in her pockets and made her way down the beach. Not far away, a group of mixed aged people were dancing along the water. The guys there beckoned her and she went willingly. Time passed as she danced and sweated to the pounding music.

Arms up, she shook her hips, lower lip caught in her teeth. Through the crowd of spectators, her gaze landed on a man who watched her hungrily. His dark blond hair shone golden in the sun’s rays. He stood braced shoulder-width apart, muscular arms crossed and a drink in one hand.

From here, she couldn’t identify eye color but all she could see was nice. Oh, so nice. He gave her a brief nod and wriggled his fingers in her direction. Her grin turned saucy and she crooked a finger at him.

He tipped back his drink, placed the bottle in the sand, and strode toward her. The sun gleamed off his bare tanned skin as he prowled closer. Mediterranean blue eyes honed in on her face as he reached out and snagged her around the waist with one arm.

Electricity sparked out from his touch and spread throughout her. Pelvises rubbing against one another, her core temperature skyrocketed. His touch, the catalyst to the burning embers created from the output of energy from her dancing. Alyse rested her arms over his shoulders as they continued to keep the beat and grind with the music.

That very thing segued to a slow romantic song. Her mysterious dance partner moved a few sweaty tendrils to rest behind her ear. She laced her fingers behind his neck.

“Hi,” he murmured. He placed his hands on her ass, ensuring to keep them pressed together.

His thick length was unavoidable. But then, if he were willing she’d not be avoiding it at all.

“Are we exchanging names?” His voice was sin on earth, making her think along the lines of all kinds of naughtiness.

He moved one hand to the center of her back, bringing her closer still as he nuzzled her neck. He smelled like man, adventure, and sweat. A great smell, in her humble opinion.

“Only if you want me to call your name out in bed tonight.”

Aliyah Burke is an avid reader and is never far from pen and paper (or the computer). She loves to hear from her readers and can be found on Facebook or Twitter at @AliyahBurke96.

She is married to a career military man. They are owned by four Borzoi, and a DSH cat. She spends her days sharing time between work, writing, and dog training.

For more information on other books by Aliyah, visit her website: www.aliyah-burke.com