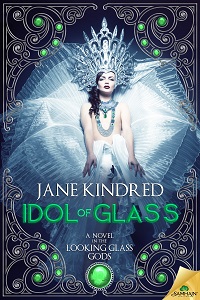 Ra has ruined everything. Returning to life through “renaissance” was her first mistake. Magical excess was her second. Now she must face the consequences of her reckless conjuring. Her beloved Ahr is dead by her hand, and the comfort she’d found in gender-rebel Jak seems lost to her forever.

Ra takes solace in punishment—and in communion with her punisher, the mysterious and merciless MeerShiva. But Shiva has spun a skein of secrecy over centuries—secrets about Ra’s origins and the origins of the Meer themselves. And as the secrets begin to unravel, someone else’s magic is at work from the hidden realm. Someone with the ability to redraw the fabric of the world itself.

As the picture becomes clearer, Ra must face some harsh realities: not everything is about her, and punishment isn’t enough. She must stand before Jak and try to atone for what she’s done. But seeing Jak will reveal one more secret Ra never saw coming—and one that may mean her own undoing.

Even spattered in dried blood and pieces of the dead man’s flesh, they cut a striking pair of figures on the dunes of the falend. Jet and dark poppy, their hair hung down their backs in the colors of atrocity. Light caressed them, knowing they were more than human, rippling iridescent over their tresses like quicksilver in the presence of the divine.

As in the youth of her former life, Ra was attired in the manner of a Meeric prince, the plain kaftan of black silk muting much of the violence that covered her.

MeerShiva was less subtle, the pearl-embroidered train of her sheer citrine gown, from the same ancient era, dragging behind her, caked in mud from the heath they’d left behind. They were two livid strokes of pigment on the canvas of sun-blanched sand.

Satisfied with the decimation of the remains they’d dumped in the marsh outside the small trading post beyond Mole Downs, they had simply walked away, and continued walking until they’d left the high country altogether. Coming down out of the mound-riddled moors and across the lowland heath, they followed the Filial River toward the east, past the falls that plunged beneath the bluff at the wasteland’s edge, and into the high desert north of the Anamnesis delta, until at last even Meeric sensibility demanded rest.

The palette of the sky behind the scattered stars held the deep lack of pigment that came with the hours after midnight, and they were in the center of nothing, a vast stretch of arid land that separated mound country from the Deltan lowlands. With a few murmured words, Shiva raised a single tower around them, round and made of stone, with windowless walls that stretched up over them into immeasurable heights. Meeric conjuring was often merely out of whim, influenced by the current state of mind and body. They lay on a floor of heather, an anomalous afterthought, with barely a pause between waking and sleep. 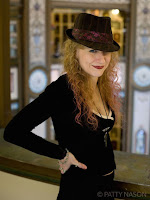 Jane Kindred is the author of epic fantasy series The House of Arkhangel’sk, Demons of Elysium, and Looking Glass Gods. She spent her formative years ruining her eyes reading romance novels in the Tucson sun and watching Star Trek marathons in the dark. She now writes to the sound of San Francisco foghorns while two cats slowly but surely edge her off the side of the bed.

1 set of signed print copies of Books 1, 2, and 3 of Looking Glass Gods