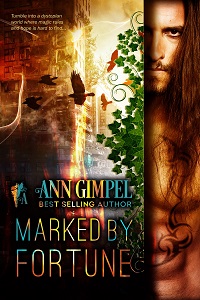 Tumble into a dystopian world where magic rules and hope is hard to find.

Magic levies a steep price on anyone brave enough or stupid enough to dabble in it.

Wizards never forgave Ned for not being one of them. They didn’t exactly come out and say his life was expendable, but they didn’t have to. He figured it out fast enough when they conscripted him into their long-running war the second he was old enough to fight. Isolated, different, he puzzled out how his brand of magic worked on his own. When he’s finally, finally sent on a solo mission, he vows to make the most of every single moment of freedom.

Fleeing the tide of doom wiping out humanity, Amanda and her family escape to a remote corner of California, where they eke out a hardscrabble existence. With her parents at each other’s throats and her brother mysteriously gone, Amanda runs up against malevolent power beyond her wildest imaginings. Captured by the undead, she’s about to join their ranks when Ned shows up.

Attraction ignites—hot, urgent, delicious—but celibacy may well be the price of Ned’s magic, and he can’t risk his power. Or can he? Even though he stands to lose everything, Ned doesn’t hesitate after Tantalus—one of the insidiously beautiful dark gods—kidnaps Amanda. Defying a direct order from his wizard battle lord, he goes after the woman he loves. Even if she can’t ever be his, he’ll be damned if he’ll leave her to the dark god’s whims.

Ned crouched amid the remains of what was once downtown Sacramento, using a convenient, partly-decimated building as cover. The rest of his unit hid in close proximity—at least he hoped they did. A low, whistling noise ratcheted his heart into hyper drive. Enemy magic. Maintaining his crouch, he spun, searching the late afternoon gloom for clues. Not quite sure what tipped him off, he leapt out of the way just before a concrete block exploded, showering him with debris.

“Whew! Way too close.” The words tore out of him before he could stop them.

He drew his lips into a disgusted snarl and wondered for the thousandth time how he, a human mage, ever got mixed up with the wizards’ war.

Because the bastards didn’t give me a choice.

Sweat trickled down his forehead. His leather headband caught some of it, but a few drops fell into his eyes. They stung like hell, and he shook his head to disperse the salty liquid. The beginnings of a headache throbbed behind one temple.

“Landarik.” Ned focused his commander’s name into his mouthpiece. “Where are you?”

“Right behind you.” A voice dripped sarcasm into Ned’s ear.

Ned whipped around. Landarik stood so close, Ned’s braids slapped against the wizard’s helmet. “I wish you wouldn’t do that,” Ned sputtered through clenched teeth. “I hate when you sneak up on me. Especially when it could’ve been one of them. You’re lucky I didn’t blast you.”

“Like your puny human magic would’ve made a dent. Cut the shit. What do you want?”

Speaking through the slit in his bronzed helmet, Landarik looked like a robot. Only his blond braids, with debris tangled in them, ruined the automaton image. He must’ve noticed Ned’s stare because Landarik gathered his ratty braids and tossed them over his shoulders.

“I’m beat. Request permission to return to the caves.”

“Mage or no,” Landarik grunted, “you humans are more work than you’re worth.  I have no fucking idea what the goddess had up her sleeve when she created those like you.”

“I release you—but only because you’re more worthless than usual. Return no later than first light.” Whistling sounded again. Without apparent thought or effort, Landarik raised a hand. A bolt of power flew from his fingertips and vaporized a small building a hundred yards away.

“How can you know so…precisely?” Ned sputtered.

Landarik tipped the visor of his helmet up. Extraordinary blue eyes shot darts at Ned, and the sharp-boned features characteristic of the wizard race twisted in irritation. “I’ve told you and told you,” he lectured in a patronizing voice that grated on Ned’s nerves. “Hold your inner parts still, human. If you managed yourself better, you’d hear where the enemy is hiding.” He snorted. “Sometimes I find it difficult to fathom how you’re still alive.”

“You and me both,” Ned mumbled.

Sketching a rectangular portal in the hot, dusty air, he jumped through into the Ways, picturing the wizards’ caves as he did so. Wizards developed the Ways thousands of years ago so they could travel to distant locations. Their harmonics were so well matched to galactic magnetics, they remained fully functional despite minimal maintenance.

As he sped through the dimension carrying him to a few hours of safety, Ned’s empty stomach clenched in anger. It wasn’t fair for Landarik to expect him to know everything the vetted wizard warriors did. Most of them were hundreds—if not thousands—of years old, while he was a mere…well, something. Young, anyway. In truth, he wasn’t precisely sure of his age. Wizards lived so long they didn’t bother keeping those types of records.

Ned didn’t know if it was fortune, or her opposite, but he’d drawn his first breath in a wizard stronghold. He had little memory of his first few years, but around the time he turned five, one of the wizards—the acolyte master, Karras—took notice of the little human who carted power after him the same way other youngsters dragged beloved toys.

Ann Gimpel is a national bestselling author. A lifelong aficionado of the unusual, she began writing speculative fiction a few years ago. Since then her short fiction has appeared in a number of webzines and anthologies. Her longer books run the gamut from urban fantasy to paranormal romance. Once upon a time, she nurtured clients, now she nurtures dark, gritty fantasy stories that push hard against reality. When she’s not writing, she’s in the backcountry getting down and dirty with her camera. She’s published over 30 books to date, with several more planned for 2015 and beyond. A husband, grown children, grandchildren and three wolf hybrids round out her family.