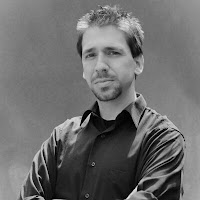 Christopher Mannino’s life is best described as an unending creative outlet. He teaches high school theatre in Greenbelt, Maryland. In addition to his daily drama classes, he runs several after-school performance and production drama groups. He spends his summers writing and singing. Mannino holds a Master of Arts in Theatre Education from Catholic University, and has studied mythology and literature both in America and at Oxford University. His work with young people helped inspire him to write young adult fantasy, although it was his love of reading that truly brought his writing to life.

Christopher is the author of The Scythe Wielder’s Secret, a thrilling young adult fantasy/adventure series. The first two books in the trilogy, School of Deaths and Sword of Deaths, are out now, with the third book Daughter of Deaths expected to be released next year.

To learn more, go to http://www.christophermannino.com/

When I write, my process begins with a scenario. A scenario is sort of like the back cover of a novel, the blurb you read when deciding whether to buy a book. A scenario has a general set-up, maybe some of the characters but little more.

After developing a scenario, I create what I call an “image outline.” I envision a number of specific visual images. I can see very detailed pictures in my mind, and sometimes even sketch them out on paper. I don’t know where in the story these images will occur, or how they will connect, but I know they’re an integral part of the story. For example, with School of Deaths, I pictured an enormous iron door in the middle of an upward-flowing waterfall. This image became a central location in the series, although at first I didn’t know what it was at all.

Following the scenario and the image outline, I do largely let the story flow at its own pace. With Daughter of Deaths, the final novel in the trilogy, I did have to outline a bit more, to make sure all elements wrapped up in a cohesive way, but even in that novel the story mostly evolved from start to end while I wrote.

Everywhere! I absolutely love to travel, and wish I could do it more often. Asia and South America are high on my list, especially Machu Picchu and India. Last year my wife and I celebrated our honeymoon in Hawaii and the natural features of the islands truly inspired me. The original series was largely inspired by my studies in Oxford and a trip to Cornwall, so travelling as a form of inspiration is a huge part of how I write.

The Scythe Wielder’s Secret was inspired by a trip I took to Tintagel, Cornwall. I then worked on the initial novel while I was studying at Oxford. In the first novel, most of the locations visited are fantasy places. However, in books two and three, I returned to the United Kingdom with my characters. There is a large section in the final novel that takes place in Oxford itself, and a scene in book two that takes place in Tintagel. Other scenes include brief visits to China and Rome in the books, but the largest focus does remain the many diverse locations in the imaginative World of Deaths.

Yes- I created a Pandora station just for writing, it helps me focus. The music I listen to is mostly from soundtracks, and is mixed with modern classical artists like Lindsey Stirling, Enya, and Karl Jenkins.

Sword of Deaths, the second novel in The Scythe Wielder’s Secret was released in ebook in August, and will be released in paperback in January. The sequel expands on the World of Deaths, going far deeper into the characters and backstory of the world. In the second book, I used three points of view, rotating between three of the lead characters. The three characters experience many unexpected twists and turns as the stage is set for an epic conclusion to the trilogy in the final novel.

Writing the novel is the easy part. Every progressive step only gets harder. The editing process is tricky, but then there’s finding a publisher and going through their processes. After that you’ve only just started, while you try to navigate the world of marketing. With more books than ever before published every day, and fewer people reading regularly, it’s never been trickier to find success in the publishing industry. Ingenuity and perseverance do make a major difference.

Never give up. It’s easy to get frustrated with writing, publishing, and marketing, but those who succeed are the ones who keep trying and never give up.

Oh wow, too many books and writers to list. Tolkien was my favorite writer for a long time. I grew up loving the mythology of Middle Earth, and later studied mythology in college. The Mabinogi, a collection of Welsh myths, remains one of my favorite myth cycles. I did get swept up in the Potter books when they came out. Other favorite novels include Pillars of the Earth, Good Omens, and American Gods.