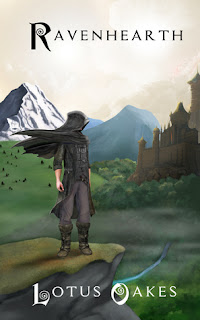 In a world covered by a deadly miasma, humans survive by way of the protection of powerful mages known as Keepers. In the town of Ravenhearth, the Keeper requests a companion every ten years. What happens to them after those ten years, no one knows, for none has ever returned.

Ash is a young orphan who dreams of learning magic. When the newest request for a companion is posted, he volunteers. Upon his arrival, he finds the Keeper's home is nothing like the fearful whispers shared around the village. Instead, he slowly grows to become part of the close-knit family of the Keeper's castle—and falling for Giles, the butler of Ravenhearth, rather than the mage he's been sent there to attend.

Orphaned and homeless, Ash ekes out a living doing odd jobs around the town of Ravenhearth for a pittance in coins and scraps of food. His clothes are ragged and worn and the rest of the townfolk give him a wide berth, for they always felt there was something strange about him.

Like all inhabited towns, Ravenhearth is protected by a Keeper, who lives in a castle not far from the town. Every ten years the Keeper sends a letter asking for a companion from the village. Ash is old enough to remember the last letter and the sting of magic from it. His mother had been a mage, not as powerful as a Keeper and Ash too wishes to learn magic.

And maybe, if he volunteers this time, then the Keeper might be able to teach him. And leaving the town where his mother died would certainly be no hardship, it's not as if he'd be leaving lots of friends behind. And so begins Ash's adventure in the castle of the Keeper.

The book had a little bit of a fairy tale feel to it, and reminded me a little of the Cinderella story, although this one was a gay story.

Ash is the point of view character for the whole book and while that helped you get into Ash's head, you only reall got to know the other character's through Ashs's eyes. It has excellent characterisation, even some you love to hate. I couldn't stand the twins, Whitney and Courtney. They came across as petulant, whining brats, although they were adults and older than Ash. Lilah and Verity became surrogate mothers of a sort to Ash and it was good to see him let go of some of the grief he was still carrying around after his own mother's death.

Romance between Ash and Giles is slow to take off, it's mainly one-sided for most of the book, with Giles not even being aware that Ash has fallen in love with him. When they do get together, you feel like them cheering them on, finally!

The book was about 60,000 words and unusually for a book of that length, there weren't really any chapters, just scene breaks. Chapters would have helped it flow more easily.

There were some questions I would have loved to have been answered in the book, but they weren't. What was this strange fog? Why was it toxic to humans? Was it some sort of industrial accident? A magic experiment gone wrong? We don't find out. The author gave a tantaslising taste of world-building but not enough. I wanted to know more about Ash's world, more about how magic worked here but we barely see any magic at all. Mostly Ash reading about it and doing meditation to clear his mind.

So, although I had some problems with the world-building, the story itself is good, well-written and populated with interesting characters. There are a couple of explitict scenes, but I'd say this romance falls more on the sweet side, with a lot of tension and build-up between our two main characters.

If you want a romantic read that's light on the angst, give this one a try.