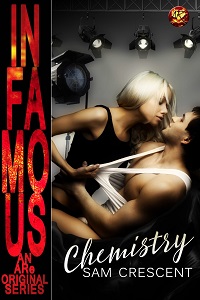 Will their romance survive when the cameras stop rolling?

Action film star Adam Feltworth’s last movie flopped big time, yet he’s offered one last chance to star in a romantic drama alongside the up-and-coming actress, Sara Leigh. Adam has never filmed sexy scenes with a full-figured woman, but he’s been warned—it’s this or retirement.

Throughout her career, Sarah has portrayed the fat, supportive best friend. With her breakout movie, Chemistry, she hopes to finally bring the pleasingly plump heroine into the mainstream spotlight. Knowing Adam’s history of preferring svelte beauties, she doesn’t want him for the part.

When Adam first holds Sarah during the screen test, a spark ignites that neither one expects. Now Adam’s problem is bigger than simply filming a hit movie to save his floundering career. He needs to prove to Sarah that she’s the only woman he desires…both on and off the screen.

Sarah’s lips were tingling, and the back of her head was hurting from several of the men grabbing her. The kiss was supposed to start out slow and build until it was like watching fire on the screen. Biting her lip, she stared down at the script that she knew word-for-word. Every job she went into, she always made sure that she knew what was expected of her, and this was no different.

Tucking some hair behind her ear, she stood up from her chair and started to pace.

Dean, her agent and the closest thing she had to a father, came up to her. “Hey, princess, how are you doing?”

“I’m doing good. What’s next? Or are we done for today?” She kind of hoped they were done for the day. Her lips were hurting, and she didn’t know how many more guys she could handle sucking face with.

This was her first ever breakout romance movie, and the studio was determined to pair her up with someone who she shared chemistry with. They believed in the script and that, with the right casting, the movie could be a success. At size sixteen, Sarah had been prepared to slim down, but Dean told her not to. The studio wanted to do something radical, and that meant casting a larger woman in the main role as the love interest.

Sarah was used to having a lot of scathing reports about her weight. She’d struggled with it all of her life, but it didn’t stop her from being hired.

“You’ve got one more guy this afternoon. He’ll be arriving in ten minutes, knowing the actor, make it half an hour.”

“The action guy?” Great, her day was getting worse with him being next in line to do a make out scene.

“Rumor has it that he’s hoping to change his image, and he wants this role.”

“I doubt that.” She heard he was difficult to work with, and now no one wanted anything to do with him. Sarah had watched many of his movies, and after the third one she’d grown bored. The same movie, the same storyline, and the same actions. Sarah grew bored, and she hadn’t watched an Adam Feltworth movie in over five years.

“Look, they want you, Sarah. It doesn’t matter what Adam wants. He either abides by their rules, or he’s out.”

Taking her seat once again, she glanced at her watch to see that Adam was in fact late. Ten minutes went by, and as she looked at the director, producer, writer, and several members from the studio paying for the movie to be made, she saw they were all angry.

Half an hour later Adam walked into the room as if he owned the place. Sarah averted her gaze, not liking his attitude as he walked up to the director and producer. Flicking through the script, she listened to their conversation.

“You’re late. We will not deal with tardiness. We’re on a deadline, you miss that deadline twice in a row, you’re out,” the director said.

That surprised her, and when she looked up, she saw the surprise on Adam’s face. Niles, his agent, started making excuses.

“I don’t care for excuses. The rules are the rules, and if you have a problem, take it up with the boss,” the director said, speaking up. Mitch wasn’t in a good mood.

“I’ve never been forced to have time constraints,” Adam said.

“You want in on my movie, you will.” Mitch moved toward her. “Now, this is Sarah Leigh, she’ll be playing the main love interest, Piper Salt. The scene we will be testing today is the first kiss. Take a seat, Adam.”

Sarah forced herself to watch as Adam approached. He took a seat, and she was shocked by how childish he was being. At thirty-five years old, shouldn’t he be able to handle himself a lot better?

“Your character is David, and you’ve just realized that you’ve fallen in love with the girl everyone overlooks. Now, are you familiar with the scene?” Mitch asked.

Sarah had already placed her script down on the table, and she didn’t need to look at it. Smiling at Adam, who was in fact David, she chuckled. “What is your problem? It was one date, and it wasn’t exactly a good date.” She reached out to take her imaginary coffee cup and took a sip.

Adam sighed, rubbing at his temple, and turning toward her. He leaned his elbows on the table, and lifted his gaze to hers. For once, she actually believed that Adam was staring at her. “You shouldn’t go out with guys that are coded or designed to be compatible. It’s a computer system. It’s not real.”

“This is how we modern women do it, David. I can’t just go wandering into some bar and wait for it to happen. I’m not like you. How many women have you screwed in the last month? Twenty? Thirty? Did you do more than one a night?” She licked her lips and tilted her head to the side. Her cheeks started to flush like they always did when she spoke of screwing, and sex, and everything she didn’t have a clue about it. Twenty-five-years old, and still a virgin, it was pitiful.

“You can’t find what you’re looking for online.”

She went to grab her cup, and Adam stopped her, placing his hand on top of hers. “I’m looking, Piper.”

Giving a nervous chuckle, she shook her head. “You’re my best friend.”

“I’m not looking at you like you’re my best friend. When I look at you, I see a woman I want, Piper, a woman I need.”

He leaned in close, and Sarah couldn’t stop herself, she glanced down at his lips. “What are you doing?”

“I’m going to do what I’ve been dreaming about for fucking years.” His lips pressed against hers, hesitant at first, and slowly, he deepened the kiss.

Everything fell away, and Sarah completely forgot that she was supposed to be acting. He plundered her mouth with his tongue, and instead of yanking on her hair, he cupped her cheek.

For more information on other books by Sam, visit her official website:
https://samcrescent.wordpress.com/

2 winners to receive two eBooks from Are books.