Although I was mostly into horror books as a teenager, I rarely read that genre anymore. Don’t get me wrong I still like a good scare, it’s just that no one has elevated past the initial bumps in the night which enamored me as a teen. The Shining, Carrie, Ghost Story, Watchers, Phantoms—these books were eye opening thrills for someone on the cusp of adulthood. Romance wasn’t really my thing; a few Danielle Steel books here and there mixed in with some Catherine Coulter were tossed into my TBR list. However, my problem with the genre at the time was mostly the women were damsels in distress. Since my mind doesn’t work that way, I stuck with the creatures under the bed.

Around college a shift happened where suspense became my main focus—dominant women who had to hunt down the killer before the maniac turned the tables and hunted them. These books were fun to read, and my feminism card was never called into question. Unfortunately, the backdrop was always dim. Wallowing around in the darkness of suspense took a toll on my imagination, which forced me to find lighter fare. I stumbled upon Nora Roberts, Jennifer Cruise, and Susan Elizabeth Phillips. These masters of romance don’t do victims. Instead, they do fierce women in screwed up situations. I can deal with that more so than the chick who needs to be saved. A lot of historicals use this device, since real history wasn’t so hip to women’s lib it was just easier to put the heroine in the hands of a strong buck of a man.

As of late my reading list has taken another shift—kick ass witches, werewolf shifters, and a Marilyn Monroe look-a-like who doubles as a detective. I must need a good laugh because all these books are light and fun and not one damsel in distress. Don’t get me wrong, if any of my horror peeps put out a new book I’ll be the first in line. If Beverly Jenkins decides to give me a feisty heroine in an era that didn’t have working plumbing I’m there. My reading list is ever-changing and I am open to almost anything. The one thing I know for sure is I will never give up on a quick thinking women. 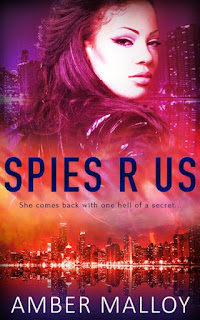 Days away from permanently leaving the spy game, Eden Morgan plan of being a stay at home mom goes up in smoke. Number one on the Russian hit list, Eden must leave her beautiful family and figure out who’s trying to kill her.

Unfortunately, her agency burns her status, so what should have been only weeks on the run turned into years. Instead of accepting her fate, Eden claws her way from the dead to save the next people on the Russian’s hit list… her kids. However, after three years missing, her homecoming isn’t well received. She finds that her awesome husband has moved on with a perky school teacher; not to mention her twins barely remember her. With a good idea who’s behind the plot to kill them, Eden must navigate car pool lanes, bitchy moms, and one angry, sexy husband.

By definition, Vann Morgan was charmed. One gorgeous wife and twins, and the most difficult thing in his life was reconstruction of his Chicago brownstone. Unfortunately everything changes when his lovely wife disappears and no one but him seems to care. After some years, Vann makes a new normal as a single dad, but his routine is blown apart when his long lost wife comes back. Unable to trust Eden with his heart, he soon uncovers that everything surrounding her disappearance was all his fault.

Amber Malloy dreamed of being a double agent but couldn't pass the psyche evaluation. Crushed by despair that she couldn't legally shoot things, Amber pursued her second career choice as pastry chef. When she's not writing or whipping up a mean Snickers Cheesecake, she occasionally spies on her sommelier. Amber is convinced he's faking his French accent.