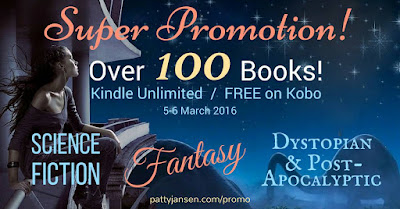 Over a hundred books available in this double promotion. Books you can read for free if you have a Kindle Unlimited subscription, and if not, they will be reduced to 99 cents on the dates of the promo - March 5-6.

The second part is first books of a series free on Kobo. Science-fiction, horror, fantasy, paranormal and speculative fiction romances, something for everyone! Here is just a small selection below:

A collection of fifteen short stories and novellas by Patty Jansen. Includes the Writers of the Future winning story This Peaceful State Of War, as well as fiction published in Analog Science Fiction and Fact.


Waking up without his memories and hunted by Agent Cooper, Michael finds sanctuary with a group of perceivers: telepaths who sense the thoughts and emotions of others. Drawn into their battle to stay free of the cure which threatens to strip them of their powers, he searches for the person who stole his past. As the tension between perceivers and norms erupts into violence, Michael pieces together the shocking truth behind the origin of their power. To save his friends from destruction, he must face Cooper and confront the painful revelations of his forgotten secrets.

A gripping science fiction thriller set on the streets of London, Mind Secrets takes an exciting and dangerous journey into intrigue, friendship and deception.


Five fantasy and science fiction tales that will sweep you to other worlds.

A tired old woman is the only one who can save a city from the terrifying Pantheon. A boy walks the empty corridors of a starship with only his dog for company. A high-flying city worker learns that fairy tales really do come true. A young slave woman discovers that she carries a power that could set her free. A cyborg demon-hunter meets an angel who throws his world into chaos.

Step into the world of the circle spinner…


One hundred and twelve years after the fall, the Republic of Texas is built on two foundations: total freedom and total responsibility. A law broken means a strike against the lawbreaker. Five strikes means execution. The only hope for the law breaker is to escape Texas—to go Striker—before justice comes for them.

Sixteen-year-old Karas Quick has never had it easy. The daughter of a Striker and an alcoholic mother, she’s gotten everything she has the hard way — even the strike on her neck. Yet try as Karas might to stay above-board with the authorities, there are some things you just can’t plan for.

Like seeing the face of her long-lost father paraded through the town square in chains.

In the blink of an eye, Karas’s life changes forever. Potential strikes be damned, she has to see her father one last time. What she discovers propels her upon an unimaginable journey, one she can only hope she’ll survive.


Captain Dominic Holland leads a crew of skilled covert operatives and talented scientific personnel. He’s taken them to all corners of the earth to protect the United States from biological and chemical warfare. When his CIA handler, Meredith Webb, gives him a mission to investigate a disturbing lead on a laboratory based out of an abandoned oil rig, they discover the most terrifying threat to mankind they’ve ever faced—a genetically engineered biological weapon called the Oni Agent.

Back in the United States, Meredith discovers a frightening connection between the CIA and the Oni Agent. But her investigations are short-lived when the Agent spreads and brings mankind to its knees. Cities burn as it turns humans into warped creatures hell-bent on destruction.

Dominic and Meredith vow to do everything they can to combat the Agent and find a cure. But will their efforts be enough to turn the tide—or is humanity’s fate already sealed?

The Law of Isolation
by Angela Holder


Two lands, separated for a millennium by divine decree. Each holds the key to the other’s survival.

The Matriarch of Ramunna needs an heir. Only the lost healing magic of the ancient wizards can help her conceive and bear the daughter who will ensure Ramunna’s future. She sends an expedition to seek the wizards who legends say still dwell somewhere far across the uncharted ocean.

Tevenar hovers on the brink of disaster. Elkan, Josiah, and the rest of the Wizard’s Guild battle a virulent wheat blight, but even the Mother’s power might not be enough to prevent a deadly famine. The arrival of the Matriarch’s envoy offers both hope and danger. For in order to strike the bargain that could save both lands, they’ll have to sacrifice the isolation that has protected Tevenar for centuries.

The Silvering
by G.B. Wren


This is Book 2 in The Silvering Series and the second in reading order.

Loran Avileen wants nothing more than a new life in a magical land with Topen, the man who captured her heart. There's only one person who could turn her dream into a nightmare -- her brother.

The evil sorcerer, Nepsaril, left the scars of dark magic on her brother's flesh and power now dominates her sibling's mind. He seeks magical allies to help him strip the rule of his land from his twin. But the opportunistic Listurn may have found a greater purpose for him.

Can Topen and Loran stop her brother's quest in time to keep two powerful magical families from war?


Recently released from a mental institution, Beth Gregory accepts a job as a live-in secretary/PA to the reclusive painter Josh Warrington. From the first moment he sees her, Beth’s long red hair fascinates him, and Josh wants her to be his Rapunzel for a series of fairy tale paintings on which he’s working.

Give Up The Ghost
by Megan Crewe


Cass McKenna much prefers the company of ghosts over "breathers." Ghosts are uncomplicated and dependable, and they know the dirt on everybody... and Cass loves dirt. She's on a mission to expose the lies and backstabbing between her fellow students.

But when the vice president of the student council discovers her secret, Cass's whole scheme hangs in the balance. Tim wants her to help him contact his recently deceased mother, and Cass reluctantly agrees.

As Cass becomes increasingly entwined in Tim's life, she's surprised to realize he's not so bad—and he needs help more desperately than anyone else suspects. Maybe it's time to give the living another chance...


To see all the books available, please visit the promo page here: