Guest Post & Giveaway: Dragons Among Them by Kyra Jacobs

Hi, everyone. Kyra Jacobs here celebrating the release of my latest novel, DRAGONS AMONG THEM. While romance is nothing new to me, writing in a fantasy world and being able to bend rules to my will certainly was prior to the start of this series. And oh, did I have fun with that!

In DRAGONS (Book 1 in the Kingdoms of Fire and Ice trilogy) the hero Zayne Godfrey is a dragon-shifting prince living in a hidden, medieval-ish realm. The heroine Adelaide (Addie) Miller, however, is a simple, independent gal who grew up in Indiana. When their worlds collide, age-old secrets slowly surface.

“You do understand that if I answer your questions honestly today, you may never look at me the same again, don’t you? It’ll be like I’ve grown horns on my head or something.”

“As a man who routinely dons scales and talons, horns would do little to scare me.”

Upon discovering I had written a book about shifters, for today’s post I was asked this question:  If I was a shifter, what animal would I be?

Which, honestly, is a pretty tough question. I mean, Zayne had to be a dragon-shifter—that was the story that called me to write. But if a wizard showed up on my doorstep tomorrow saying I could shift into anything I wanted to be, what would I choose?

As indecisive as I can be about choosing where to go out for dinner or what to watch on TV, something tells me the wizard might well give up and leave before I could make up my mind! Lol But for the sake of this blog I’ll choose a Great Horned Owl.

This way I could fly, I’d travel in silent stealth mode all the time, my head could swivel most of the way around so I could keep an eye on my kids from just about anywhere, and…here’s the best part…those “horns” on their head? They’re tufts of feathers that to me look like eyebrows. As a writer who not only writes often about brow activities but also employs the use of them frequently herself, these brows would totally rock.

And come on—who’s gonna mess with a Great Horned Owl? They’re intimidating as all get out!

Okay, so that’s one of many of the creatures I’d pick. How about you? If you could shift into any creature, what would it be? While you think about that, here’s a little teaser from

Dragons Among Them, where men truly do shift into dragons to save the women they love. Happy daydreaming, everyone!

Dragons Among Them
by Krya Jacobs
Kingdoms of Fire and Ice Book 1
Paranormal/Fantasy/Romance/Shifters
Samhain Publishing
Date of Publication: April 19th 2016

Prince Zayne Godfrey, heir to Edana’s throne, is betrothed to the lone princess of rival kingdom Forath. While his heart is not in the arranged marriage, he will do his royal duty.

When he finds a beautiful stranger cornered by a pack of wolves, he doesn’t hesitate to shift into his golden dragon form to save her. She thanks him by taking one look at him and fainting dead away.

Photographer Adelaide Miller is in England for a career-making shoot when a bizarre jogging mishap lands her in a dangerous, medieval-like world of royals, wizards and dragon-shifting men. Her first instinct is to find her way back, but the fire-breathing prince intent on protecting her threatens to melt her heart.

Zayne’s burning passion for Adelaide not only jeopardizes the fragile peace between two kingdoms, it uncovers a ruthless plot to destroy his family.

Remaining together may change Adelaide’s very definition of home—and expose one searing secret that could forever shift the balance of power in Zayne’s world.


“Are you sure this is really such a good idea—”

Addie stopped in midsentence as the prince turned from her, dropped trou, and moved to tuck those into his pack as well. He detached it from Will’s saddle and tossed it toward her. She had but a moment to enjoy the view before the air around them began to swirl. The wind swallowed Zayne in a mini tornado, then faded to reveal him in his giant, golden-scaled form. He stretched his wings, shook out his neck in the same manner Addie had seen Will do countless times now, and then turned his golden, glowing eyes her way.

She stared at him in awe. As a man, he was chiseled like a Greek god. As a dragon, well, he was spectacular. One golden brow rose as he stared back at her.

“Right. We fly.” She swung his pack over her shoulder and stepped forward while trying to tell herself this was all perfectly normal. Her, mounting a mythical creature to go for a spin in this fairy-tale world.

Zayne’s head snaked downward, his warm breath washing steam over her as it drew close.

“Oh, nuh-uh. Don’t you even think about picking me up by your teeth and dropping me onto your back like some giant mama cat.” She shoved his muzzle away. “Just kneel down or something. I can climb.”

Zayne snorted but complied. Spreading his long, golden talons wide, he lowered himself to the ground, then used his nose to give her a careful nudge onto his back. The golden scales looked smooth as glass but had enough texture to offer her a foothold. She hiked up the skirt of her dress—Lord, she missed her jeans back home—and shimmied forward so she sat ahead of his wings. In place of a mane, Zayne had a row of golden, jagged spikes. With no reins, they would have to do. She took hold of the nearest two and cast his watchful eyes a worried look.

Zayne snorted, louder this time, then rose to his feet. Addie gripped the spikes as tightly as possible, sure she’d slip right off, but found herself surprisingly stable on his broad, sleek back. She drew in a deep breath and reminded herself that no matter how scary this might get, one way or another Zayne would keep her safe. Hadn’t he proven that enough times by now?

The dragon beneath her stepped toward the center of the clearing, turned his face skyward, and spread his wings.

“I sure hope you know what you’re doing,” she whispered as she clamped her eyes shut and braced herself for whatever would come next. 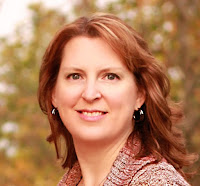 Kyra Jacobs is an extroverted introvert who writes of love, humor and mystery in the Midwest and beyond. When this Hoosier native isn’t pounding out scenes for her next book, she’s likely outside, elbow-deep in snapdragons or spending quality time with her sports-loving family. Kyra also loves to read, tries to golf, and is an avid college football fan.

Be sure to stop by her website www.KyraJacobs.wordpress.com to learn more about her novels and ways connect with her on social media.