S.J. Wright first began writing stories when she was twelve years old. She has been a cashier, a receptionist, a factory worker and has served a multitude of other roles over the years. Her favorite role has been that of a mother to her two sons.

The Undead in Brown County series takes place in Brown County, Indiana. She began writing the series in October of 2010. In February of 2011, she published her first novel The Vampire's Warden as an ebook on Amazon and Barnes & Noble. Since then, she has released five more books in the series.

I’m one of those authors who lets the story direct her. Planning out the book ahead of time sometimes creates a barrier to what might have been really promising alternative ways to tell the story.

Often! My characters are headstrong and a few are quite impulsive. They demand that the story is their own.

I would love to see Europe. I am especially interested in English history and the War of the Roses, so London would be a dream come true.

Almost every setting in my books is based in my home state of Indiana.

Sometimes. I find it helpful to listen to hard rock during exciting scenes.

The Vampire’s Rival is the sixth book in my series, Undead in Brown County. My main character goes through some serious changes in this one. For me, the character was growing a bit stale. I wanted to liven things up, change the situation for her. That definitely happened!

I’ve learned that there are tons of different aspects to self-publishing. You really have to be your own cheerleader, publicist, advertising manager and much more.

My first and second books were much more popular than the rest in my series, so I guess I would try to stick more to the formula I used for those two books as well as the marketing techniques I used back then.

My own personality. I’ve suffered from severe depression for most of my life and have found it hard to be myself in a lot of ways. These books helped change that. Although my characters can be irate and impulsive, it’s a reflection of the things I’d sometimes like to do myself.

Work it out in your head what needs to happen next in your book. Don’t be afraid to write something and have it turn out all wrong. You can always go back and change things. Don’t put a lot of pressure on yourself to be perfect. Just keep writing.

These days, I can probably be described as somewhat hopeful, excited about life and ready for new adventures.

My favorite book has to be The Other Boleyn Girl by Philippa Gregory.

My next series, As the Wolf Runs, will focus on the adventures of two immortals. Kate Wood never expected to be in the position to be handed a sword and given the job of hunting down dangerous rogue vampires. And Alex, her friend and protector, is growing more and more attached and attracted to Kate as they work their way through the dangers of being vampire assassins. Can they survive together or will circumstances tear them apart? 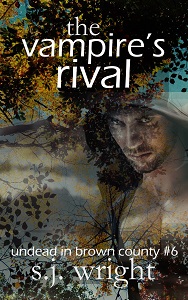 A surprise visitor shows up at Sarah and Michael's lake house in Indiana. His story is one that intrigues and frightens Sarah. What frightens her more is the growing attraction she begins to feel for this new vampire.

Can she choose between Michael and a vampire she barely knows? Or will that choice be taken from her?