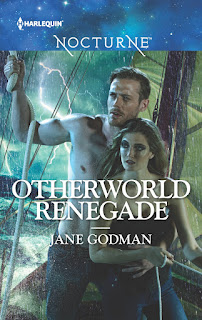 Claiming her felt like his destiny…but could prove to be his ultimate undoing.

Desperate to flee a horrific arranged marriage, Princess Tanzi turned to the only man who could help. Lorcan Malone, infamous necromancer, had vowed to come to her aid whenever she needed him. And even as they traveled from the mortal world into the fantastical Otherworld, Tanzi knew her true need ran deeper than just a rescue.

She was his enemy's daughter. A renegade like Lorcan had no business craving a Fae princess, one intended for a greater calling. Yet he was powerless to resist the pull to do more than protect Tanzi…

Those words, spoken by Lorcan Malone in the heat of battle, must have been a bit of Irish blarney. He probably didn’t even remember who she was, let alone recall their strange encounter on that fateful day. So why, in this moment—when she was in more trouble than she could ever have imagined possible—was she suddenly experiencing a fierce longing for the bad-boy necromancer with the twinkling blue eyes?

It’s called clutching at straws, she told herself. It’s what you’re doing right now instead of facing reality and finding your own way out of this madness.

“What are you thinking, my daughter?” Moncoya, exiled King of the Faeries, watched her face.

“I’m thinking that defeat has unhinged you. That you have finally done what others have whispered of for years and taken leave of your senses.” Never before had Tanzi spoken so boldly to him. Defiance was the trait her twin sister, Vashti, proudly exhibited. Tanzi had always been the acquiescent one. Until now. There were some things she could not bow down and agree to. This was one of them.

Moncoya’s perfect features hardened with fury. His blue eyes, so like her own with their sidhe ring of fire encircling the iris, lit with a brighter inner blaze. His fingers tightened on the arm of his chair so that his knuckles gleamed white in stark contrast to the black polish that decorated his perfectly manicured nails. Tanzi braced herself. His retribution would be swift and merciless. She couldn’t hope to match him in strength, but she might be able to outrun him.

The outcome hung in the balance for seconds that stretched into minutes. Then Moncoya laughed. It was a brittle, mirthless sound that set Tanzi’s teeth buzzing. She knew that laugh well. It had never boded well in her childhood. She didn’t imagine things had changed. Unexpectedly, he relaxed back into his seat.

“My child, you are overwhelmed by the honor I have arranged for you. I should have foreseen this.” He rose, draping a deceptively casual arm about her shoulders. “Walk with me a while.”

They stepped through a set of double doors straight onto a sand-and-shingle beach. The entire island, known locally as the Silver Isle, seemed to be made up of sand. Even the ocher-hued cliffs looked ready to crumble into grit at the touch of a fingertip. Ferns, wild fennel and coarse bamboo grasses clung determinedly to soil that was a combination of granule and dust. Tanzi thought of her father’s palace, of the precisely laid-out gardens leading down to the elegant lake. She glanced back over her shoulder at the beachside villa they had just left. Sea breezes and salt water had taken their toll on its elegance so that it had a faded charm she doubted her father would acknowledge. In comparison with the soaring, white marble palace she had called “home” for all her life, it was a shack. Moncoya was as out of place here as a diamond in a dung heap.

“You made sure no one followed you?” Moncoya withdrew his arm from about her shoulders as they walked along the water’s edge. Secrecy surrounded this hiding place. If he was discovered, he faced trial and inevitable execution.

“Of course.” Tanzi was offended at the question. Would he have asked Vashti the same thing? She doubted it. Yet we both trained with the Valkyrie. We are equally astute when it comes to warfare and subterfuge. It came back to the same weary argument. The same reason Tanzi had been summoned to be the recipient of his latest piece of “good news” instead of her twin. Moncoya viewed Vashti as the son he had never had. Tanzi’s only value to her father was as a pawn in the marriage stakes. Not this marriage, father. The sacrifice you are asking of me is too great.

“Tell me what has been happening at the palace in my absence.” Three months had passed since the cataclysmic battle that had forced Moncoya into hiding. It felt like three years.

“There is a peacekeeping council known as the Alliance in place. Each of the Otherworld dynasties has representation on it. The Alliance itself is led by Merlin Caledonius.”

Moncoya’s expression hardened further at the name. “That half-blood cur will pay dearly for his part in this.”

Merlin, the greatest sorcerer the world had ever known, was Moncoya’s half brother and the man who had brought about his exile. Cal, as he preferred to be called these days, had widened the existing gulf of hatred between the two men further by falling in love with and marrying the woman Moncoya had hoped to make his queen.

Tanzi paused, looking out across the turquoise waters toward the horizon. She drew a deep breath. “My father, you wrong him. He is man of conscience who is doing a fine job of uniting the dynasties…” Moncoya’s growl of rage told her she had gone too far.

“Am I, the greatest leader Otherworld has ever known, to be forced into hiding while he lives in luxury in my royal palace? Am I to endure the knowledge that he has stolen the necromancer star, the woman I chose as my own, from under my nose? Must I kick my heels in this backwater while you, my own daughter, take the seat that should be mine at this pathetic council table—” He broke off, his voice ragged. When he spoke again, his tone was softer, the words a caress. “But you know nothing of these things, my child. It is wrong of these men to ask you to involve yourself in their political machinations. They seek to trick you.”

Tanzi bit her lip. How could she explain it to him when he insisted on viewing her as a helpless dupe? Being part of the Alliance had brought her new life. Oh, she had been regarded with suspicion initially by many of the council members. She was Moncoya’s daughter, after all. They saw her as the spoiled brat sidhe princess who had been his consort—his puppet—in the past. Together with Vashti, she had blindly carried out his wishes. But things had changed three months ago on that battlefield. She had changed.

A pair of laughing Irish eyes came into her mind once more and she determinedly dismissed them. Cal and his wife, Stella, treated her as their equal, and with their help she was learning how to be the voice and conscience of her people. She was developing an understanding of compassion and democracy. Tanzi cast a sidelong glance at her father. She was learning that there was a way to rule other than Moncoya’s iron-fisted style.

“Let us leave this talk of the mongrel sorcerer for another day. I look forward to dealing with him when the time comes. This marriage I have arranged for you is the highest distinction ever to be bestowed upon a woman. Through this union, I will not only be able to come out of this undignified hiding and return to my palace, I will be the undisputed ruler of all Otherworld.” Moncoya’s lips thinned into a smile. “There will be no need for their puny Alliance when that day dawns.”

“And what of me, Father? While you become all powerful, what will I become?”

He paused then, perhaps considering for the first time the true implications of what he was asking of her. Such was his arrogance, she might have known he would not allow her feelings to influence him for long. “You will be revered above all others.”

His face was set. The silken note in his voice made the threat even more menacing. “You have no choice.”

“By all the angels, Father, you cannot intend to force me into this!”

Moncoya’s lips smiled but Tanzi’s heart quailed at the look in his eyes. “Given the bridegroom I have chosen for you, might I suggest you refrain from speaking of angels in the future?”

Jane Godman writes in a variety of romance genres including paranormal, gothic and romantic suspense. Her Otherworld series is published by Harlequin Nocturne and she has a new series coming out soon with Harlequin Romantic Suspense. 2017 will see the publication of a new paranormal series for SMP Swerve.

Jane lives in England and loves to travel to European cities, which are steeped in history and romance—Venice, Dubrovnik and Vienna are among her favorites. Jane is married to a lovely man and is mom to two grown-up children.