Author Interview: Pages of the Mind by Jeffe Kennedy

Jeffe can be found online at her website: JeffeKennedy.com, every Sunday at the popular Word Whores blog, on Facebook, on Goodreads and pretty much constantly on Twitter @jeffekennedy. She is represented by Connor Goldsmith of Fuse Literary.
***
Do you plan everything or just let the story flow?
I plan really nothing at all. Even when I have an idea of where the overall story is going, I don’t feel like I am deciding it. It’s more like life—what happens, happens.
Do your characters ever want to take over the story?
I think when authors say this, they mean that they have a plan and the characters wrest it away. I feel like when I write that I’m riding around in the characters’ heads, so they’re always in charge of the story.
What is your favourite food?
Does wine count?
Are you a morning person or a night owl?
More morning person these days. I used to be more of a night owl, but I do my best writing in the morning, so I retrained myself to get up early.
Where do you dream of travelling to and why?
Lord Howe Island – because I love to snorkel and I’d love to see the wildlife in that part of the world.
Do distant places feature in your books?
Definitely! I often make them up that way, too.
Do you listen to music while writing?
No. I did when I was first starting out, as a way of creating a writing ritual. Now I prefer total silence.
Could you tell us a bit about your latest release?
I have two books coming out on May 31. One is a novella, THE CROWN OF THE QUEEN, that will be in a duology with Grace Draven called FOR CROWN AND KINGDOM. That story takes place in the immediate aftermath of THE TALON OF THE HAWK, which concluded The Twelve Kingdoms trilogy. It’s told from the point of view of Dafne, the librarian who accompanied all three of the princesses in the original trilogy on their journeys. This one relates a short, but necessary tale of picking up the pieces of the end of one reign and establishing a new one. The other release, a novel called THE PAGES OF THE MIND, kicks off the next stage of the story, in a series called The Uncharted Realms. In that Dafne goes on an adventure of her own, along with Jepp, best scout in the Hawks, and Zynda, a Tala shapeshifter and sorceress.
What have you learned about writing and publishing since you first started?
I’m much better at writing consistently and at trusting the revision process. The ways I’ve improved my craft would taka book to detail! As far as publishing, I’ve learned that trends come and go. I don’t get too worked up about the latest crisis or the most recent fad. Whenever events threaten to distract me, the best thing I can do every time is put my head back in my own work.
Is there anything you would do differently?
I’d say that I wished I’d developed more diligent writing habits sooner and followed up on books I had out there. But I also believe we do things as we can. I wasn’t capable of doing those things at the time, for many reasons.
Who, or what, if anything has influenced your writing?
Everything has! I’m a lifelong reader and have an extensive education. I’m a big stew of influences, which is how it should be, I think.
Anything you would say to those just starting out in the craft?
It really does work to write every day in a way that nothing else does. Build the habit of generating words. Write regularly.
What are three words that describe you?
Driven, enthusiastic, positive.
What's your favourite book or who is your favourite writer?
I don’t have one favorite. I read widely across many genres. Two books I’ve re-read more than any others—for different reasons at different times—are J.D. Robb’s NAKED IN DEATH and Anne McCaffrey’s DRAGONFLIGHT. 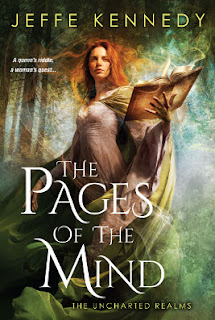 Blurb of your latest release or coming soon book
The Pages of the Mind
AN ORPHAN’S THRONE
Magic has broken free over the Twelve Kingdoms. The population is beset by shapeshifters and portents, landscapes that migrate, uncanny allies who are not quite human…and enemies eager to take advantage of the chaos.
Dafne Mailloux is no adventurer—she’s a librarian. But the High Queen trusts Dafne’s ability with languages, her way of winnowing the useful facts from a dusty scroll, and even more important, the subtlety and guile that three decades under the thumb of a tyrant taught her.
Dafne never thought to need those skills again. But she accepts her duty. Until her journey drops her into the arms of a barbarian king. He speaks no tongue she knows but that of power, yet he recognizes his captive as a valuable pawn. Dafne must submit to a wedding of alliance, becoming a prisoner-queen in a court she does not understand. If she is to save herself and her country, she will have to learn to read the heart of a wild stranger. And there are more secrets written there than even Dafne could suspect…
List of previous books if any
Negotiation: A Twelve Kingdoms Novella
The Mark of the Tala
The Tears of the Rose
The Talon of the Hawk
Heart’s Blood
(This is a spinoff novella that stands alone but takes place in the Twelve Kingdoms. The characters in this make a cameo appearance in THE CROWN OF THE QUEEN.)
THE CROWN OF THE QUEEN
The Pages of the Mind
THE EDGE OF THE BLADE (out December 27, 2016)