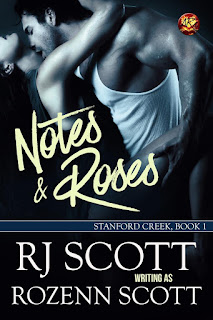 It’s time to stop running and take a stand…for love.

Former boy-band singer CJ Taylor is starting a new life. His stalker is behind bars, he’s taken back his birth name, and he’s bought a house in a small Vermont town. As Cody Brennan, he finally feels safe and wants to write new music and forget about his tragic past, but an accident nearly ruins everything.

Florist Megan Campbell is horrified when a stranger, covered in blood, collapses in her shop. Cody’s erratic behavior startles her at first, but as he recovers she becomes very attracted to him. Her family thinks she should curb her feelings, and worries about her safety—she worries about her heart.

From her amber eyes to her tempting smile, Megan is everything Cody promised himself to avoid. The more he gets to know her, the more he wants to stay. When his past begins to catch up to him in the form of violent threats, will they stay safe long enough to fall in love?

Megan Campbell stepped away from the cash register of Notes & Roses and leaned against the back counter. She put her right hand in her jeans pocket and, as carefully and unobtrusively as possible, removed her cell phone and scrolled to Justin’s name. What should she text her brother? Help sounded like a good start. Or possibly, there’s a man in my shop and I think he’s drunk or stoned.

Yep, text something like that to Justin, and he would come in guns blazing. Then he’d pin the weird guy to the floor and read him his rights. And the man currently staring at a wall didn’t look dangerous, just lost. Homeless, maybe?

Something more specific then, like, there is a vagrant in here, and he needs help, what should I do? The man moved a little. Away from her side of the store, the “roses” part of the setup, and over to the “notes” side. He was peering at the shelves, a collection of stationery and household bits and pieces like cushions and local crafts. He stumbled a little, turned to the side, and looked up at the posters displayed on the far wall. Landscapes of Vermont: rivers, small towns and red high-sided barns with gently rolling hills of emerald green.

He’s talking to the wall now. Should she add that to the text as well? This was going to end up being a hell of a lot of typing to explain what he was doing. Despite how odd it all looked, the visitor wasn’t threatening her. Also, Rachel would be back soon. Maybe between them they could sort this out?

He hadn’t even spoken to her, but something wasn’t right. Maybe it was the way he’d been standing, his hands fisted at his sides, staring now at the new Valentine’s wall display of flowers and hearts. Maybe it was the way he was dressed; dark jeans caked in mud, heavy boots that had tracked in the same mud. Not to mention the black hoodie with the hood partially hiding his face from her view.

Or maybe it was the despair in his hunched shoulders, the utter defeat in the way he had to support himself to stand.

Whatever it was, Megan was faced with two options. Talk to the strange man in her shop while she was alone in here, or call in reinforcements in case things went south.

Her visitor moved, not his feet but his fists, unclenching and bringing his hands up to knuckle his eyes and then cover them. Megan’s cop brother liked to explain these things to her, but she didn’t need his help to recognize when despair in someone turned to anger.

She sent the standard 911 text, startled when she looked up and saw the stranger had stepped closer to her while she’d been distracted.

“Where am I?” he asked, his voice very soft.

He shook his head. “I need the music. Someone took it, and I need it.”

Okay, this was so not going the way she wanted it to go. He was incoherent. Maybe he was homeless and needed a place to get out of the persistent snow that had plagued Stanford Creek the last few days. He’d evidently been somewhere slushy and muddy, if his clothes were anything to go by.

“I don’t understand, sir; what music do you need?” she asked, and waited for him to acknowledge her question. Instead, he took another, shaky, step forward, and covered his eyes again. “Hello? Can I help you?” she repeated when he didn’t look at her.

That finally got his attention. His hands came down, and she got her first clear look at his eyes and face. What she saw had her reaching to send another text. He had blood on him, smeared down from his temple into his wild beard, and his blue eyes were bright with something. Drugs maybe? Long, dark hair hid some of his features, and he looked like he was about to keel over.

“Where’s the music?” he mumbled, his voice low and urgent. He gripped his temples hard and stumbled back, knocking a display of greeting cards to the floor. The sound was a loud clatter in the otherwise quiet room. “Shit… I didn’t…”

“Sir?” This time she was within reaching distance as he rounded on her, his lips pulled back in a snarl—or a grimace of pain, she couldn’t be entirely sure. Whatever, it wasn’t the look of someone who wanted to be spoken to. Time to leave. She glanced at the front door, imagining the steps between here and there and whether or not he would lurch her way. When she focused back on him, all she saw was a situation that could get out of hand. He was a good six inches taller than her five-nine, broad and built, with tattoos curling around his wrist, disappearing up under the sleeve of the hoodie.

Everything about him looked wrong. He didn’t move again, or even acknowledge her; all he did was stare with bright sapphire eyes, focused on a point behind her, scary and intense and so damned fixated with his expression in that scowl.

“What happened?” He groaned and covered his eyes again. “Call… Zee…”

She texted without looking, only glancing at the screen briefly to make sure she was sending another text to her brother and not some random person on her list. 911. Again. The standard sibling instruction for help me right the hell now, reserved for having one of her brothers rescue her from one of her many dreadful first dates. Garrett wasn’t even in town, so there was little point texting him, and Justin may not even be in the sheriff’s office. She hoped to hell he was, though, and had read her message. She’d know soon enough because the small sheriff’s office was close.

And still the stranger stood there, staring at her. At least he hadn’t moved any closer.

He closed his eyes and wiped the blood that was trickling down his face, looking down at his hand and staring at the red that streaked his skin. Megan thought she heard a sob, but couldn’t be sure. Compassion welled inside her. Vagrant or not, dressed in soiled clothes and with the hood up, he didn’t have to be a criminal.

“Sir? Do you need help?” She held out her hand, but he stepped closer to her and damn it, she may have had self-defense training but she wasn’t stupid. If the man was hopped up on drugs, she had to stay out of reach. The door opened and Justin stepped in, all uniform and pissed-off attitude.

Megan inclined her head to the man Justin evidently hadn’t seen in his dramatic entrance. Justin could handle himself, and he had a gun; he’d know what to do.

“What the hell?” Justin said as he assessed the situation, his hand automatically resting on his holstered weapon.

“I think it’s drugs,” she said loud enough for Justin to hear. The man looked at Justin and then to her, before shaking his head a little.

“No.” The voice was raspy, little more than a growl. “Not those.” He appeared to be struggling to talk, and he pressed his hands to each side of his head. “Just the music; Zee will know,” he added, but his voice slurred, and he coughed and doubled over.

Justin pulled his weapon and held it to one side, his other hand held in front of him as he stepped closer. “Sir? Are you hurt?”

Megan saw her brother’s hand on the sidearm, the other placating and suggesting and warning at the same time. She’d seen him stand like this when he broke up the fight at the drugstore. Not that he’d drawn his weapon then; he’d dealt with it by intimidation alone, because everyone involved lived in the town and no one messed with the sheriff. Megan looked at her brother, who teased her, who’d hidden her dolls and pulled her pigtails as a kid, but who was now in a situation that was serious. He was all business.

The stranger stepped back from him, straight into a pile of notebooks this time. The shelf shuddered and some of the display tilted. The movement translated into Justin grabbing the man’s hoodie to stop him falling as he flailed and attempted to stay upright.

He took a swing at Justin, who ducked and swerved. The attempted hit missed Justin by a mile, and the man followed the momentum he had begun, smacked his fist against a shelf edge, and collapsed in a heap on the floor. Then he didn’t move, was absolutely still. Justin holstered his weapon and crouched next to the prone form of the hooded man, checking for a pulse and then talking into his radio.

RJ Scott is the bestselling author of over ninety romance novels and novellas. From cowboys to millionaires, SEALS to cops, her stories are passionate, sexy, and always come with a guaranteed happy ever after. RJ also writes as Rozenn Scott for her new line of strong men and women who find that it’s always worth overcoming obstacles to find a forever love.
RJ lives just outside of London, and has never met a bottle of wine she can’t defeat.

For more information on other books by RJ/Rozenn, visit her website: www.RJScott.co.uk

3 Copies of an ARe A Shades of Naughty ebook