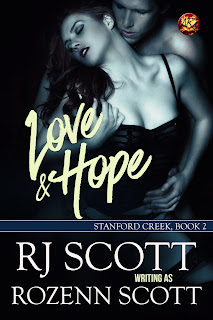 Falling in love can be easy if you want it badly enough.

Danny Hudson has finally found a place to stop. With his daughter Hope in his arms, and his place in the music group Hudson Hart gone, he has a future to plan and a family to raise. Staying at his friend Cody’s house is hard enough, but finding a home of his own is impossible. A place to stay over the coffee shop in town is a godsend, but it comes with one proviso—he must work the cost of the room off in redecorating and rebuilding.

Rachel has secrets that she doesn’t even want to admit to herself, let alone her close-knit family. Dating the wrong guys is one way to protect her heart, but meeting Danny could change all that.

Can Rachel ever get past the reasons why she thinks real love isn’t possible and realize that love is the only thing that actually matters?

For a few seconds he stood absolutely still, resting his head back on the wall, looking up at the squares in the ceiling. The door to the bathrooms opened and he immediately straightened, no way was he letting anyone catch him looking like he’d just got bad news. His eyebrows raised when he realized it was Rachel coming out from the ladies, her heels in one hand, an empty bottle of wine in the other, and she looked disheveled. He’d never seen her go in, so she’d probably been doing whatever girls did in bathrooms for such a long time, talking, or whatever. But no one else came out after her. And yeah, she looked wild-eyed and messed up. He couldn’t think of another word for it, her dress creased and rucked up on one side, her eyes bright, and a wide grin on her face.

“Hey sexy-Danny,” she slurred and gestured with the bottle which missed his arm by an inch. “You waitin’ for me?”

Danny pocketed his phone and relieved her of the bottle, placing it carefully on the floor before she beaned him with it. Then he took her arm when she wobbled dangerously.

She blinked up at him like this was a new thing to her, then giggled. Yep, full on giggled, before leaning on him and grasping his shirt in a fist. “I know.”

He held her so she wouldn’t fall, which necessitated one hand on her left arm, the other on her right hip. She was just the right size for the hold, fit into his arms just perfectly, despite the fact she was swaying. Then she moved, and ended up with her cheek on his chest, her heels dropping to the floor.

“Your chest,” she murmured against him.

“My chest what?” he asked, although he knew he wasn’t going to get an answer. He looked around in the vain hope someone was here to help her.

She pulled back, and he supported her again, and she looked up at him, her jade eyes swimming with tears. Then, in a messy uncoordinated movement, she went up on tiptoes and placed a wet kiss on his lips. Her aim was a little off, it was more half lip half face, but there was tongue, and Danny had never had such a sexy, unsexy, kiss before in his life. Didn’t matter that she was gorgeous and Danny really wouldn’t have minded a kiss. Nope, she was drunk, and needed her family, not some exhausted dad with brittle walls of protection.

He pressed her away gently, even as she chased for the kiss, and held her at arm’s length. She frowned at him.

“What’s wrong? Everyone wants to kiss me,” she announced.

This was clearly some kind of post trauma thing going on here. That confrontation with the guy in the garden had probably caused it. “I’ll get your mom.”

She yanked herself away, stumbling back and righting herself by leaning against the wall on the opposite side of the corridor. “Him? No,” she said.

She closed her eyes momentarily then opened them as she sighed. “Why don’t you want to kiss me?” she said.

Rachel pulled herself straight, and took the two steps to get back into his space, shoving him a little, and he was in the small alcove by the emergency door, his back to the glass.

“No. I’m. Not,” she said, very deliberately. Then she wrapped her hands around his neck. “I just need a kiss,” she murmured. “A nice one from a nice man.” The last she said really quietly and he had to strain to hear the words. And then he couldn’t think anymore. She pressed her lips to his, but not sloppy drunk and off target. No, this was calm, gentle, her tongue tasting the seam of his lips, and pressing for entrance. He could fight it, he could extricate himself if he wanted to, but his head spun with the bad news he’d gotten from Sam, and Rachel was as sexy to taste as she was to touch.

His lips parted and he deepened the kiss; he tasted wine and Rachel, and it was every bit as good as he’d imagined it would be. Call it the emotional intensity of that phone call or call it proximity, whatever it was, he was hard so damn fast. Hard and needy, and all he wanted was more of whatever Rachel was offering.

She pressed closer, his hand caught between them, he only had to move it a little, and he was caressing her belly. A little lower and she pushed at his hand so he cupped her mound, and she moved against him sinuously, a moan low in her throat.

And it was that moan that had him crashing back to reality. What the hell was he doing kissing a woman who was obviously drunk, and pressing against her like that?

Gently but firmly he disentangled himself and eased her away. She chased for the kiss, her eyes closed, but he couldn’t let this go on. She opened her eyes on a small sigh, and he could see the moment when reality crashed into her thoughts. Her eyes widened and she stepped back, a hand covering her mouth.

Then she slid her way down the wall, smoothly, until she was on the carpet. He crouched down in front of her.

“No, don’t go, I don’t do this, not since college,” she said, so quietly he had to strain to hear.

“Getting drunk, you mean?” he asked.

RJ Scott is the bestselling author of over ninety romance novels and novellas. From cowboys to millionaires, SEALS to cops, her stories are passionate, sexy, and always come with a guaranteed happy ever after. RJ also writes as Rozenn Scott for her new line of strong men and women who find that it’s always worth overcoming obstacles to find a forever love.

RJ lives just outside of London, and has never met a bottle of wine she can’t defeat. For more information on other books by RJ/Rozenn, visit her website: http://www.RJScott.co.uk

3 Copies of A Shades of Naughty book