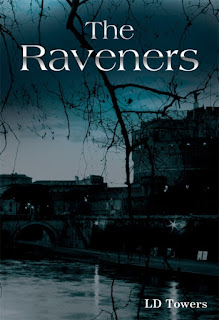 On 26 May 1897, Bram Stoker brought us the story of Dracula; an undead creature who terrorised the living by drinking their blood. He based his creature on the legends of Ireland and Eastern Europe, bringing it to life with all the pomp of Victorian literature. What if his concept was correct, but the execution was not? What if there was not one creature, but a band of twenty-four? Crusader knights who committed such a terrible act that the Pope of Rome and the Rabbis of Jerusalem joined together in petitioning God to bring a terrible curse upon them.Sentenced to eternal life as punishment for their crimes, yet hounded by both the clerical and the secular as they struggle to live them. The Jews called them Ga’ashekelah: the Raveners. To the Catholic Church, they are the Accursed Ones. Feasting on the bodies of the living to maintain their power.

What starts as a simple trip on the Eurostar to the buried trenches of World War One in Northern France is going to take Imperial War Museum expert Dr. Alexandra Horne on a journey she could never have conceived. From the bustling streets of Paris to the azure waters of Collioure and the very Vatican itself, Lexa will discover the Raveners and those who have sworn to hunt them down.


Excerpt:
She found herself going from map to map. This was sometime around the second phase of the battle, before Beaumont-Hamel was finally taken. Thiepval as well. “This must be from the middle of September 1916. Maybe October. It’s obvious from this that he was trying to bring men around to penetrate the Allied lines from the areas they couldn’t budge.” She found herself gnawing on a thumbnail. “Dear God! With a counteroffensive like this, he might have shifted them. It’s a bold plan. Whether or not he could have managed it, with the Germans bleeding to death at Verdun, would have been the question. But damn! This might have changed the battle. Maybe even the war.”
“I wondered about that.” Another voice behind her.
Lexa turned and coloured, realising that in her wonder she had completely ignored the stranger in the room. “Oh! I am Sorry! Dr. Lexa Horne of the Imperial War Museum.” She held her hand out.
“Dr. Jack Bennett. Pleased to meet you.” Bennett was a large, fit man in his mid fifties with close-cropped, iron grey hair and a face lined from years digging in the sun. He had a bit of the George Clooney about him and Lexa was sure that all the archeology undergrads wanted him as a prof. He was a trifle swoon worthy. “Call me Jack. It was great that you could come out here at such short notice. We will be wrapping all this up in the next week or two.”
“The pleasure is entirely all mine,” Lexa told him in all earnestness. “This is simply unbelievable. This is like walking into heaven for me.” Ok. A small lie. Dead men and unexploded ordinance aside, it was heaven.
Bennett gestured back with his head and stepped aside. “I doubt the major there would agree.”
Lexa gasped as she saw the body at the desk. He was perfectly mummified, just as Darby had told her. He was hunched over, as if sleeping, and his golden hair gleamed in the light. His skin was the colour and texture of tanned leather, and his lips under a large moustache had pulled back to show his teeth. His head lay on on crossed arms, sunken eyes closed in eternal repose. The fingers were slightly curled; a large ring on one hand and a wedding ring on another. His light blue uniform hung on what was left of his frame, but was in decent condition through the shoulders. In fact, there were no real decomposition of the fabric. His side arm rested on the chair, the belt having slid down with time. The silver bullion on his uniform had a dull tarnish and the aiguillettes on his shoulder seemed suspended as if by magic. Beside him, his uniform cap was on the desk.
“Oh dear God!” Lexa exclaimed. “You’ve just left him there? How could you do that?”
“The question is how to get him out of the trapdoor without disturbing him. We have another specialist coming in from Germany. He is one of theirs, after all,” Bennett shrugged. “And you know the Germans. They are trying to find the right person. I would move him, but he is perfectly preserved. Outside of this environment, I expect he would not last long. It seems a shame to compromise his remains unnecessarily.”
The body rooted Lexa to the spot. She felt a terrible weight on her chest. “I’ve never seen a dead body before.”
Darby walked over and put a hand on her shoulder. “It’s ok. He can’t hurt you.”
“It also feels a bit indecent to be looking at him.” But she found she couldn’t tear her eyes away.
“We treat all remains with the greatest respect,” Bennett said quietly. “As you know, there is a lot we can learn from him. He is so perfectly preserved. When we have learned from him, we can return him to his family, if they still exist. He can be reburied with honour. He was lost and we found him. There is nothing indecent about that.”
“I just feel so strange with him there. I feel like a thief in his home.”
“The first time you see remains is always the hardest,” Darby told her. “Just remember that he is gone. What made him a person is gone. He is in a better place.”
Lexa nodded and walked closer to the desk. Her mouth was rather dry but now curiosity was getting the better of her. They were right. She was just being a ninny. Yes. This man was dead and he couldn’t hurt her. “Yes. I suppose you are right.”
Bennett quirked up a little smile. “Just don’t touch him.”
It was the moustache. The moustache was so familiar. Even in death, it had that upwards curl which was so familiar. A vain bushiness. When she had seen it in pictures, it always made her smile. “I think I know who this is!” Lexa exclaimed and reached into her bag for her iPad.

These are the songs I wrote a lot of this book to. It’s an eclectic mix. :)
https://www.youtube.com/playlist?list=PL7G7y7QdAb_vsF5jvBZ1upujxsNLHJUxy

LD Towers travels the world like a rootless vagabond! A military historian, she searches out places of conflict to find a deeper insight to the things she writes about. Presently enjoying the warm weather and azure seas of Central America, she has lived all over Western Europe, including 5.5 years in the incomparable Berlin.

Primarily working in Historical and Military Fiction, LD sometimes sneaks in the odd Dystopian or Modern Thriller piece. In fact, her new book is a complete redo on the vampire concept. Look for The Raveners; coming September 20, 2016.
https://ldtowers.net