Author Interview & Giveaway Children of the Veil by Colleen Halverson 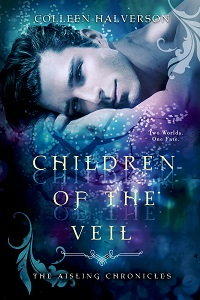 Elizabeth Tanner has one goal: to find her mother in whatever dimension she’s imprisoned. But to do that, she has to face her estranged father, and to do that, she needs a shot of whiskey…or seven. But after an attempt on her life and the return of her lost love, she wakes up with one hell of a hangover and a whole barrage of questions.

Finn O’Connell doesn’t know why the Fianna want him to aid Elizabeth in her search, but he’ll take any excuse to be near her again. Together, they dive headlong into the shadows of her mother’s secrets and find themselves embroiled in a Fae rebellion that will test Finn’s loyalties and their love.

With the Faerie realm verging on chaos, Elizabeth and Finn will embark on a quest that will lead them from the streets of Chicago to London’s seedy Fae underground. But rescuing Elizabeth’s mother means journeying to a place Finn can’t follow, and Elizabeth is forced to make a choice between finding her at last or saving her own soul. 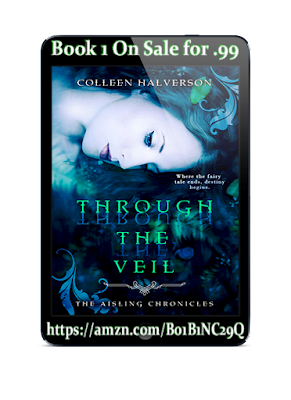 Elizabeth Tanner has one goal: find her mother and free her. But after an attempt on her life and the return of her lost love, her search leads to more questions than answers. Finn O’Connell doesn’t know why the Fianna want him to help Elizabeth, but he’ll take any excuse to be near her. Diving into the shadows of her mother’s secrets throws them into a Fae rebellion that will test their love, and rescuing Elizabeth’s mother means making a choice between finding her or saving her own soul. 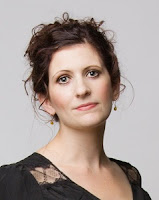 As a child, Colleen Halverson used to play in the woods imagining worlds and telling stories to herself. Growing up on military bases, she found solace in her local library and later decided to make a living sharing the wonders of literature to poor, unsuspecting college freshmen. After backpacking through Ireland and singing in a traditional Irish music band, she earned a PhD in English with a specialization in Irish literature. When she’s not making up stories or teaching, she can be found hiking the rolling hills of the Driftless area of Wisconsin with her husband and two children. CHILDREN OF THE VEIL is the follow up to her debut urban fantasy novel, THROUGH THE VEIL.

CHILDREN OF THE VEIL came out of my head fully formed. I had no idea what the story was going to be before I began it, but I did have a bit of a vague notion where I wanted to end up. Elizabeth and Finn have a tendency to drag me to some wild places, and most of the time I have no choice but to follow them. I’ve become a bit more responsible lately with trying to plan novels, but I write to discover and I believe my best ideas arrive in the moment of composition. Every time I start a book, I’m like Bilbo Baggins running through the shire, shouting, “I’m going on an adventure!” Sometimes I have moments where I might need to pause, backtrack, regroup, brainstorm, but I always push forward. Every novel I’ve written has been an incredible journey, and I always emerge a different person at the end of writing one.

Oh, yes, absolutely. My characters always ruin my good intentions! But this openness works for me. When I don’t listen to my characters carefully, that’s when the story rings false. It may take me several drafts to understand their motivations and sometimes their choices just baffle me, but I keep digging in my revisions to discover the core truths that fuel them and decisions. If a character says, “We’re going into the spooky woods,” then we’re going in the spooky woods, regardless of whatever it is I had planned.

Sushi. I live in the country, so I only eat it about once or twice a year on my birthday. The waiter always asks if anyone else is coming to join me…

Neither? Maybe both? As a wife, mother of two small children with a full-time job and a lot of crazy characters to take care of, my schedule is really not my own. I’m up at the crack of dawn getting kids to school and going to work and then writing and editing well into the night. I hope someday I’ll have the luxury to choose one! :)

My husband and I travel a lot, but one day I would really love to go to Nepal and backpack through the foothills of the Himalayas. I’ve always been attracted to the mountains, and I’ve been a practicing Buddhist for almost ten years now. I would love to visit the ancient temples and see the dramatic views firsthand.

Yes! Elizabeth and Finn travel to all sorts of distant places like Ireland and London. They also travel to the Faerie realm and the fourth dimension, but I’m not sure if that counts.

Always. I wrote most of CHILDREN OF THE VEIL listening to the latest Of Monsters and Men album, Beneath the Skin. When I’m feeling unmotivated, I snap on my noise-cancelling headphones, set that on rotation, and I’m flying.

CHILDREN OF THE VEIL is the sequel to my debut novel, THROUGH THE VEIL. Readers who followed Elizabeth and Finn through the first book, will go on a journey from Chicago to the Faerie realm, to London as they search for Elizabeth’s mother. It contains a lot of romance, but it’s also a story about family secrets and the power of complete and unconditional love in the face of incredible adversity. In many ways, this is also a bit of a coming-of-age story for Elizabeth. In THROUGH THE VEIL, we see Elizabeth come into her Fae powers, but in CHILDREN OF THE VEIL, we will see her struggle as she learns to wield and focus her abilities.

Ah, where to start with this question? I think the one thing I’ve learned about publishing is to stop looking for validation from others—in editors, readers, reviewers. I think when I first started out, I was so terrified of being awful, so I sought out confirmation of my talent in anyone who could supply it. But this way madness lies! What I’ve learned is that you have to have complete and utter belief in yourself, your voice, and your creative vision. This doesn’t mean you turn away from valuable feedback and criticism, but you have to be prepared to stand by your work and radically accept the fact that you are on an artistic journey. Whether people love your writing or not is inconsequential, in the end. The question for you, the writer, is not “did people like this?” But rather, “am I a better artist for creating this novel? Am I walking away from this experience a little wiser? A little stronger in my storytelling abilities?” If the answer is yes, then you cannot fail.

No. I have been truly blessed by my experiences in publishing so far. Perhaps the only thing I would have done differently is to start writing sooner.

I grew up in a family of professional musicians, so music has been a big part of my life. I also sing and play guitar. I think growing up in that creative environment really helped fuel my commitment to my craft, but more importantly, I saw a lot of the struggle, the rejection, and the business side of things. My father is a composer and he wrote every night after teaching college band. My brother is a jazz musician and is now a professor, but he practices several hours a day. Talent is important. The love is important. But artistic success is a marriage between that passion and a lot of hard work.

Everyone sucks at first. Everyone. I once read an excerpt from a first draft of The Great Gatsby and I was horrified by how just god awful it was. Excellence takes time and many, many revisions. You need to give yourself time to experiment, try different things, and uncover your voice. It’s not something that happens overnight. Also, find your writing tribe. If you’re serious about writing, find people who have similar goals and swap your work at every possible opportunity.

Charlotte Bronte. The voice in Jane Eyre still reads as strong and fresh as it did 150 years ago.

Signed copy of THROUGH THE VEIL, Book 1 The Aisling Chronicles

Signed copy of CHILDREN OF THE VEIL, Book 2 The Aisling Chronicles

A select collection of pins, patches, and stickers from Creepy Company
https://www.creepycompany.com/

OPEN TO US ONLY