Time Travel has always fascinated me. I guess that because growing up I read both science fiction and romance, it was inevitable that I merge the two and write paranormal romance. I count Time Travel romance in the category of paranormal. The thing I like about writing time travel is that you get to go to an entirely different place and historical period with every book, if you want. That means new research, maybe even a trip to the area, and I consider that a lot of fun. It keeps writing interesting—very important when I work about six to nine months on every book.

When I decided to write The Mists of Time about Camelot, I already knew a lot about the south of England. I think I’ve been to Great Britain about eight times so far. Cornwall was a special favorite. I’ve been to both Stonehenge and Avebury, locations of two very different kinds of standing stone circles, and I know both the mountains and gorges, and the lovely flat plains of Devonshire, Somerset and Wiltshire. But for this book, I also got to research Camelot—the real, historical version in 450 A.D., not the pretty medieval castles with pennants flying that you see in movies. I wasn’t surprised that Arthur and Mordred were real characters, but I was a little disappointed that Lancelot doesn’t appear to be historical at all. He was first introduced in the 12th century.

The other fun thing about time travel is that you get to fool around with what would have happened if you changed something about history. And that is absolutely crucial to the story in The Mists of Time. Diana Dearborn makes a terrible mistake, and she and Gawain must put time right again. In the process they fall in love and put themselves right again too. They will both be forever changed in The Mists of Time. By the way, want to see the origin of Leonardo’s wonderful machine? You can find it in One With the Darkness, in my Companion Series. 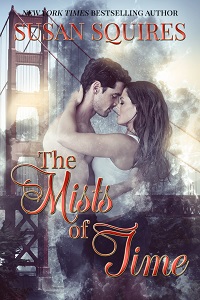 Diana Dearborn knows all about romance, at least in the books she writes. But passion eludes her in real life—until she’s offered the chance to travel back in time to Camelot. The world of King Arthur and Guinevere is nothing like she pictured, and neither is the knight she encounters upon her return to San Francisco: Gawain, the hero of her current project. He’s complicated, mysterious, and sexier than anything her imagination could conjure. And he’s been waiting for her…

Now, joined together in a desperate race, Diana and Gawain must prevent an ancient, evil force from wreaking mayhem in the all-too-real present. Diana must learn to trust Gawain, even while she encounters secrets about her own past. But even if their mission succeeds, does Diana’s destiny lie with this man from another time—and will their love alter history forever?

Excerpt:
Making love to her had been a miracle. Gawain couldn’t regret it. The way she opened to him, the way she trusted him. He’d worried when she was so hesitant. He’d wondered if she was too damaged by her previous experience.
Had he been gentle enough with her? It had cost him every ounce of his control to go as slowly has he had, when he wanted to claim her as his own, fast and fierce, with the right to protect and defend her, the right to make love to her, for them to bear children together and stand together against all comers.
Gawain felt her stir in his arms. She still had her sleep shirt on, though it was entirely unbuttoned, leaving her soft breasts pressed against his chest. He had captured her thigh between his own as she dozed after sex. This was how they should sleep together, always.
She wiggled the leg between his. He opened his thigh immediately. “Did your leg go to sleep?”
“No. I just liked the feel of it against your, uh, you know.’
He raised his brows. “Against my ‘you know’? Those are my bollocks and my cock you’re speaking of.”
Her eyes went dark. “Yes.”
“I know you know those words. You use them in your books.”
“Yes.” She cleared her throat. “Well, it’s a little different saying them to someone in real life.” She cleared her throat again. “I, uh, I hope it was okay for you.”
“Yelling is a clue. You don’t often get yelling.”
She tried to suppress a smile and looked down.
He felt his cock springing to new life. Would he ever get enough of her? “I’m not sure your research is yet complete if you have to resort to ‘you know’ to describe things.” He rolled over on his back and scooted her over next to him. “Don’t you think you should explore a little yourself? Just in the name of research.”
She grinned but looked away.
“You can’t possibly be shy after opening to my mouth the way you did.”
“Was…was I too brazen?” She looked stricken.
“A man likes his woman to be lady in public and brazen in bed. You were perfect.”
“So, uh, I should be brazen now.” She slid a glance down to his groin.
“Yes.”
She took her lip between her teeth as though she were girding her own loins. “I suppose you know that all those things I wrote in my books—they were pretty much just words to me. I know the words well enough but…”
“But you should explore the reality,” he said.
She smiled shyly. “If you’re sure you wouldn’t mind.”
“I’ll bear up.” At least this time he could wait. He’d had one hell of an orgasm less than an hour ago.
“Well, I think I’ll start with your nipples. I was very curious earlier, but I didn’t like to, uh, just.... Well, you know.”
“You think you’re conveying something with this phrase ‘you know.’ But you’re not. Could you mean ‘lick them’?”
She sighed as if relieved. “Yes. Lick them.”
She bent over him and touched her tongue to his right nipple. Sensation shot to his groin. He hadn’t expected that. Not from just a nipple. Not after having spent himself so forcefully less than an hour before. She ran her tongue over it and then sucked gently. He cleared his throat. Now she raked her teeth across it, not biting, but the mere possibility of biting made him feel open and vulnerable to her. She continued working at it, alternating techniques while her other small hand gravitated toward his other nipple and began to tweak it.
She pulled up. “Now, describe how that feels please.”
“Good.”
She frowned at him. “I can’t just say it feels ‘good’ in my books.”
“Well, I’m a man. Men don’t wax flowery over…over things like that.” He took a breath. “That doesn’t mean you have to stop.”
She slipped down and slid her tongue into his navel. “I have other fish to fry right now. I’ll try to get back to them later.” She pulled his thighs apart and he obliged her. “I’ve read,” she said meditatively, “that the area just behind the testicles is very sensitive.” She took two fingers and rubbed the spot in question slowly, deeply. Lord, he was hard as a rock already. Could things get any more intense? “Is that true?” she asked.
“Uh, yes.” Where did she read these kinds of things? In books like hers?
“Pleasurable?”
“That would be yes.”
“And balls, do you like them caressed if I promise to be very gentle?”
“I, uh, I don’t know. No one’s ever done, uh, that exactly to me.”
“You surprise me.” She gave a knowing smile. “A man with your experience?”
The last woman he’d had was the Green Knight’s wife, and that was many years ago. At the thought of the Green Knight and his failure of honor, his heart contracted. He had to put that failure away. This was for Diana. He would perform the act of loving with her, for her, as a healing rite. That was the height of honor. And if it wasn’t, then honor be damned. 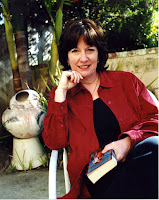 Susan Squires grew up among the giant redwoods of California. She thought she was being practical by changing her major in college from theater to English literature. Immersed in a PhD. Program, she slowly realized that none of her graduating friends had work. So she dropped out after receiving a Master’s degree to take an paying job in the business world.

As an executive in a Fortune 500 company, she returned to her love of writing while continuing to hold her day-job, much to the amusement of her fellow executives. Her novel Danegeld, had already been purchased by Dorchester by the time she accepted a Golden Heart for Best Unpublished Paranormal Manuscript from Romance Writers of America. It was the first of an eclectic group of historical and contemporary paranormal stories known for their intensity. Body Electric was named by Publishers Weekly one of the ten most influential paperbacks of 2002, for blending romance and science-fiction. Book List compared No More Lies to the works of Robin Cook and Michael Crichton, but it was also a Rita finalist for Best Published Paranormal Romance by Romance Writers of America.

Susan’s Companion Series for St. Martin’s Press, continued to garner attention with admiring reviews and several visits to the New York Times Bestseller List. Publishers Weekly named One with the Shadows a Best Book of the Year, and several of the series received starred reviews. Her books have won the many regional contests for published works of paranormal romantic fiction.

Susan no longer has to use tales of romance and adventure to escape budgets and projects. She finally left her day job, and researches and writes her books at the beach in Southern California, supported by three Belgian Sheepdogs and a wonderful husband named Harry who writes occult mysteries as H.R. Knight.

a Rafflecopter giveaway
at November 23, 2016