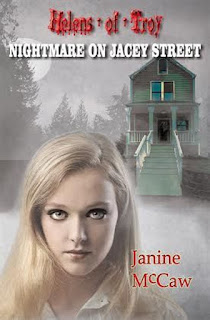 NIGHTMARE ON JACEY STREET, book two in the Helens-of-Troy series, finds matriarch Helena LaRose planning a quiet Thanksgiving dinner with her daughter Helen and granddaughter Ellie. Uninvited guests keep turning up at the door, and when the turkey hits the table, all hell breaks loose

To add to the craziness, body parts are turning up in the neighborhood. Helen gets a new job at the police station with her mother`s ex-lover Chief Roy Cohen and Ellie gets a new job at the Topaz with her frenemy Tara Wildman. Ryan Lachey and Tom Williams uncover secrets from Jacey's Sumner's mysterious past.

Join the Helens and your favorite Trojans as the hellmouth opens once again and the LaRose women are called upon to ward off the latest terror in the sleepy little town of Troy.

NIGHTMARE ON JACEY STREET...because it's never good when the dead are at your door.

Helen LaRose burst through the front door of her mother Helena's home like a banshee on crack cocaine. "It's never good when the dead arrive," she announced, removing her mohair hat with one dramatic swoop of her hand. The static electricity in the dry winter air immediately made her ebony tresses stick out in different directions as if she were permanently attached to a Van de Graaf generator at a science fair.

"What on earth are you going on about?" her mother asked. Being a trained health care professional, she quickly gave her only daughter the once over and deduced that although Helen might be emotionally insane, she was physically fine.

"Love the look," she teased, approaching Helen and yanking one of the fly-away hairs from her head.

"Cut that out," Helen snapped.

"Don't look at me like that. You had 'I am angry' stamped on your forehead before you even came through that door," her mother insisted.

"I told Ellie to put some salt on the front porch steps before she left for school today so the ice would melt. Obviously she forgot," Helen sighed. "I just wiped out on the second step from the bottom. The result of which makes me afraid to tell you the turkey you so desperately wanted for Thanksgiving dinner won't make the cover of Food magazine anytime soon." She paused a moment to wipe some snow from the back of her coat. "But I’m fine, thanks for asking."

Turning to prop the front door open with her foot, she proceeded to drag the bird across the threshold and into the house.

Helena did her best not to smirk.

"Well? Aren’t you going to say anything?" Helen asked, reaching down to show off the item like it were a showpiece on The Price is Right.

"You're right. It looks dead. You know, if you were going to drop the bird on the ground, you could have saved us some bucks and bought a utility grade one," her mother suggested.

Helen rolled her eyes. "I meant," she tried to explain, "aren’t you going to say anything about the size of the stupid bird? I told you we should have picked one up earlier in the week, but oh no, 'wait until the middle of the week when they panic and put them on sale', you said. Thanks for that. This monstrosity was all they had left."

"It does seem a little large," her mother admitted upon closer inspection of the fowl. "You know that it's just the three of us having Thanksgiving dinner together, right?" She could tell the sarcasm in her voice was starting to annoy her daughter.

Helen kicked the still frozen bird in her mother's direction. It took a couple of rolls across the hardwood floor and landed by Helena's slippered feet.

"So, we’ll have leftovers," Helena shrugged. It was her way of letting Helen know she was good with the whole situation. "I sure hope Ellie likes turkey soup."

It had been a few weeks since Helena LaRose’s adult daughter Helen and her teenage granddaughter Ellie had moved into her home, and she was still trying to adapt to the change. A little extra food was the least of her troubles.

"Where is my daughter-of-doom anyway?" Helen asked.

"Goth-Chic said she and Jacey Sumner were going to hang out together after school," Helena replied, finally taking her eyes off their future dinner. She spied a disapproving glance from Helen.

"What? Why are you looking at me like that?" she asked. "I thought we agreed that socializing with the undead was good for her."

"I'm not so sure that hanging around with that blonde bombshell is a good idea for Ellie," Helen cautioned.

Of course Helen was happy that her daughter was making friends so quickly after their sudden move to Troy, but there was something about the tall British girl named Jacey that unnerved her. Helena had said the girl was a "sensitive", and was content to leave it at that, but Helen felt there was something not quite normal about the beautiful girl that had become her daughter's best-friend-forever in a matter of a few short weeks. 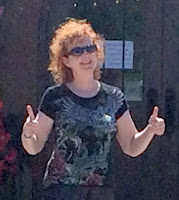 NIGHTMARE on JACEY STREET is the third novel completed by Janine McCaw.  For the Vancouver-based novelist it is the continuation of a dream, and the fruit of years of working in a different creative realm.  McCaw is also currently  working on two additional books: Sisters of Mercy and Pumper.

In high demand as an insightful, humorous and engaging guest speaker, juror and analyst for festivals and trade forums around the country, McCaw also spent large amounts of time traveling abroad to television markets.  Writing relieved the stress of constantly being on the road.  Increasingly, she turned her main hobby into outlines for novels, and finished fleshing out the characters, plot and dialogue for OLIVIA’S MINE, a fictional account of a young bride’s struggle to make a life for herself against the backdrop of the disasters that hit Britannia Beach, British Columbia in the early 1900s.  The book was released in 2006 and continues to be sold at the British Columbia Museum of Mining.

McCaw’s deep understanding of compelling plots, widely appealing characters, natural dialogue and strong story arcs comes directly out of her early career in the film and television industry. McCaw’s skills as an observer started early when her family uprooted from the City to small town Ontario – and she became the classic fish out of water.  Writing down her thoughts became an outlet as she scribbled her way through childhood, while she also developed her observational skills and visual eye with photography.  A die-hard hockey fan, McCaw studied Cinematography at Humber College, and was headed for a career as a cameraperson covering professional sports when she landed an internship in a broadcasting services company.

McCaw excelled in the television distribution arena.  She joined Thomas Howe & Associates and moved with that company to Vancouver, where she distinguished herself with her talent for identifying the right product for the right market, and her people-skills in negotiating contracts. After furthering her professional development with several high-profile Canadian entertainment companies, she parlayed her reputation as a leading Cable Programming specialist into her own boutique firm.  Formed with a partner, Dark Horse Ent. specialized in finding, and selling, niche Canadian television series - entertainment, information and variety - around the Globe.

Free eBook copies of Helens-of-Troy (Book One) via website www.janinemccaw.com