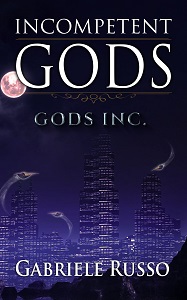 In a dimension created by the ancient gods, most are now stuck working at Gods Incorporated. CEO Queen Louhi Pohjola, a mortal demigoddess turned vampire (on a diet), holds the planet in the palm of her hand and while she cannot by any stretch of the imagination be called a nice person, there’s worse lurking in her shadow.

Goblin, a bitter hybrid with childhood issues and shape-shifting abilities, has a grudge against the world. First on his to-do list is getting rid of the Queen and take her place by forcing the titan Ba’al to devour her.

As her friends and allies fall one-by-one into Goblin’s traps, the Queen’s fate seems inevitable. With no one left to fight, will Ba’al’s friends, a bunch of over-the-hill incompetent gods, be enough to stop Goblin from turning the world into hell?

About the Author:
Gabriele Russo, AKA Lucie-Gabrielle Jolicoeur-Rousseau, was born in Quebec City amidst a family of book lovers – her father had dreamed of being a writer and both of her brothers are published authors.

Since she earned her Bachelor’s in History, it was no surprise (except to her) that she ended up working in restaurants, eventually owning two, which almost drove her mad. She sold them and was nursed back to pseudo-sanity by Douglas Adams and Terry Pratchett.

That’s when she answered the family calling and decided to write. Armed with her ideas for the Gods Inc. series she went back to the University and got her Master’s in Creative Writing.

She now lives with her husband in Culpeper, Virginia, where she divides her time between painting, ripping apart and reconstructing her recently bought historical home, playing tennis and, of course, writing more books.