My Ten Favorite Excerpts from Twisted
In chronological order

“When I saw you grip that ax I knew…”
The room fell silent. Aoife leaned forward.
“You knew what?”
“I knew that if someone had to kill him, I didn’t want it to be you. I need to know that there is one person in this world who is pure and unsullied.”

She gently took hold of his hood and lifted it off his head. He turned and hid his face from her. The murky eyes and the sagging flesh looked as ghoulish as she remembered, yet less frightening without the element of surprise. She cupped her right hand under his chin and gently turned his face toward her, noting that he was less than a head shorter than she was. He obeyed, but curled his lip. She held his gaze steady. His growl was like a wounded animal, fighting the hand trying to offer healing. She cupped his face with both hands. She felt the thick folds of his flesh and the uneven stubble of hair. His gnarled lips looked more like a protective shield than a threat. And his eyes. Their hazy film and the heavy fog upon them seemed like a painful curse of birth, not a reflection of his soul.

Without warning he swung his cape over her body and a current of air blew over her with the force of a March wind, but the temperature of a summer breeze. Darkness shrouded her for a moment before the sparkle of the stars burst forth in the sky all around her. She was riding the night wind high in the atmosphere, the world below her far away, her drama a mere speck on the map. Her arms stretched out wide like the wings of a bird and she felt his arms extended below them, buoying them up and guiding her flight. Her heart and her arms opened wide to the universe with an unparalleled sense of freedom. Up she flew, faster than any creature on earth, until she thought her heart would burst and then down they dove until they reached the edge of the forest.

He put one hand out with his palm facing upwards like an offering. Closing his eyes he laid his other palm on top and began to move it in slow circles. His hands began to circle faster until a spark of light caught like a candle. As its glow spread and grew into a bright golden light, his hands separated and in a flash of light there stood a brilliant, sapphire colored stone. The room was filled with a momentary burst of light and then the magic of the moment collapsed inward into the stone in his hand.

The opalescent pearls and the sparkling emerald that hung around the woman’s throat housed more life than her empty eyes and mouth. Her cool, ivory skin looked as frozen and immovable as marble. Aoife thought she looked like a drowned mermaid ripped from the water’s current and propped up like a fisherman’s trophy. She stood with arms outstretched on her pedestal for all to admire and gaze upon, the lifelessness of her body an irrelevant and inconsequential footnote.

How similar was the training of wives and whores.

I don’t want to give any more, because I’d like to leave some surprises for my readers! 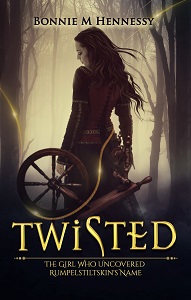 An old tale tells the story of how a little man named Rumpelstiltskin spun straw into gold and tricked a desperate girl into trading away her baby. But that’s not exactly how it happened.

The real story began with a drunken father who kept throwing money away on alcohol and women, while his daughter, Aoife, ran the family farm on her own. When he gambled away everything they owned to the Duke, it was up to her to spin straw into gold to win it all back.

With her wits and the help of a magical guardian, she outsmarted the Duke and saved the day.

Her guardian suddenly turned on Aoife and sent her on a quest to find his name, the clues to which were hidden deep in the woods, a moldy dungeon, and a dead woman’s chamber.

This is not the tale of a damsel in distress, but a tenacious, young woman who solved a mystery so great that not even the enchanted man who spun straw into gold could figure it out.

Not until Aoife came along.

Bonnie grew up a shy, quiet girl who the teachers always seated next to the noisy boys because they knew she was too afraid to talk to anyone. She always had a lot she wanted to say but was too afraid to share it for fear she might die of embarrassment if people actually noticed her. Somewhere along the line, perhaps after she surprised her eighth grade class by standing up to a teacher who was belittling a fellow student, she realized that she had a voice and she didn’t burst into flames when her classmates stared at her in surprise.

Not long after that, she began spinning tales, some of which got her into trouble with her mom. Whether persuading her father to take her to the candy store as a little girl or convincing her parents to let her move from Los Angeles to Manhattan to pursue a career at eighteen as a ballet dancer with only $200 in her pocket, Bonnie has proven that she knows how to tell a compelling story.

Now she spends her time reading and making up stories for her two children at night. By day she is an English teacher who never puts the quiet girls next to the noisy boys and works hard to persuade her students that stories, whether they are the ones she teaches in class or the ones she tells to keep them from daydreaming, are better escapes than computers, phones, and social media.