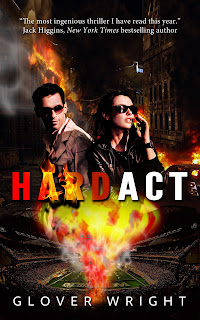 Only the CIA knows the truth, and all it would take for the president’s legacy to be tarnished forever is for one agent involved to turn rogue and reveal everything . . .
​
In 2011, American Seal Team Six killed Osama bin Laden in an ultra-secret CIA operation hailed as the outgoing US president’s crowning achievement. Pakistan's chief investigator into US Operation Neptune Spear concluded Bin Laden was betrayed by Al Qaeda itself, fooling the CIA and gaining the US president’s bounty on their ailing leader’s head: $25,000,000, which may have given birth to deadly ISIS.
Loner, Agent Ben Markstein, betrayed and primed for retribution by his obsession with the Pakistani beauty at the dark heart of HARD ACT, an unsanctioned covert black operation planned by former US Senator Wendell Strachan to save the president and regain the $25,000,000 held in a Liechtenstein bank account by Saudi Prince Faisal bin Sharif, CEO of a billion-dollar Islamic charity trust and secret terrorist money-launderer.
Markstein learns that Serena Lashari, the beautiful, clever, successful Geneva-based fund-manager is Prince Faisal’s lover and has the account codes. He acts ruthlessly, manipulating Wendell Strachan and the black operation to win Serena and the money for himself.
​
Against a background of political conspiracy and escalating violence across Europe, culminating in potential catastrophe at a nuclear-armed U.S.A.F air-base in England, Ben Markstein plays HARD ACT’s ruthless game to win – even at the cost of the lives of all who stand in his way.

About the Author:
Glover Wright has a background in entertainment. He was lead-guitarist in the 1960’s for American Rock Legends Jerry Lee Lewis and Gene Vincent on their British tours, recorded as Buddy Britten & the Regents, was with the Beatles in their early Hamburg days and, through his friendship with John Lennon, became composer and producer with The Beatles Apple Music. After the Beatles split, he signed with Mercury records USA, had success as Simon Raverne and toured widely entertaining US troops, an experience he remembers with pride.
With writing in mind, he broke from music in the 1970’s and spent time with contract soldiers and British SAS units in Oman, resulting in his debut novel The Torch, which was accepted immediately by Putnam USA and published worldwide including many translations. During his extended period in the Middle East he met many figures later to shape world events, including Libya’s Moammar al-Gaddafi and in Beirut’s celebrity-haunt nightclub Le Cave de Roy was invited ­– after being recognized and asked to perform a song on stage – to join the table hosted by a wealthy young Saudi Arab named Osama Bin Laden.
Glover Wright has had eight novels published to date and lives now in Jersey, British Channel Islands. He still performs musically at charity fund-raisers for servicemen and women wounded in action and is proud to do so.
HARD ACT is his most hard-hitting and timely thriller to date. World best-selling writer Jack Higgins describes it as: “The most ingenious thriller I have read this year.”

1. Do you plan everything or just let the story flow?
I plan my ending first and work everything toward that final denouement.
2. Do your characters ever want to take over the story?
In a sense the characters control the story because of their actions within the plot. To control the plot the writer has to control the characters actions – which is fine, except characters develop even as you write asserting a will of their own simply by the abilities you give them as things move on. This is where a really good editor can make all the difference to a completed work. In Vicki McGough I had one of the best out there. Incidentally, I should point out that my lead character, Ben Markstein, the rogue CIA agent in HARD ACT actually did not exist. It was my literary agent Linda Langton who told me that the shadowy background figure who was creating all the havoc internationally had to be seen. A full rewrite had to be done – hateful job but necessary – and, all thanks to Linda, it worked a dream.
3. What is your favourite food?
Hard to say. Sometimes Italian, often French (escargaux in particular followed by a bleu filet mignon) – though I’m a sucker for a really good American burger with all the trimmings: can’t beat that!
4. Are you a morning person or a night owl?
I used to be strictly a night-owl but these days I’m up early or I’d never complete a book.
5. Where do you dream of travelling to and why?
Anywhere where the sea is warm, turquoise in colour, with some decent waves, the sand soft and white with a few palm trees for shade while sipping long cold cocktails.
6. Do distant places feature in your books?
Yes, often.
7.Do you listen to music while writing?
When I first started writing, yes: classical – something ordered and precise (Mozart) where it fitted and more dramatic (Wagner) for the big denouement … but now I work in silence and leave music (all kinds) for relaxation.

8. Could you tell us a bit about your latest release?
My first review described it as: “A searing, uncompromising and thoroughly modern thriller set against a background of extremeist Islamic terrorism”, which hits the spot. It is also the story of Serena Lashari, a clever, stunningly beautiful woman in extremis, finding herself alone, her billionaire Arab lover with deep secrets killed, her son kidnapped left with only her courage to get her through the coming horror she faces, having no choice now all hope of raising the $10,000,000 huge ransom demanded by her son’s abductors is gone but to use all means available: her sharp mind, her sexuality and her lovers deadly secrets - secrets hunted by America and Israel, and protected, at any cost, by the rising Islamic State. At the heart of the book, beating throughout as black operation HARD ACT, lies the question asked by conspiracy thoerists to this day: who was paid the $25,000,000 bounty offered by the US president for the capture or death of Osama bin Laden?

9. What have you learned about writing and publishing since you first started?
Never give up. Never, ever, doubt yourself

10. Is there anything you would do differently?
No.
11. Who, or what, if anything has influenced your writing?
Particular books rather than writers influenced my development as a writer.
12. Anything you would say to those just starting out in the craft?
Believe in yourself and persevere – and be prepared but not defeated by disapointments which will come. The solution is always – but always – to move on … find that someone out there who can see you’ve got what it takes even though it many need drawing out. Never give up!

13. What are three words that describe you?
Self-belief, tenacious, and - I hope - kind.

14. What's your favourite book or who is your favourite writer?
I have to name the novel “The Last Place God Made” by Jack Higgins. Buying that book changed my life entirely – but that’s a long story!
15. List of previous books if any
The Torch, Whitefire, Blood Enemies, The Hound of Heaven, Eighth Day, Shadow of Babel, Headhunter, Aurora.