Like your romances spicy? Don’t miss the Naughty Nobles trilogy….
By Kelli A. Wilkins
www.KelliWilkins.com 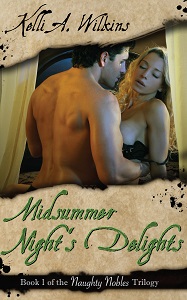 Midsummer Night’s Delights introduces readers to Julian and Annabelle. They are strangers trapped in an arranged, sexless marriage. To loosen them up, Julian’s father sends them to the Marquis of Demby’s estate to attend a Midsummer Ball. (And this type of ball isn’t for dancing!)
Julian and Annabelle meet the marquis, Vincent, and his wife, Sabrina. Over the course of their visit, they learn how to open up and explore their sexuality. When they attend the Midsummer Ball, they shed their inhibitions while indulging in their wildest fantasies. Anything goes in this erotic tale, and I had a lot of fun showing how Annabelle and Julian loosen up and embrace their wanton sides.

When I wrote Midsummer, I had no idea I would turn the book into a trilogy. Readers and reviewers loved the story and the characters so much, that they wanted these very naughty adventures to continue. So, I wrote two sequels, Midwinter Night’s Delights and Ultimate Night’s Delights. Although the stories are connected, each novella stands alone as an individual read.
The second book in the series, Midwinter Night’s Delights, picks up six months after the last story and follows the continuing sexual adventures of Annabelle and Julian. (And yes, this novella is just as hot—if not hotter—than the first one!)
In the sequel, we discover that Annabelle and Julian have taken what they’ve learned and gone wild. Ever since the Midsummer Ball, they have been overindulging in all sorts of lewd activities. Instead of being shy and repressed, they are more than eager to give in to their desires whenever (and wherever) the mood strikes—even if it’s at a formal dinner party. Needless to say, Julian’s father sends them back to Vincent’s estate to be disciplined and learn self-control.

Ultimate Night’s Delights is the third and final novella in the series. When I started thinking about the plot, I wasn’t sure what direction to take. I knew there had to be something interesting (beyond a naughty “anything goes” ball) that raised the stakes for everyone, and I thought about blackmail. (It’s always a good motive!)

From there, I developed the idea of the “Black Duke” and his mission to destroy Vincent. Then of course, I had to devise a clever way to tie it all together at the end. I also enhanced a storyline and shared some insight on two secondary characters, Lono and Lobo. (Readers were briefly introduced to them in the second book.) In this story, I explain how they came to be employed by Vincent and Sabrina and what’s ahead for them in the future.

Here are the summaries and links to each book:

Bonus! This e-book includes a sneak peek at the second book in the Naughty Nobles trilogy: Midwinter Night’s Delights.

Midwinter Night’s Delights
Julian and Annabelle are back for another naughty ball!

The Marquis of Demby’s Midsummer Ball transformed Julian and Annabelle forever. No longer shy about satisfying their sexual urges, the young newlyweds give in to their wanton desires whenever—and wherever—the mood strikes. Anything goes in their open marriage, and they’re not ashamed to share their passions with others.

Bonus! This e-book includes a sneak peek at the third book in the Naughty Nobles trilogy: Ultimate Night’s Delights.

Ultimate Night’s Delights
Julian and Annabelle are back for the final ball!

But life on Vincent and Sabrina’s estate is anything but tranquil. The notorious Duke of Blackwell has discovered the secret about the naughty balls and is out to destroy the marquis.

Vincent refuses to deny the rumors about the “anything goes” parties he hosts, and turns to his friends for assistance. Together, they devise a plan to defeat the Black Duke… and still find time for a few wicked games.

Here’s a Tame Excerpt from Midsummer Night’s Delights:
Julian followed Vincent down the carpeted corridor, lost in thought. Vincent’s crude words and lewd behavior in the garden had shocked him. Yet, he was intrigued by his claim to be able to “cure” him and awaken his passion. But the idea of attending a ball where everyone would screw, terrified him. What would Annabelle say when she learned of this? How could he ever bring up the subject with her?
“Let’s go in here,” Vincent said, stepping into a room.
“Whose bedroom is this?” he asked as Vincent gestured for him to enter. Like his own bedchamber, the room was elaborately decorated and had an enormous four-poster bed along one wall.
“Shh, keep your voice down.” Vincent removed a painting of a castle from the far wall. He tossed the canvas on the bed and gestured for him to come closer.
He was about to speak when he heard a woman moan.
“Oh, yes… Go deeper,” she said.
His skin prickled. Was a woman having intimate relations in the next room?
Vincent had his face pressed against the wall and was watching from a hole cut into the plaster. Had he no shame? Did he spy on all his guests in their private moments?
He crossed the room, curious, yet offended. “You shouldn’t watch—”
“Shh. Don’t be a prude. Take a look for yourself,” Vincent replied, moving aside so he could look.
He peered through the small hole and saw a brightly-lit bedchamber. A naked, dark-haired woman was kneeling over another figure on the bed. After watching for another minute, he pulled away and frowned at Vincent. “It’s not right to peek in on people. That could be someone’s wife.”
“It is. Mine. That’s Sabrina.”
His heart skipped a beat. “Don’t you care that your wife is in there with another man?”
Vincent shook his head. “She’s not. She’s in there with a woman. Annabelle.”
“What?” He pressed his eye to the peephole again. Sabrina had moved on the bed and now lay on her side, her hand moving between another woman’s parted legs. He scowled. That couldn’t be Annabelle.
Julian readjusted his position to get a better view. He heard a giggle, then saw a flash of light brown hair. A second later, Annabelle leaned forward and kissed Sabrina on the mouth. His mind reeled as he stared at the two women.
His mouth went dry and he turned away from the wall. “Are they…”
“Screwing? Yes. And from the sound of it, they’re enjoying themselves.” Vincent pulled the flask from his pocket and opened it. “You look like you need another drink.”
Julian took the flask and drank down the rest of the liquor. How could his innocent Annabelle be naked? Frolicking with another woman? Dear God, she was his wife and he’d never seen her completely naked himself.
“How… how did this happen?” he croaked out.
“It seems your delicate, repressed wife has learned to release her pent-up desires… with a bit of help, of course.” Vincent grinned as Annabelle whimpered in delight.
“But how? They’re women, and—”
“Take a look,” Vincent said. “You might learn something.”
* * *
I hope you’ll check out the trilogy and let me know what you think. Which book is your favorite? Do you wish the series would continue? I enjoy hearing from readers and other authors, so drop me a line with questions or comments.
Be sure to follow my blog for the latest updates and visit me on social media.
Happy Reading,
Kelli A. Wilkins