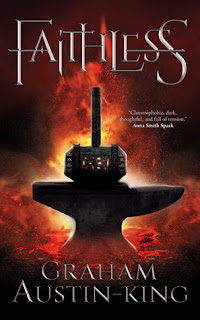 The temples of the Forgefather have fallen. The clerics and defenders that could once be found across the nine lands are no more. Priests huddle in the great temple, clinging to the echoes of their lost religion. But the Father has fallen silent. There are none who still hear his voice.

The mines of Aspiration lie far below the temple's marble halls. Slaves toil in the blackness, striving to earn their way into the church and the light. Wynn has been sold into this fate, traded for a handful of silver. In the depths of the mines, where none dare carry flame, he must meet his tally or die. But there are things that lurk in that darkness, and still darker things within the hearts of men.

When the souls bound to the great forge are released in a failed ritual, one novice flees down into the darkness of the mines. The soulwraiths know only hunger, the risen know only hate. In the blackest depths Kharios must seek a light to combat the darkness which descends.


I've been seeing this book around on my Goodreads Feeds and Amazon Also-boughts recently and decided it was worth taking a chance on. I read so much fantasy that some of it seems very similar in plot and themes, but all done differently with different characters and a different author's voice. Faithless is one of the most unique and original fantasy books I have ever read.

Wynn is sold to the temple by his father, after their farm is in dire straits after much drought. He thinks he's to become a novice of the priests there, but instead he is sent to the mines far below the temple itself. As well as priests, the temple needs the coal and the ore to do their religious smithing and there are thousands of slaves toiling below the temple in the mines.

Danger lurks around every corner; cave-ins, people from other crews who might steal your tally if they sense even an ounce of weakness. Sometimes the lucky ones do get called to serve in the temple above, but only a few and the rest live and die in the darkness below.

Kharios is a novice of the Forgefather, the god of the temple. Their faith is based around metal and smithing, one I have never seen in a fantasy book before. It's fascinating and intriguing in equal measures.

Aspirant, the underground city, seemed very in tune with what a mining town would be like. You need equipment, you have to pay a tally for it. Everything costs, nothing is free, not even the chemlamps the miner's need for safety.

The author caught the sense of a mine really well. I've been down a few and they do feel claustrophobic and as if something is watching you from the darkness. The world building was fantastic and you really got a feel for this society and the characters within it.

Just a head's up that there are some scenes of sexual assault/abuse by one of the priests who preys on the younger novices. I don't think it was done for shock value and the author handled it very sensitively, but it is there even if mostly off-screen.

The pacing is just about right. The author gives you enough explanation/description, but is not overly bogged down with it so that the plot keeps going and isn't stuck at a standstill while you get twenty pages describing an anvil. The author doesn't do that. Wynn is almost a stand-in for the reader, as he doesn't know a lot about the religion and while he gets instruction, the reader does too without the knowledge seeming forced.

Great characterisation, the prose flowed well and all in all an excellent story that reels you in and keeps you there. If you're looking for an original fantasy novel, you won't go far wrong with this one.