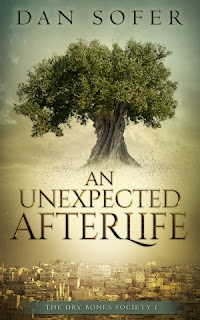 YOU ONLY LIVE TWICE?

When he wakes up naked and alone in the Mount of Olives Cemetery,  Moshe Karlin doesn't remember dying two years ago, nor does he realize how hard he'll have to work to win back his perfect old life... and his wife. In fact, he'll be lucky to survive his first week on the streets of  Jerusalem.

Meanwhile, other changes are afoot in the Holy Land. A reluctant prophet prepares to deliver a message of  edemption–and the end of life as we know it–when a freak accident changes the course of history.

Moshe Karlin emerged from a deep and dreamless sleep with a premonition of impending doom. The world seemed out of place. The dawn chorus of summer birds filled his ears, but louder than usual, as though an entire flock had perched on the windowsill above his bed. The mattress pressed against his back, hard and coarse. A chill breeze tickled the hair on his bare chest.

His eyelids snapped open. The endless blue velvet canopy of heaven stretched overhead, and as he gazed, a star winked out. His heart thumped in his rib cage. He was not in his bed. Or his bedroom. Or even his house.

He craned his neck forward. He lay on his back in a stony field, as naked as the day he was born.

His head slumped to the ground.

Moshe Karlin, you are in deep trouble.

Galit would kill him when he got home. That is, if she ever found out.

Moshe heard the East Jerusalem muezzin most mornings but always from a safe distance. This morning, however, the blaring call to morning prayers seemed to issue from only a stone’s throw away.

Correction. You are in very deep trouble.

He rolled onto his side and scrambled to his feet, covering his privates with his hands. The field was perched on a hilltop. In the valley below, streetlights still burned and the Dome of the Rock glowed golden behind the ancient walls of Jerusalem’s Old City.

A low rock wall snaked along the edge of the field and around the gnarled trunk of a large olive tree. Above the wall, rows of rounded headstones poked at the sky like accusatory fingers.

Moshe knew the cemetery well. His parents’ twin graves lay a short walk away. He hadn’t visited them lately but he was in no state to do so now.

How in God’s name had he spent the night—naked—in the Mount of Olives Cemetery?

A ball of searing pain burst behind his right eyeball. He fell to one knee and released a hand from modesty duty to massage his temple.

Of course! His birthday party last night. He had sipped a glass of Recanati Merlot as he discussed his business plans with Galit’s grandmother. He had looked about for Galit and then… a black interplanetary void. He had never drunk to blackout before, not even in his single days, but that would explain the headache. It might also help explain his current predicament.

He glanced at his wrist and swore under his breath. His watch—his dear father’s Rolex, the heirloom from his grandfather—was gone. Moshe took it off only to shower. One person alone would dare take his watch. One person alone would abandon him overnight and buck naked in an East Jerusalem graveyard. Moshe would deal with him later. For now, he had to get home.

He hobbled in the twilight toward the access road—rough and lacking shoulders—that bordered the field. Sharp stones bit into the tender soles of his feet. The headache spread to his left eye and throbbed with his every step.

With luck, he’d avoid early-bird terrorists. With more luck, he’d slip under the covers before Galit got up to dress Talya for kindergarten.

He quickened his pace. A truck whooshed along a hidden street far below. Thankfully, the access road had no streetlights. As the road fell, walls of stone rose on either side.

Through a breach in the wall, he spied a yard with a clothesline. He reached through the hole and, with some effort, snagged the edge of a bedsheet. After brushing dirt and leaves from his goosefleshed body, he fashioned the sheet into a crude toga. His new attire would still draw stares but the sheet was dry and covered the important bits. He lacked only a laurel wreath to complete his Roman emperor costume. Pity it wasn’t Purim today. He would have blended right in.

The road meandered around stone houses with dark windows and emptied into a two-lane thoroughfare. Sidewalks. Streetlamps. Civilization. He flagged down a white taxi and climbed into the back seat.

The driver, a young Israeli in a leather jacket, started the meter, and the car pulled off.

Moshe inhaled the sweet scent of new leather. He had worked with taxis all his life but he had not hired one in years. The upholstery felt soft and smooth through the thin sheet.

Eyes watched him in the rearview mirror and they crinkled at the edges. “Wild party, huh?”

Details of the previous night surfaced in Moshe’s bruised brain. “My fortieth birthday,” he said. “My wife threw a party at the Botanical Gardens.”

He regretted the words the moment they left his mouth. Karlin & Son ran the largest taxi dispatch service in Jerusalem and he did not need this story circulating among the city’s cabbies.

The driver, however, did not seem to recognize his voice. Newbie. Of course—who else drew the graveyard shift?

The eyes in the mirror narrowed. “Botanical Gardens?” he said. “That’s the other side of town.”

Newbie or not, he knew the lay of the land. The Italian restaurant at the Botanical Gardens overlooked a large pond in western Jerusalem. Moshe had sipped his merlot and told Savta Sarah of his plans to extend Karlin & Son from Jerusalem to Tel Aviv. They already controlled the shuttle routes to Ben Gurion Airport. He had looked around for Galit. He had wanted to raise a toast in her honor. They had hardly spoken with each other all day and, with his recent work schedule, they had spent little quality time together. He had wanted to tell her how much she meant to him. Where was she? And then… another gaping abyss in his memory.

“My friend.” The word “friend” dripped with sarcasm. “He’s always trying to drag me to nightclubs like the old days. Last night, I guess he succeeded.”

Moshe massaged his temples with his fingers. He needed an Acamol.

The driver laughed. “With a friend like that, who needs enemies, right?”