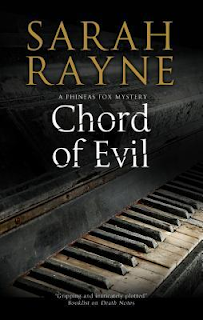 A mysterious 1940s' portrait leads researcher Phineas Fox to uncover a devastating wartime secret in this chilling novel of suspense.

Phineas Fox finds it impossible to refuse when his sport-loving neighbour Toby begs for his help in finding out what's happened to his cousin Arabella, who seems to have disappeared without trace. The only clue to her whereabouts is an obscure 1940s' portrait left in her flat, a gift from her godfather, Stefan.

The painting depicts the mysterious Christa Klein, Stefan's sister - and an alleged murderess. Was Christa Klein really guilty of a monstrous crime? What exactly happened within brooding Wewelsburg Castle back in 1941? And what does it have to do with Arabella's disappearance?

As Phin delves further, he uncovers evidence of a lost piece of music and a devastating wartime secret: an atrocity whose repercussions reach to the present day.

This is the second adventure for music historian and researcher Phineas Fox. You don't need to read the first one to be able to enjoy this one as it is a self-contained mystery, but the first one would give more insight into the characters. And it's an excellent read too, so why not?

Like most of Sarah Rayne's books, we get different interwoven tales, some in the present, some in the far past and some in the not so distant past that all flow together like a tapestry with words instead of threads.

Phin's neighbour, Toby, enlists his help when his cousin Arabella vanishes without trace. The mystery of it catches Phin's imagination, even more so when their only clue is an old picture depicting Christa Klein, an alleged murderess. But it's what she has in her hand that has Phin intrigued: sheets of handwritten music, some of which contain a tritone, what's known as the devil's chord.

The storyline passes from present to past and back again effortlessly as the reader is taken on a journey to discover what really happened all those years ago. Things that still have echoes in the present.

A gripping plot, intriguing characters and a mystery that will keep even the most avid crime reader happy. Lots of twists and turn that keep you guessing.

Toby is the perfect foil to Phin's rather endearing scattiness sometimes, as Toby is more grounded and down to earth. The music is almost like a character in itself, which I loved.

Some of the book his chilling regarding those dark days in Germany, because unlike a horror book, some of those atrocities actually happened. But they are not there to shock, and most is hinted at, rather than on the page.

It was so well-written and the pages flew by so fast. Ms. Rayne has a way with words that seems almost poetic at times. I stayed up trying to finish it because I wanted to know what happened next, but by 80% I just couldn't keep my eyes open any more. I finished the rest this morning, eager to find out what happens next.

A wonderful book and one I would re-read again in a heartbeat.