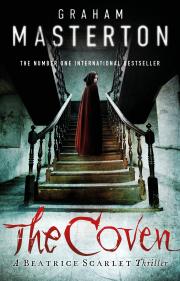 They say the girls were witches, but Beatrice Scarlet, the apothecary's daughter, knows they were victims...

Beatrice Scarlet has returned to London and found work at St Mary Magdalene's Refuge for fallen women. Beatrice enjoys the work and her apothecary skills are much needed. The home cooperates with a network of wealthy factory owners across London, finding their charges steady work and hopes of rehabilitation.

But when twelve girls sent to a factory in Clerkenwell disappear, Beatrice is uneasy. Their would-be benefactor claims they were witches, sacrificed by Satan for his demonic misdeeds. But Beatrice is sure something much darker than witchcraft is at play...


I have read quite a few Graham Masterton books in my time, mostly the horror titles and a few of his detective series set in Ireland. This was the first time I have read any historicals by this author and I was glad I took a chance on it.

This is the second Beatrice Scarlet book, but even if you haven't read the first one, this one is easy to follow and things that happened in the past were referenced in the back story so you don't get too lost.

Beatrice has to return to London after the death of her husband, a parson who had died in New Hampshire and the church there wanted their house for the new parson and his wife, so Beatrice and he daughter are left homeless. Her young son, Noah has disappeared too, suspected to have been abducted by Indians Beatrice.

Alone and grief-stricken agrees to help out in a London refuge for fallen women. Beatrice is expected to help the former prostitutes reform of their previous life by helping to teach them to read, to sew, to cook and anything else Mrs Smollett asks of her. As daughter to an apothecary, Beatrice too knows a lot of medicines and treatments and soon all the girls in the house are much healthier and happier because of her.

But when girls from the refuge get taken on for work at a local tobacco factory, run by Mr. George Hazzard, one of the main benefactors of the home, the girls keep disappearing.

Accusations of witchcraft abound, that the girls have conjured up the devil and he helped them escape. Escape from what though? Beatrice is convinced that it is something more man-made at play rather than witchcraft, but by voicing that opinion, it puts her and her daughter in danger too. There are more suspects than you can shake a stick at, but it does keep you guessing.

The writing took a little bit of getting into, to find the right rhythm, as it is quit old-fashioned and uses a lot of words that would have been used at the time, but we might not have heard of today. But I do love learning new words that I've never heard before.

The story itself and the pacing is good and I loved Beatrice. She reminded me a bit of a female Sherlock Holmes. It was rather unusual for a women then to be so learned as her, and other characters do reference this and think she is unusual. Quite a few of the supporting characters come across as very moral, judgemental and holier than thou, but that was probably how a lot of people thought in those days.

I don't know how accurate the history is in this book, but it seemed to suit the story and nothing jarred me as being incongruous with the time. The only jarring note is in relation to Beatrice's toddler daughter, Florence. She seemed very advanced for her age.

Despite the title, the book is not really about witchcraft or things of that ilk. But if you like historicals with a bit of mystery, then give it a go.

The plot grabs you and doesn't let go until the last page and I would certainly like to read more of Beatrice's adventures in crime-solving.