Today, we have in the hot seat, author Sherrie Cronin. All pictures supplied by author.

Sherrie Roth grew up in Western Kansas thinking that there was no place in the universe more fascinating than outer space.  After her mother vetoed astronaut as a career ambition, she went on to study journalism and physics in hopes of becoming a science writer.

She published her first and only science fiction short story in the November 1979 issue of Isaac Asimov's Science Fiction Magazine and waited a lot of tables while she looked for inspiration for the next story. When it finally came, it declared to her that it had to be whole book, nothing less. One night, while digesting this disturbing piece of news, she drank way too many shots of ouzo with her boyfriend.  She woke up thirty-one years later demanding to know what was going on.

The boyfriend, who she had apparently long since married, asked her to please calm down. He explained that in a fit of practicality she had gone back to school and gotten a degree in geophysics and had spent the last 28 years interpreting seismic data in the oil industry. The good news, according to Mr. Cronin, was that she had found it at least mildly entertaining and ridiculously well paying.  The bad news was that the two of them had still managed to spend almost all of the money.

Apparently, she was now Mrs. Cronin, and the further good news was that they had produced three wonderful children whom they loved dearly, even though to be honest that is where a lot of the money had gone.  Even better news was that Mr. Cronin turned out to be a warm-hearted sort who was happy to see her awake and ready to write.  "It's about time," were his exact words.

Sherrie Cronin discovered that over the ensuing decades Sally Ride had already managed to become the first woman in space and apparently had done a fine job of it.  No one, however, had written the book that had been in Sherrie's head for decades.  The only problem was, the book informed her sternly that it had now grown into a six book series. Sherrie decided that she better start writing it before it got any longer. She has been wide awake ever since, and writing away.

A little of both.  I am on my third book now and each time I have had a clear sense of the beginning and the end, but exactly how I get to the end is more a matter of letting it flow.

All three books have had one minor character that insisted on having a bigger part.  In each case I kind of fought it at first and finally relented, and in each case I'm glad I did.

very much a night owl

everywhere  -- I hope to make it to every single one of the 193 (or what every the number becomes) sovereign nations on earth before I die.

Yes very much so.  Half of the first book takes place in Nigeria. This is challenging because I've never been there, but I have worked closely with many Nigerians for years and some were very helpful giving me information. A lot of the second book takes place in the South Pacific.

No. But each of my books has a sort of soundtrack to it that reflects the musical tastes of the main character. When the character sings a song in his or her head, the reader can click a link and hear the song also, at least if they are using an electronic reader that can access the internet..

My second book, y1, will be out by the end of the summer. It's a hybrid between speculative fiction and a crime novel, involving a young shape shifter who has to solve a murder to clear his friend's name. He is the son of the main character in my first book.

I've learned to be much more thick skinned. I used to be very shy about my writing.

At first I thought my cheif motivation was just to write.  To create.  I was surprised after I finished the first book and published it online how badly I also wanted to be read. I think it might have been helpful to have started out with more of that end in mind.

This will sound funny, but using online search engines has. Not only has it had the practical influence of putting tons of information at my fingertips, but I think all three books so far sort of have that feel of a world of knowledge just peeking around the pages.

Doing just a little bit a so much better than doing nothing at all.

y1 (available online September 2012) tells of the adventures of twenty-four year old Zane Zeitman as he comes to terms with his first real job at Penthes Pharmaceuticals and with all the secrets he finds hidden behind the company’s calm corporate facade.  Of course, it is hard to concentrate on work what with all the fire dancing and yachts sailing around the South Pacific, not to mention the odd shape changing that Zane’s own body seems to do more easily all the time. And just when he thought real life couldn’t get any stranger,  there is the additional problem of becoming a murder suspect… 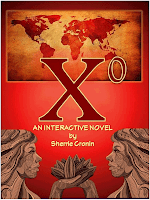 x0 (online since February 20, 2012): x0 is an ancient organization that prefers to stay hidden. Yet, when a young Nigerian seeking her captive sister draws upon her telepathic powers to forge a link with an unwilling Texan geophysicist, x0 reconsiders. The two women are both far more powerful than they realize, and the sister has become a strategic pawn in a conspiracy that threatens to alter the course of a nation.

Thank you, Sherrie. Good luck with your books :)