Today we have an interview with author John. A. Heldt to celebrate the release of his debut book, The Mine.

John A. Heldt is a reference librarian who lives and works in Montana. The former award-winning sportswriter and newspaper editor has loved reading and writing since writing book reports on baseball heroes in grade school. A graduate of both the University of Oregon and University of Iowa, he is an avid fisherman, sports fan, home brewer, and reader of thrillers and historical fiction. The Mine is his first novel.

I do both. I sketch out chapter summaries in advance and try to stick to them. But often I will depart from the script and allow the story to flow in an unexpected direction. I love it when that happens because I believe that kind of spontaneity is at the heart of good fiction.

No. I don't give them that much latitude ;-)

Tahiti. I know it's hardly an original choice, but the place is probably as close to heaven on earth as you can get.

Yes and no. The Mine and my upcoming novel, The Journey, are firmly rooted in America's Pacific Northwest. But I make frequent references to distance places in The Mine -- places like central Africa, the Philippines, and China. One of the book's primary characters, Grace Vandenberg, grew up in these venues in the 1920s and 1930s as the daughter of missionaries.

Yes. I have developed several playlists for each of my books, featuring period appropriate music. It helps me get into the right frame of mind. 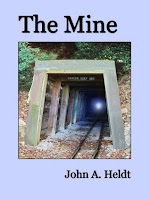 My debut novel, The Mine, has something for everyone: humor, history, adventure, romance, science fiction, and serious themes. It is the story of Joel Smith, a handsome, charismatic, cavalier college senior who road trips to Yellowstone National Park in May 2000, enters an abandoned mine on a lark, and emerges from that mine in May 1941. With little but his wits to guide his way, he returns to his hometown of Seattle and starts a new life within a tight circle of friends that includes his progressive 21-year-old grandmother and a beautiful, recently-engaged honors student named Grace Vandenberg. Joel possesses encyclopedic knowledge of the past and struggles with how to apply it. He knows Pearl Harbor will affect his friends in tragic, irrevocable ways. But he knows he is an interloper in another time and vows to limit his impact on the fate of others, a goal that becomes problematic when he falls in love with Grace. The Mine is a book that entertains, but it is also one that prompts readers to think and ask the big questions.

It is difficult to let go of a story. You write it, rework it, and eventually publish it. But the characters are never out of your head.

I would pay more attention to marketing. It's one thing to write a good story. It's another to sell it to strangers with different reading tastes, biases, and, life experiences.

Many books, movies, and life experiences. The challenge for any writer is to put his or her unique stamp on things most of us have experienced.

Don't put off any project. Jump in. Listen to those who've succeeded and to those who've failed. You can learn from both. But in the end, write the story you want to write. Don't let the critic overrule the artist.

I have several favorite books and writers and have always found it hard to narrow them down to one. But I have never been disappointed by Vince Flynn, Nelson DeMille, and Ken Follett.

My second novel, The Journey, is about a 48-year-old widow who returns to the time and place of her senior year in high school. She befriends her younger self and nudges the girl and her childhood friends in more positive directions against a backdrop of historical events over which she has little control. The Journey is unrelated to The Mine, though two characters from my first book make a cameo appearance in the second.

Thank you, John and good luck with your books :)

You can read an extract from The Mine on the book spotlight here
http://booksandtales.blogspot.co.uk/2012/10/book-spotlight-mine-by-john-heldt.html
at October 04, 2012