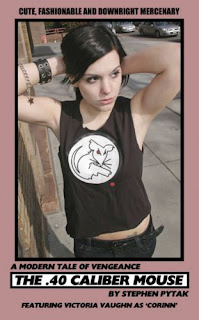 The first novel in The .40 Caliber Mouse series, this action-packed thriller is an introduction to Corinn Michaels. Artist. Computer hacker. Angry spirit. And a low-rent mercenary's key to starting a deadly online business.

Corinn is an Internet criminal haunted by spectres from her past. Five years back, the friends, lovers and accomplices she knew in college had reported her subversive activities to police. She did time. The betrayal changed her world. She suffered a breakdown, tortured by her memories of the ones that got away. Unable to move on, she believed her life was at an end.

A job offered encouraged her to reconsider her options. A stranger in black asked her to resume her life of crime, to become a new kind of terrorist, to start a website for a mercenary called The .40 Caliber Mouse. She grinned as she made the deal. "On one condition..."

The Mazz Press edition of this book features actress Victoria Vaughn as "Corinn" on the cover and the book includes 10 illustrations by Dash Martin.

It was a bit too violent for my taste, reminiscent of a first person shooter adventure video game, and I have never been into those types myself. There seemed to be a lot of violence for no apparent reason, but as you get further into the book, you realise there is a reason, that the unknown mercenary is not just only just accepting random gigs from the website Corinn set up for him, he is also hunting someone down. His past is revealed gradually, which keeps you guessing and keeps you reading to find out more.

I'm not sure that I could say that I enjoyed the book, some of it was a bit too gory for my taste, but it was interesting and it's the characterisation that keeps you coming back. Corinn is the angry young woman who thinks fate has dealt her a raw deal, then you have the mercenary himself whose story eventually elicits sympathy for him, and then you have another hit-man who is determined to get rid of the mercenary - how can he keep his prices up when the mercenary will do the same job for so little money? There are glimpses of humour in parts which helped a lot. It had the touch of a black comedy in it which saved it from being completely all about the violence and body count.