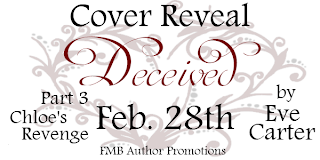 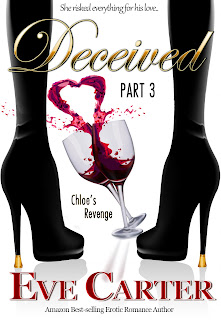 The steamy Deceived romance trilogy by Eve Carter, in the bestselling tradition of Fifty Shades of Grey by E. L. James and The Blackstone Affair by Raine Miller.


When Chloe Swanson, an innocent mid-western college graduate, lands her dream job in New York City, she doesn't realize what kind of a ride she's in for.

It doesn't take long before her boss, the charming and sharp businessman Patrick Collins, deceives her into being part of his plan to land the biggest account of his life.

However, he never expected that he would fall for her. Suddenly, he finds himself trapped between a ruthless billionaire client, who has her own eyes set on Patrick, and his deep affection for the beautiful Chloe.

What follows is a sensual and passionate journey of self-discovery, as Chloe faces the harsh reality of jealousy, love and money in the big city.

Stimulating, amusing and highly arousing, Deceived is a romance that will excite and titillate your senses.   Book 1 at amazon | Book 2 at amazon
at February 27, 2013