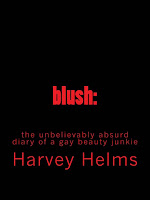 by Harvey Helms
GLBT/Mermoirs
Available in paperback and ebook

blush: the unbelievably absurd diary of a gay beauty junkie is a memoir based "traumedy" taken from the pages of Harvey Helms' diary, about a young gay man who accidentally ends up as one of the very first MALE beauty advisors selling behind a department store cosmetic counter in the south. Throw in She-Dragons, Man Drama, Lipstick, Tammy Faye Baker, Senator Jesse Helms, plus more than a large dose of gay man craziness and mix! You'll have one of the most twisted Mint Juleps you've ever tasted!


Through a humorous lens blush examines almost deadly bullying, and the not so pretty side of the cosmetic industry. Men behind cosmetic counters are seen as the norm today. When Harvey started it was more like he was part of a freak show that is vividly conveyed in the first chapter "I'm the Revlon Girl." The book also gives an in-depth look at growing up gay in an intolerant world and being authentically yourself against all odds.

“Harvey Helms takes us along on his hysterical journey amidst the world of luxury cosmetics. His writing is as sharp as his story telling. It’s not only hilarious but also surprisingly moving! I loved blush!” -Cara Buono, Emmy Nominated Actress, Mad Men.

Harvey Helms is a beauty culturist and writer, drawing on 30 years of experience in cosmetics, fashion and design.


Harvey has held positions ranging from Global Director of Beauty for Revlon Cosmetics to Executive Director of Special Events for Donna Karan Beauty. Harvey currently lives and works in Silicon Valley, where he just finished writing his first book in a trilogy of three: an engaging tell-all on the cosmetic industry.