Book Spotlights: The Devil You Know and Red Haze by Adrian Lilly

Adrian Lilly is the author of the novels The Devil You Know and Red Haze. He is a fan of Gothic suspense movies and novels, which greatly influence his writing. Adrian's writing focuses on strong character development and the nuances of fear that build toward horror. The mansion in his first novel, The Devil You Know, was inspired by the grand mansions in the Victorian neighborhood where he lives.


Adrian writes novels, short stories, and poetry and has spent many years as a copywriter in the advertising industry. In addition, Adrian has directed two short films and co-directed a feature-length sci-fi comedy. 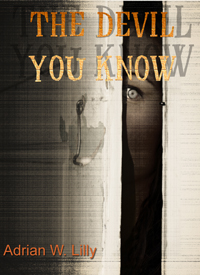 The Devil You Know
by Adrian Lilly
Psychological Horror
79,000 words

No cell phone. No computer. No contact with the outside world … And no way out!


With her father dying of cancer, 17-year-old Julie Collins and her parents move from Chicago to her father’s childhood home where he wishes to die. The house is a Victorian mansion on an isolated lake in the Upper Peninsula of Michigan.

The long abandoned home offers no familiar comfort. The TV hasn’t arrived, her cell phone can’t catch a signal, and her laptop has no connection. Worse yet, her new school is a one-room shack. Grieving and lonely, Julie feels life can’t get any worse.

Boredom lures Julie to the forbidden, burned library of the house, where her father said his parents died. But Julie encounters the restless spirit of a burning teenage boy.

Then he appears in her bedroom.

He tells her to killer her parents.

And Julie soon realizes hell can exist on earth …

Dark black plumes of smoke and steam billowed into the nighttime sky, vanishing in the darkness as they ascended away from the flames flickering from the engine of the burning pickup truck. The truck rested down an embankment at a 45 degree angle, the back end higher than the front. The one working headlight shined directly onto the leaf-covered ground. The shattered radiator hissed in the night.

Julie raised her head from the steering wheel and placed a lethargic hand to her head. Her vision blurred and she had the urge to pass out—until she heard the groans from in front of the truck.

She focused her eyes.

And looked through the cracked and blood splattered windshield.

Beyond the dancing flames, Julie saw the girl she had hit with the truck. She was pinned between the burning engine and a tree. The fire light reflected in the girl's shiny black eyes as she struggled to free herself, pulling away from the flames. As she pulled, her skin split and blood flowed from the gash. The girl howled in pain as flames danced across her skin.

The engine roared and the tires spun, throwing up dirt and leaves. Julie suddenly realized she still had the gas pedal pressed all the way to the floor. She released the pedal. The roar of the engine died down.

Julie pushed the handle of the truck door and it fell open with a loud clunk. Julie unfastened her belt and rolled out, falling into the leaves. The engine fire roared higher and the pinned girl howled as the flames overtook her body.

Nausea swept Julie and she rested in the leaves, trying to catch her breath. Blackness threatened to overtake her mind again—but she could not pass out. Julie felt panic fighting to control her mind. Julie refused, determined to make decisions, to plan out her actions. Think! Think! Think!

Julie felt the heat from the burning truck and lifted herself to her feet and scampered up the embankment. She placed her hand to her head and gently touched the cut on her forehead. She pulled back her fingers covered in blood. Julie wiped her hands on her shorts, and looked down at herself. The shorts and shirt she wore were Paul's, and the shoes she had on were Paul's mom's. Julie's face grew rigid in determination. She was not going to die tonight.

Standing in the road, she looked both directions. Far down the road, but rapidly approaching, points of flickering light raced toward her. Torches!

Julie slid back down the embankment. She darted behind a bush and pulled leaves over her body. She waited.

The group of towns people raced passed her, only turning their heads to acknowledge the burning truck and dead girl.

Among them, Mrs. Ramsden, stopped. Other townspeople continued past her as she looked at the burning truck. She took a step off the road. Her breath rattled from her lungs.

Mrs. Ramsden's eyes drifted across the burning truck to the smashed and burned girl. A horrid howl ripped from the woman's mouth as she lifted her face to the moon in rage. The moonlight fell across her horse-like face. Julie could see how horribly it was changing, morphing, showing the real face beneath the human flesh.

Blood and saliva dripped from Mrs. Ramsden's mouth, falling on the leaves in front of Julie, splattering on her hand. Julie felt bile rise in her throat and clenched her teeth.

She clenched her eyes shut.

Mrs. Ramsden rested her hand on the bush above Julie, her long nails clacking against the branches as they twittered in the night wind. The leaves covering Julie stirred with the wind and drifted away, exposing her legs.

As her heart pounded, Julie lay perfectly still, willing Mrs. Ramsden to move on down the road. Go away, please go away. Tears sprouted under Julie's eyes, and drifted down her checks, leaving tracks in the dirt covering her skin.

Julie could not believe that 30 days ago, she thought she had a perfect life, perfect parents, and now—now she was here—hiding in leaves, hoping not to die.

She heard the leaves crunch as Mrs. Ramsden took another step closer.

The book at is available at amazon   *** 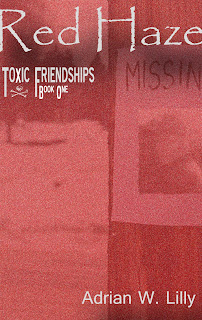 Something sinister is happening at Grove University.


Some nights the woods on the edge of campus glow with a spectral, shimmering red haze. Marne knows—she’s seen it.

She also saw a figure in the haze. He beckoned to her and then vanished.

Marne shrugs off the incident until her roommate, Sara, shows her a picture of a student. The one Marne saw in the woods.

But he’s been dead for more than a year.

Suddenly, Marne and Sara are tangled in a secret that threatens their college careers—and their lives. Their only hope is to find the cause of the red haze…

Before someone else dies.

Red Haze is a haunting psychological thriller that hovers between the spectral and the natural, blurring the lines between remembrance and regret, dedication and obsession, justice and revenge.

Brad Rogers tightened his tie as he pushed through the front door of the Rho Epsilon Delta fraternity house and skidded down the steps to the street where his car was parked. A hangover pounded across the front of his head, and he was running late for his internship. The sun only hinted at rising, tinting the clouds above him a pale pink, and gloom hung in the early morning haze. He stepped in a puddle from rain the night before and felt the water splash up on his calf. “Shit.”

His internship, mandatory as a business major, was a bit of a pain in the ass as far as he was concerned. He had done his best to avoid morning classes only to be in an office at eight in the morning. He figured he would have enough of that once he graduated. He shook his head in disgust and started the car. He rubbed his bloodshot eyes and ran his hand over his short, brown hair before throwing the car into gear.

The wipers slapped across the windshield in a slow beat, clearing the light drops of rain that gathered on the glass. The row of sorority and fraternity houses pulled away into miniature dollhouse versions in his rearview mirror as Brad pulled onto a main thoroughfare. He fiddled with the radio as he coasted to a red light. He looked at the clock: 7:55. Being five minutes late isn’t such a big deal.

By lunch, his headache had subsided and his half day at the office was over. The owner of the company had felt differently about being five minutes late, and Brad was still fuming about getting his ass chewed. But, he needed a letter of recommendation after college and it counted toward his grade for his business class. He decided he would make an extra effort not to drink before his next day at the office. But it’s rush week—what do they expect?

As Brad stuck the keys in the ignition, he noticed a piece of paper on the passenger seat. It was folded in fours. He picked it up and flipped it over. Trust no one was written on the paper.

A still from a video was printed on the sheet. The video showed Brad, ringleader of the hazing on the night a student, Wes German, died.

Brad folded the sheet back up and laid it on the seat and folded his hands in his lap.

He turned suddenly and looked in the backseat. It was empty. But it’s in my car!

How did it get in my fucking car? Brad thought: Was the door locked just now? He didn’t notice but he always locked his car, or so he thought. He doubted the note could have been there this morning and he didn’t see it. But he had been in a rush and hung over. Was the car locked this morning?

And last night—it was a blur. A group had hit a couple bars in town. Who had been in his car? Reg. Kip. A couple of pledges. Their names wouldn’t come to him right now. “Think. Think.” He hit the steering wheel.

Was this a warning—or advice? He wondered. Brad looked around to make sure no one else was in the parking lot. He snatched the paper and unfolded it again. The image showed him so clearly. His mind brought the night into sharp relief. He followed Wes into the woods and found him disconnecting a camera from a tree. Brad had never seen the footage on Wes’s camera. Was this it? But Reg had destroyed it, or so he told Brad.

Reg had been in his car last night. Brad knew that for sure. Shit! Reg has been my best friend since junior high! Brad tried to start the car but his hand was shaking too much to get the key in the ignition. Would Reg and Staci be doing this? Would they try to find their way out of what they had all three done? The thoughts tumbled through Brad’s mind, making him feel both betrayed and betrayer. Brad’s instinct was to confront them. Beat it out of them if he had to. He felt the rage build within him. He clenched his hands around the steering wheel. They had told him to hide the body. It was their idea. His headache roared back to life as blood pounded in his temples. His mouth felt dry and pasty. Panicked gasps caught in Brad’s tight throat, made him feel like he was suffocating. He pulled on the knot of his tie and puffed out his flushed cheeks in a great exhale. Brad took a slow, deep breath and waited. He clenched his eyes closed and counted silently. What if it isn’t them? What if someone else knows?

Brad took another deep breath and stuck his key in the ignition. He had to figure out who sent the letter without letting anyone else know he received it. He had to find the sender of the note and stop him. At all costs.

The book is available from Smashwords & Amazon