I am the sort of reader who likes to be completely captured by a book, transported into another world. My friend told me the other day that in the seven years I have known her, I have passiionately declared at least 100 books my favourite because I become so obsessed with books when I am reading them.


I am also currently writing a series of books called "The Faith" which are based on a family who follow a Goddess based religion, living in a Faith Union which consists of ten husbands and wives. This series then follows the lives of this family, The Trevelyons across the generations.

Any book I start always begins as a “world” in my head. I spend a great deal of time thinking about the characters and their lives. Then, after a while, I start to write down any scenes which I have gone over and over in my head. Finally, I start to connect those scenes into one story. As a result, it takes a long time to read over my work and make sure it will make sense to anyone who hasn’t been in my head for the past five years!

Always. I am always changing plots and endings as I explore a character further. Some characters get completely different endings than the ones I originally intended for them because as the character develops, I start to imagine other stories for them. Several characters that were just meant to be small parts of the narrative become integral parts of my stories.

Anything with chocolate in – I know it’s a cliché but I just can’t help it.

Definitely a night owl. If I didn’t have to go to work I would never be up before 11 and in my holidays I often get into a routine of staying up until it gets light. (Partly a result of watching too many horror films)

Although there are many places round the world I would like to see, I have a terrible fear of flying and as a result never think about flying anywhere. I did it once and promised myself I would never do it again. However, my best friend is getting married abroad this year so am being forced into trying to conquer this fear. Hopefully after this holiday I will be able to put this fear behind me and start dreaming of different places I might actually be able to go.

Rather than distant places, as due to the aforementioned fear of flying I haven’t been to many places, I like to take familiar places and change reality slightly, creating a different world for my characters to live in.

Rather than music, I generally have easy viewing TV on, preferably things I have seen before so that I do not get distracted by the plot. 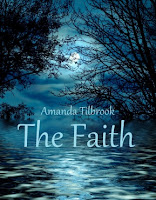 I have just recently self-published my debut novel “The Faith”. It is available on Amazon and Lulu in e-book
format. “The Faith” is the story of a family, the Trevelyons, who follow a Goddess based religion in which the followers practise polygamy. Unlike many polygamous societies, the Faithful include both multiple husbands and wives in their Unions. I have tried to explore the challenges and jealousies that this kind of relationship might present and to look at what might motivate different people to join a polygamous marriage.

I think my biggest lesson was that just because you write something you understand, doesn’t mean other people will get it. I gave my first draft to friends and family to read, asking for honest comments. My brutally honest mother and sister came back with a whole list of plot and character holes that made no sense without more explanation. This process was very useful and I was very lucky to have a lot of friends and colleagues who were willing to read any number of drafts.

I think it’s probably too early to say. In a year or so I will hopefully have more insight into how self-publishing and marketing work.

I think everything around me has influenced my writing, every film I have ever watched, every book I have ever read. I guess the person I have to thank for influencing my writing most is one of my best friends, Terri. She was the first person I knew who had imaginary “worlds” the way I did and we spent much of our time at college writing down scenes and events from these worlds for each other to read.

As I am just starting out myself I guess my advice would be not to give up.

I can never pick just one book or writer because I like so many different genres. The authors I have to buy in hardback because I like them so much I cannot wait for paperback are: Karin Slaughter, Lisa Gardner, Sophie Hannah and Tanya Huff.

The books I have re-read over and over and probably will continue to do so are: “Anne of Green Gables”, “Harry Potter and the Deathly Hallows”, “Swordspoint” and “Interview with a Vampire”.

This is Victoria’s story. At seventeen, along with her best friend Luca, she converted to “The Faith” and joined the Trevelyon Union. Gaining four husbands and five wives, they were given a chance at a whole new life.

Now twenty three, Victoria has been married for almost seven years and her marriage is, on the surface, the perfect example of a Faith Union. Together they have nine beautiful children, run a successful law firm which protects the rights of the Faithful and are well respected throughout Faith society. Underneath this veneer, are a variety of individuals who all joined the marriage for different reasons. Some joined for their Faith, some for friendship, some for love. Some joined because they felt they had no other choice.

When tragedy strikes, the Trevelyons have to pull together to protect each other and their children from outside threats. What they fail to realise is that the greatest threat to their family is from within.

Katie, as she had been then, picked up a car at the station, paying for it with a credit card.


I looked at my oldest friend, who raised his eyebrows at the sudden ease with which Katie had found funds. It had just been the three of us for weeks; Katie, him and me. We had assumed she was as poor as us. She caught the look I sent him and grinned.

“I told you I had money, told you that I could give you anything.”

I just looked at her for a long moment. She had told us that; tales of ballrooms and diamonds that we had assumed were just stories. Pretty talk that I had not troubled myself to wonder about.

She looked back at me, her pretty eyes twinkling. “You didn’t believe me?”

“And you came with me anyway?”

I laughed. “Did you think we came for the money?”

Katie looked vulnerable for an instant, younger than she ever had before. In fact suddenly, she did not seem any older than us. She looked away. “I would not have blamed you for it.”

Did she really think we had followed her across Europe for stories of riches?

I stepped towards her then and kissed her cheek impulsively. “We would have followed you to live outdoors like animals if that is what you had offered.”

He laughed and rolled his eyes, gesturing for us to follow him to the car.

We drove for miles, sprawled across the front seat of the Sedan. The countryside seemed much greyer than what we’d been used to in and I couldn’t be bothered to look. Instead, I leant up against her, my legs resting across him. I had fallen asleep on her shoulder, her free arm resting around me but I jolted awake as we came to a stop.

We were parked in front of metal gates. I blinked a couple of times and sat up. I started to ask Katie where we were but stopped at the look on her face. She was as white as a sheet.

Katie turned to us, looking stern and serious. “I need you to stay quiet, just agree with anything I say. I don’t know how everyone is going to react.”

“I thought these people were your family?” he asked, his beautiful face worried. He was concerned but I did not care. I was years passed caring. The new sudden purpose of my life was remaining with Katie. I would agree to anything in order to stay with her. He had always been more of a thinker than I.

“They are, it’s just…I left without warning. I don’t know if they will be happy to see me.”

I wondered why she had left. Three months can seem like a lifetime but it was not enough time to know someone’s history.

He just nodded without commenting. We both understood what it was like to run away.

We climbed out of the car and approached the metal gates. They were attached to a ten foot metal fence, which seemed to run for miles.

“Be careful,” Katie said sharply to us, “It’s electric.”

Katie didn’t reply. He looked anxiously back at it but even the fence did not inspire doubt in me. I had absolute trust in her. Out of the hut on the other side of the gates, a man had appeared. He was wearing a rifle over his shoulder and he was staring at Katie in amazement.

The Faith is available at amazon | amazon uk | lulu