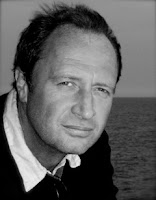 Joss Gibson studied English and American Literature at the University of Kent at Canterbury before becoming a journalist.

From local papers and radio, he moved to television current affairs as a director and then film drama, initially as a location manager and first assistant director, and later as a producer, winning an Emmy Award as co-producer of the BBC film Gloriana.

At various times he has also worked as a scriptwriter and teacher of creative writing, psychology and media.

American Rebel is the first in a series of novels with continuing characters planned by Gibson. Set against the backdrop of the great political events of the sixties, the series is designed to thrill and intrigue, to be historically accurate and to evoke a powerful sense of the times.

The next in the series, titled ‘Let Them Come to Berlin’ leads off from Kennedy’s famous 1963 speech in Berlin and again features journalist Ray Halliwell as the main character, as well as other familiar faces from American Rebel.

Let Them Come to Berlin is a Cold War thriller, inspired by Le Carré’s, The Spy Who Came in from the Cold and is due for publication in the Spring of 2013. 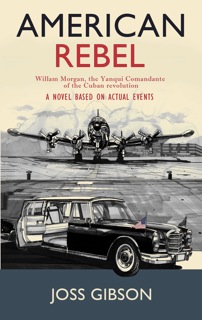 Where did the idea of writing about William Morgan and Cuba come from?

The idea was born of pure serendipity. I love secondhand books and bookshops. One day, I stumbled across William Morgan’s name in a book called Cuba: An American Tragedy by Robert Scheer and Maurice Zeitlin, published in 1964 by Penguin. There was only a paragraph or so about Morgan, but with tantalizing hints of an intriguing story. I was hooked.

This is your first novel. What is your background?

My background is journalism. I studied English and American Literature at college and then went through the usual route of local newspapers, even a little local radio, before moving into television as a producer/director in documentary social affairs. But the lure of working in drama was always there.

I took a few steps back down the ladder and became a location manager, then a first assistant director in TV and film drama, before becoming a producer. As a producer, I worked in a niche area, translating theatre to film, working with a fabulous man called John Wyver of Illuminations.

Together, we did opera with Phyllida Lloyd directing Gloriana by Benjamin Britten. We picked up an Emmy for best performance film for that. But also pure theatre projects like Macbeth with the Royal Shakespeare company and Richard II with Fiona Shaw in the lead, directed by Deborah Warner.

What attracted you to this particular story?

Twenty-five years ago, I wrote a screenplay based on Morgan’s rise and fall, told from the point of view of an invented journalist named Calvin Towne. Granada Films picked up the screenplay and Leigh Jackson came on board as co-writer. For a few months, we raced to meet editorial deadlines, only for the project to be dropped when Sydney Pollack’s Havana, starring Robert Redford, failed to ignite audiences at the box office.

For some years, the story sat on the back burner. When circumstances allowed a concentrated period of writing, I found myself drawn once again to the tale of Morgan’s spectacular rise and tragic fall, finding in the story a series of contradictions and conundrums, a poignancy, the seeds of a comic book adventure, a moral tale, even a certain mythic quality.

There was also a political dimension I wanted to explore, namely how to make the middle road between the extremes of left and right, capitalism and communism, an attractive, viable option. Morgan seemed to do that in his life and I thought the example stood the test of time and provided a pointer to our own troubled times.

You decided to combine fact and fiction. Why?

The facts of Morgan’s life were in themselves, compelling. But in order to shape a coherent story, and indeed to explain the complicated politics of the time to new readers not even born when the revolution took place, I wanted to have an interpreter if you like. Hence the creation of Ray Halliwell, a journalist who tracks Morgan’s development, interacts with him and allows the reader a different perspective on events as they unfold.

Are there particular problems in writing about real people and real events in fiction?

Very much so, and the pitfalls grow with each passing year. At one time, libel was naturally the great issue in writing about those still living who were involved in actual historical events. Now there’s the right to privacy and the right to publicity to contend with as well. The extension of these rights to the descendants of those you’re writing about is another recent development. The first amendment is on the other side of the scales, still in my opinion, the cornerstone of a free society and free expression.

The way I’ve approached the problem is to be completely upfront about the distinction between what is ‘true’—in other words what can be documented independently from a number of sources—and what is invented. I’ve tried to lay this out in the author’s note at the end of the book. Having said that, it’s important to remember that history—as Churchill had it—tends to be written by the victors and is necessarily partial itself.

I hope I have been very serious about the research, diligent in changing names and places to protect privacy, extremely careful in how I depict people and always clear that American Rebel is fiction, a good—I hope—story with the ambition of delivering an imaginative truth that does not harm the reputations of those involved or casually contradict the known facts. It’s a balancing act, just as the legal implications are a balancing act between the rights of individuals and the right to free speech and fair comment.

How did you do the research?

Any way I could. Contacting those involved, reading everything I could lay my hands on, watching films from the time, soaking up the social conditions of the fifties and trying to understand the complex mechanisms churning in the background. That means the politics certainly, but also something of the more intangible forces around then. Fear for example. Fear of communists, fear of invasion, that sort of thing.

It’s important to remember that we’re right on the cusp of the fifties becoming the sixties and a radical shift in societal values. Youth culture is coming to the fore, Rebel Without a Cause and all of that, is beginning to permeate the culture. The average age of the rebels with Morgan’s band is roughly early twenties. That’s a remarkable idea, even today.

You have an epigraph from Chekhov, ‘in order to live in the present, we must first redeem the past’. Is that the theme of the novel?

I guess it is. To be honest, the theme emerged in the course of writing but I began to realize that both the macro element—America and Cuba for instance—and the characters themselves, were in some way seeking redemption and in the case of Morgan and his wife, actively, courageously, pursuing better lives for themselves and their comrades and the people of Cuba by fighting the dictator and putting their lives on the line. Of course, the idea of redemption takes on another dimension when you look at a character like Morgan, kicked out of the US Army, who works for the mob running guns but ends his days as a hero and a moral hero at that.

The style of the novel is very visual, very filmic. Is that deliberate?

Yes, but for two quite distinct reasons. The first is straightforward. The story was first written as a film script and a lot of the material that went into the script was transferred wholesale to the book. The second reason is a much more conscious attempt to attract readers—new readers especially—brought up in a visual culture that relies on screens and bite sized information. I was trying to find a style that would satisfy the Potter generation looking for new reading material without dumbing down on content. Film seemed to me the appropriate metaphor and the appropriate style.

Cuba is inevitably a politically charged subject. How did you approach this issue?

The attempt to please all the people all the time is futile. Some will take issue with my approach and especially the clear statement of a political position in relation to the events of the story. But I’d rather be upfront and clear in my stance. Let other argue their case against with equal freedom. I must also say I am not an expert on Cuban politics, on American foreign policy and international relations. I am a novelist and a writer interested in people, but people who live in the real world and sometimes die because of a fixed idea. That junction—between humans in all their contradictory, mercurial beauty—and the rigid thinking that characterizes dogma, fascinates me.

Can you tell us something about the writing process? Do you have a set routine with writing?

Writing, for me, is hard work. Five years have gone into this book. Five years of research yes, but also pure hard work, sitting at the computer trying to make a single sentence flow, and failing. I have only one rule. A thousand words a day. The next day, the same rule applies, whether it takes three hours or twelve hours. Getting your unconscious to do its job is like training a difficult puppy. Carrot and stick but the rule never changes.

The best part—and the most important part for me—is the time after the writing day. Then you can do other things, like fix the fence, swim, whatever, and make friends again with your unconscious puppy, play at what might have been during that day’s writing, and what might be tomorrow. That’s the creative time. Other than that, I can only say that the old adage of re-writing is absolutely true. I must have written 300,000 words to end up with 100,000, and most of those have changed over time. The other analogy that works for me is cooking. Choose the best ingredients, pay attention to the process, but above all allow those ingredients to blend to become something new. Most manuscripts, said a successful novelist who’s name escapes me, are simply submitted too early, before they are ‘cooked’.

In order to live in the present, we must first redeem the past..." Anton Chekhov, The Cherry Orchard. They said William Morgan was a traitor. They said he was a communist. They said he was a CIA agent. They took away his US citizenship and then erased his name from the history books. Now, fifty years on, a woman's enduring love is about to reveal the truth behind the secrets and lies. Maria Jensen is taking her case to the highest authority in the land - the US Senate. But in taking on the government, Maria must face her own demons and re-live a past long buried. One man can help. Ray Halliwell was a witness. He shared the good times and the bad. And long ago, he loved her. Together, Ray and Maria embark on a difficult journey - to another place and another time. Cuba, 1957...