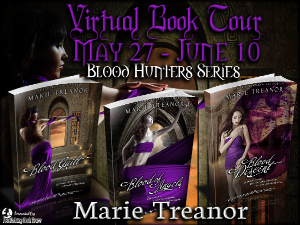 Award winning author Marie Treanor lives in Scotland with her eccentric husband and three much-too-smart children. Having grown bored with city life, she resides these days in a picturesque village by the sea where she is lucky enough to enjoy herself avoiding housework and writing sensual stories of paranormal romance and fantasy.

I plan a little bit now, and then the story flows off on its own :). It doesn’t always keep to the original plan, but I have found the hard way that a broad, flexible plan does help!

All the time, damn them. I usually let them. When I don’t, the story never works, so I’ve learned to give in, however annoying it might be!

Ooh, cake and chocolate and ice cream and other sweet stuff that’s really bad for you!

I used to be very much a night owl, but gradually, after my children were born, I seemed to change, and now I’m up before 6 every morning and about ready for bed by 10pm!

Anywhere sunny, because I get so depressed by the Scottish rain and dull, grey skies! I like a bit of culture and history with my sun, though. Recently I’ve spent wonderful time in Turkey, Malta and Italy and would love to see more of all those places! I’d also like to go back to Hungary and Romania, since I’ve set so many recent books there and it’s been a LONG time since I visited those countries. Where else? Russia, America, North Africa, India…

Yes! I love interesting and exotic settings. As I said, I’ve featured Hungary and Romania in some of my books. I live in Scotland, so I also use Scottish backgrounds a lot – home to me, but distant to lots of people :). BLOOD ETERNAL was set partly in the Turkish hills, BLOOD GUILT’s climax took place in Malta…

Sometimes. It depends on my mood. Sometimes I need total silence. Other times the silence irks me and I need background music! Sometimes the music even inspires the story – for example, I wrote SMOKE AND MIRRORS to my sons’ favourite, System of a Down :).

I’d love to! BLOOD DESCENT is the third of the Blood Hunters series, and although I don’t plan on it being the last of the series, it is a bit of a milestone where several major story arcs that have stretched over even from the prequel series Awakened by Blood, reach a conclusion.

My hero, Konrad, is the leader of the team of vampire hunters who first appeared as Elizabeth Silk’s friends and mentors in BLOOD ON SILK (Awakened by Blood, 1). As the dynamic between vampire and hunter changed, Konrad was the most resistant until, rejecting any kind of alliance with the undead, he turned against the hunter network and sets out on his own to destroy the alliance. He sees only evil in vampires – and in some ways he’s right! But when he encounters the curiously human Glaswegian vampire Maggie and they go off on adventures together, he’s forced to see the evil in himself as well as the good in her :).

Oh goodness – far too much to write here! And of course, publishing’s changing so fast that what I learned five years ago is no longer true. The holy grail for romance writers used to be one of the big New York publishers – I’m happy to say I’ve done that :)  – but now even some well established authors are learning there can be more readers and more money to be made in self-publishing – which of course used to be looked down on! There are so many more doors to publishing now that it can be confusing, but it’s also wonderful finding out which is best for you as a writer of a particular book, rather than trying to cram yourself and your work through one tiny, ever-shrinking opening.

I think the most important thing I’ve learned is to keep on learning! Both in writing, and in publishing.

I’d believe in myself more, and learn more about self-promotion a lot earlier :).

Everything! History, culture, people around me, strangers’ faces, books I read, films and television – even advertisements!


Anything you would say to those just starting out in the craft?

Don’t give up! Keep reading as well as writing, and listen to constructive criticism from people you respect, so that you make all your work as good as it can be.

My favourite writer of all time is Dorothy Dunnett, a Scottish author who wrote epic historical series and fun, intelligent mysteries. I loved her style and her wit as well as her sheer storytelling ability, and characters who won’t let go.

Thanks for interviewing me! :)

Mihaela, a fearless vampire hunter secretly haunted by loneliness and childhood tragedy, finds it difficult to adjust to the new world order where vampires are not always the bad guys. She's taking a much needed vacation in Scotland when she sees a little boy being chased through the streets of Edinburgh. Rescuing him brings bigger problems - two vampires from her past: Gavril, who killed her family; and the reclusive and troubled Maximilian, gifted Renaissance artist and one-time overlord of the most powerful undead community in the world. Maximilian once saved her life and now needs that favor returned.

The earth moves for Mihaela in more ways than one. From Scotland to Budapest and Malta, she races against time to prevent a disastrous, vampire-induced earthquake and save an innocent yet powerful child – all while fighting a dreadful attraction to Maximilian, her only ally, whom she can’t afford to trust. For Maximilian, the hunter becomes a symbol of renewed existence, as he struggles to accept his past and rediscovers his appetite for blood and sex - and maybe even happiness.

Six months ago, vampire hunter and inventive genius Istvan nearly died in the seminal battle that would change the relationship between humans and vampires forever.

A year before that, he first encountered sexy vampiress, Angyalka, owner of the Angel Club, favored haunt of the undead. Istvan won that round, but when he recklessly seeks her out again in search of the secret of angels, he's alone and so exhausted he can barely stand, let alone fight vampires. Plus Angyalka's out for revenge, and very happy to use his powerful sexual attraction to her…

But Angyalka has her own secret weaknesses amd terrifying strengths even she doesn't understand. Their battle becomes one of wits and sex, but when someone bombs the club, they fight together to contain all the threats closing in on the Angel, from humans and vampires, including the sadistic killer who could just be dangerous enough to finally topple undead overlord Saloman.

As Istvan struggles to harness the mysterious power of angels, Angyalka needs a deeper strength to send away the fascinating hunter who delivers on all her deepest sensual desires and yet can't come to terms with her vampire nature.

A child is born...into the final showdown of Vampire and Hunter

The face of a killer, the heart of a lost child…

Konrad once led the legendary first team of Hungarian vampire hunters. Now, refusing to ally with the undead, he goes his own way, slaughtering vampires across the length and breadth of Europe.

The dying thoughts of one such vampire send Konrad to Britain in search of a dangerous instrument that might be just what he needs in his obsessive war with undead overlord Saloman – a war he’s determined to win at any cost. The only being who can lead him to the instrument and its current, evil possessor, is sexy, mysterious, young Glaswegian vampire Maggie, who holds herself aloof from her own kind.

Maggie sees much more than Konrad’s anger and cruelty. She makes it her mission to reach beyond the horrors of his past and find the man he should have been. Difficult, when he threatens her heart as well as everything she believes in; and when her whole being clamors for his body and his blood.

While journalists circle, about to break the news of vampire existence on mainstream television, Elizabeth Silk labors to give birth to Saloman’s daughter: and Maggie plays a dangerous game that risks everyone for her belief in one troubled man.