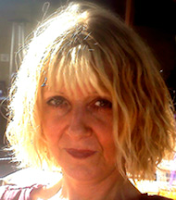 I'm Welsh and relocated to Los Angeles in 2005. I'm a film critic for Yahoo! and Entertainment Magazine and a member of the Motion Picture Association of America. I have previously sold comedy drama to BBC TV and a film to REN Media International, Beverly Hills. How I Exiled My Inner Bitch is my debut novel.

I spend a lot of time on structuring the story before I begin. First, there's a short treatment, with all the plot points marked, and then it begins to grow until it's a book.

Not the plot, as that's already in place, but reactions come from then.

Neither or both, whichever way you look at it!

I dreamed of travelling to Los Angeles, and I'm here.

No. They're all familiar.

No. I have to have complete silence.

It's a story about an anti-social woman who tries to hide her imaginary friend from her boyfriend and his anti-social daughters.

I learn something new every time I go on a forum, which is every day.

I would have started writing earlier in my life.

Only people I meet influence my writing.

Bury your ego and take criticism from people who know what they're talking about. 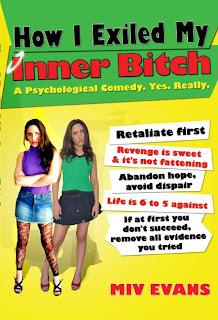 Dionne is 36, and still hooked on the imaginary twin she invented to get you through her desolate childhood. With such an odd companion, long-term relationships are impossible and she is doomed to live her life as a serial monogamist, until the Go Along Guy shows up. Greg has denial on intravenous, so Dionne's quirks simply pass him by and, pretty soon, shallow love blossoms. Unfortunately, however, what are also blossoming are Greg's teenage daughters. They don't like Dionne and their hormones are raging.

Any websites/places readers can find you on the web -

In the gloomy house, in the gloomy room, a gloomy ten-year-old girl is watching an ‘R’ rated movie on her own. Her dark hair is dragged back from her pale face and the ends of her ponytail are tangled. She's sitting on a light blue couch that's resting on a dark blue carpet, and perhaps it's the reflection of those colors that's making her eyes look so blue. If she were, by chance, to smile, her new braces would show, which are yet another burden in her encumbered life.