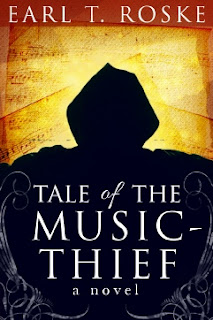 Imagine if every song you knew was disappearing. Not just off the page, but from your very mind. This is what is happening to the citizens of City- Along- The- Lake. Music is being stolen from the minds of everyone. No song is safe from theft. While those in charge believe this is an illness that can be cured by the medicos, Allegra, a young, immigrant opera singer, believes she’s seen the person responsible for stealing the music.

Allegra came to the city to avoid her past. While attending a conservatory, her clan was eradicated by a plague. Now she is left with only songs and memories that she finds too painful to recall but too important to lose. To protect the memories of her past, Allegra must find, follow, and catch the music- thief before all music is gone. Along the way, Allegra is forced to face her memories to access the songs so she can continue her pursuit.

Haunted by strange dreams based on her childhood, Allegra continues her journey with the aide of a seven foot tall magicnician, a drayman who happens to be the husband of a lake siren, several highwaymen, a trader of musical instruments and a reclusive musical prodigy, and a Giant named Yib.

Allegra only has a fortnight to catch the music- thief or risk all music disappearing.

Allegra feigned a long drink. If she was going to play just one more she wanted to leave the tavern with smiling faces, happy to have been entertained. This was supposed to be a place to come and relax and enjoy the few hours hard labor left a person. She needed a good humored song to leave them with.

While the tavern patrons generated a buzz of conversation Allegra retuned the lute. She searched her brain for some song that was recognizable, funny, and still playable. Several songs flitted to the forefront of her mind but when she went to focus on them they fell apart and blew away. The obvious choice was the story of the shepherdess and the young man who falls in love with her. But that reminded her of another song. A song about a young magicnician that built a love crystal that went horribly wrong.

The shepherdess song was from the country-side, when she’d take a small vacation away from the city. The young magicnician song was one of the first songs she’d heard when she first came to the city. It had been popular when she first arrived. The city was not only a major center for music, but since the end of the magic wars, it was also a key location of magical learning and design. Many young apprentices came to the city to work for some of the most well known magic businesses and individual magicnicians. The intersection between the magicians and the industrial laborers made the song all the more amusing for many in the taverns since they got to have a good laugh at the magicnician’s expense.

Allegra plucked the melody of the song and sang the first few lines that introduced the magicnician and his ill-fated desire for the lord’s daughter. The buzz of conversation changed key, rising as those who recognized the song shared the information with those near them who did not. There was also a level of surprise that they still recalled such a popular song. However, Allegra knew that even though it was popular, it, too, was also rarely sung these days. Another song had taken its place but she couldn’t recall it well enough to explain it even to herself.

The attending patrons stopped talking as Allegra continued to pluck the melody. Some were already nodding in knowing anticipation of what was to happen. Allegra strummed a chord and began to sing.

She sang of the young and prideful magicnician first arriving in City-Along-The-Lake, eager to prove his worth and to rise into the higher financial circles. But he was not the most socially adept person and often found himself outside looking in. Then one day he saw the daughter of one of the wealthiest nobles in the city. He knew if he could win her heart, she would be his key of entrance.

The patrons surprised Allegra with their sudden outburst of the chorus. She leaned back in mock surprise, raising a few good natured laughs. The chorus warned that what a person wants isn’t necessarily what they need and if you cheat fate, fate has a way of kicking you hard in the shins.

As the patrons roared their way through the chorus Allegra noticed more people entering the tavern. All the seats were filled and some where beginning to line up along the walls, pints in hand.

The second verse told how the young magicnician tried to woo the lord’s daughter with flowers of colored air and singing porcelain birds. But no matter his gifts or his clumsy words, she showed no interest in the young technician.

The chorus came again, though not as loud as before. The people along the outside edges of the room sang the loudest. Those near the middle of the room seemed perplexed and confused.

Allegra sang the third verse, stumbling over some of the lines; something she had never done before. She assumed that it was the quantity of alcohol. Though a bit ragged, the third verse reached its end.

This time the chorus was extremely weak. Only a handful of people in the corners were still singing. Others in the room looked around at those who sang. They looked as if they’d never heard the song before even though they’d just been shouting the chorus themselves. But there was one man who wasn’t singing and didn’t seem surprised at all.

Almost in the very center of the room sat a man, a sneer on his face. He was wrapped in a traveling cloak, the hood still up, and his hands hidden in the folds. A crystal object about the size of a small pumpkin was resting in the crook of one arm.

Allegra almost missed her entrance for the third verse. The magicnician suddenly decided that he knew how to win the young woman to his side. All he had to do was to create…. Create? Allegra wasn’t sure what he was supposed to create. She knew she’d known it before, but now it was gone, sliding off to one side of her mind when she pushed at it. Just as quickly, the rest of the song flew into tatters and disappeared from her brain.

In front of her the patrons sat and stared in bewilderment. She was sure they were wondering why she wasn’t singing? Everyone was quietly stunned by the draining of the song from their minds. Only one person seemed to be unsurprised. Allegra’s eyes were drawn back to the man buried in his cloak and holding the round, crystal object.

There gazes met and locked. Allegra set the lute down and got to her feet. She wanted to talk to this man. Why was his reaction different from everyone elses?

He saw Allegra rise to her feet and was quickly up on his. His stool got tangled between his feet and he stumbled backwards. The crystal object nearly fell and the man caught it with a juggling motion and just as quickly pushed it back inside his cloak. But Allegra had seen it clear: a crystal teapot.

“Watch it, mate,” said the patron who’d caught him as he nearly fell. “Might want to ease back on those pints, if you know what I mean.”

The others around them laughed but the man in the cloak pushed them away and staggered towards the front door.

“If you can’t hold your liquor, mate, you shouldn’t be out with the men.”

There was general laughter by those nearby. Others laughed, too, unsure of what was happening, but glad to join in to distract themselves from the unease caused by the disappearing music.

Allegra tried to follow, to catch the man in the cloak. But the crowd around the tables was thick and in a general state of agitation. Many of them tried to stop Allegra to ask what happened and would she sing another song. She tried to excuse herself politely and continue after the man but hands slowed her even further.

“Sir. A moment,” Allegra said to the back of the cloaked man who was moving closer to the door. He rudely shoved several patrons out of his way. Several blocked his way, demanding an apology.

Allegra was only a few feet behind him now. “Please wait. I just want to talk to you.”

“Seems the young lad fancies a word with you as well,” said one of the patrons blocking the man’s path. The patron was a stone and brick layer. His arms and chest where intimidating in width. “Perhaps you owe him an apology as well?”

The man looked back at Allegra who was now with an arms reach of him. He turned back to the men who blocked his way, snarled something rude enough to make the brick layer step back in surprise, and threw a small clay sphere up towards the ceiling.

Clay spheres where used to hold spells until ready for use. All a person had to do was break the sphere to release the spell. They were common enough, the spell spheres, often sold in sidewalk stands, that did things like dry clothes after a person had been caught in a rainstorm, or cleared all the dust out of a room. There were other kinds of spheres that a person had to get from a magic shop. Still others required a license to obtain. Then there were others that weren’t supposed to exist, some so evil that a person caught using or possessing them could spend the remainder of their days in one of the prison mines.

The clay sphere the man in the cloak threw upwards was a gray area sphere. It wasn’t technically illegal but it was also one that required a very special permit to possess. When it hit the ceiling above there heads it exploded into a flash of darkness that settled upon those within twenty feet of the sphere. The spelled sucked all light out of the area. Even a handful of light crystals would fail to pierce the darkness. Only the owner of the sphere would be unhindered.

Allegra recognized the problem as soon as the darkness began to descend. She lunged forward and grabbed at the man’s cloak and held tight even as she felt him pulling away from her. For a moment she was sure she’d manage to stop him.

“Who are you?” Allegra had to shout over the rising panic and confusion in the tavern.

The tension in the cloak’s cloth suddenly increased. Allegra could feel the cloak slipping form her hand. She struggled blindly to the door and fell out of the tavern, staggering around on the sidewalk until she excited the bubble of darkness. The man in the cloak was gone.

Visit the author at: www.earltroske.com