Book Spotlight: Sunshine: Diary of an Affair by E.J. Caulder 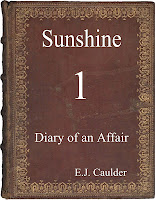 Title – Sunshine: Diary of An Affair

Synopsis - Eric Simmons is a man on a mission to pursue his ultimate goal of being inducted to the radio broadcasting hall of fame. But not all is going as planned. Eric is at a crossroads in life and questions whether his personal and professional decisions have all been the wrong ones. As he questions his life, fate brings Tina Cook into Eric's life and he believes she's the woman he's meant to spend the rest of his life with. There's just one problem: Tina Cook is married.

But she is unhappily married and seeks comfort in her friendship with Eric. As their friendship grows into something more, Eric wonders if Tina will leave her husband to build a life with him. Tina's husband becomes suspicious of their friendship and it causes Tina and Eric to take their friendship to the shadows in an effort to keep their budding affair a secret. Eric conspires to win Tina's heart and show her why leaving her husband is exactly the right thing to do.

Tina struggles with her attraction to Eric and the vow she made to her husband. Tina tries to keep Eric close to her by trying to set him up with a friend of hers...not to mention concocting scenarios where it is appropriate and not suspicious to be seen with Eric. In the meantime, Tina's husband uncovers his wife's feelings for Eric though he can never confirm she is having an affair. Eric and Tina are able to stay one step ahead of her husband...but for how long?

Renae had told me to be careful and not get too close to Tina. It’s not that I ignored her advice, I just didn’t listen to it. Tina’s visit to my house last month was not her last. In fact, Tina’s visits are now a regular occurrence, her cover story being that she’s out walking Zeus who is always with her when she stops by. We spend hours together almost every day. It is rare that Tina isn’t at The Club when I’m working or working out. Our conversations have been longer and deeper, our closeness tighter. We talk aboutlife issues, likes and dislikes, life experiences…sometimes our chats are silly, sometimes serious.

Tina has shared many times how off track she and her husband are right now. The light in her eyes always gets dimmer when she talks about him. Tina has said many times she feels lonely in her marriage, as though Doug isn’t attracted to her anymore or that he finds her annoying. She takes his disinterest personally and as a personal failing on her part. Whatever Doug doesn’t like about her anymore must be her fault. I just listen to her, not knowing what to say. I’m sure as hell not a marriage counselor and I’m not qualified to give out any advice on the subject. It just frustrates me to no end that so many great women are married to jerks and I can’t find a woman to date me, let alone marry me.

Regardless, there is a chemistry and an attraction between Tina and me that is never spoken of but it is undeniable. A bond has developed. Our relationship is one of friendship but has the potential to move beyond it but for one thing - she’s married. Not happily so but married. A line is we don’t talk about but we both see it. I don’t know where this friendship/relationship with Tina is going but I want to find out.

These are my thoughts as I lay here in bed on a Friday night. Most night people don’t go to bed alone at 8:30 on a Friday. However, this isn’t a normal Friday night bedtime for this night person. Tomorrow is graduation as I will receive my bachelor’s degree in Business Management from Concordia University in St. Paul. Tomorrow is going to be a big day and I want to make sure I’m well rested.

This is the first time I’ve let my excitement about graduation show in any form. People tell me I should show my excitement more. I’ve always believed you don’t celebrate a victory till you cross the finish line. Tomorrow I cross the finish line. Then I’ll be excited. Then I’ll celebrate. The journey I’ve finished was not without sacrifices. I had quit my full-time job at KBOS so I could attend my night class. Worked two part-time jobs so I could pay the bills, which wasn’t always easy. There were months I didn’t know if I’d have enough money to cover all my bills but I always had just enough.

I turn over and look at my clock radio: 8:45. I should be trying harder to get to sleep but it’s difficult when so many images of the past year and a half are playing in my mind. A deep breath enters and leaves my lungs as I try to push aside all thoughts and drift off to sleep. The doorbell cuts through the silence, telling me sleep isn’t happening yet.

What the hell?Who would ring my doorbell when all the lights are off?

I throw back the covers, roll out of bed dressed in a t-shirt and pair of athletic shorts, and walk to the front door. Before opening the door, I turn on the outside light and see Tina standing there alone, without Zeus. I open the door and say hello. The look on my face conveys my confusion. Undaunted, Tina asks me, “Would you like to go for a walk?”

“Not tonight,” I decline. “I have to get up early tomorrow to go to St. Paul to attend my college graduation, so I’ll have to pass. But thanks for asking.”

“Okay. Another time then,” Tina says and then departs.

Upon returning to bed I reflect on what had just happened. I sensed a weird vibe coming from Tina. I’ve never seen Tina walking without Zeus and her headset radio. It seemed like Tina had something on her mind and wanted to talk to me. Urgently. Tina’s body language was almost desperate. I have a feeling what she wanted to talk to me about, or at least I had two main possibilities. One of those possibilities is not good. I figured I’d find out soon enough what is on Tina’s mind. That is another thought for another time. Right now it’s time to sleep. Want to be fresh for graduation.

Sunshine Diary of an Affair is available from amazon