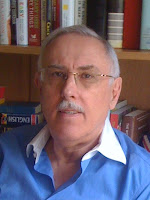 
I am a British thriller writer and former foreign correspondent in the Middle East. I am in the process of uploading my backlist (which was self-published way back when it wasn’t fashionable) to Kindle. The Winds of Kedem was an international bestseller, and the film rights were sold for Schreiber’s Secret. Cry of the Needle and High Heels & 18 Wheels will be available shortly.  My blog and website (a work in progress) is at http://www.radford46.wordpress.com

I usually think of the end and work towards it. I have never suffered from writer’s block.

When writing thrillers, one must draw a line between too much characterisation at the expense of pace, and vice versa.

Tel Aviv, Israel, my second home and the world’s most vibrant city.

Yes, apart from my latest medical thriller, which is UK based.

The Winds of Kedem: a story about an Israeli spy’s bid to thwart an Arab nuclear  plot to destroy Israel;

Schreiber’s Secret: A thriller about a Nazi sadist who lives a double life in order to conceal his identity, the Jew who vows to bring him to justice, and two reporters chasing a double murder trail that leads to the Old Bailey and the 'trial of the century'.

Never to believe what most mainstream publishers tell you. The industry drowns in platitudes.

No. I became the most successful Indie publisher in the UK twenty years ago. I’m now trying to do it again on Kindle at the age of 66.

My English teacher at school, and Stefan Zweig, IMHO the finest author of the 20th century.

Draw from your experiences, and don’t be afraid.

Beware of Pity and everything else written by Stefan Zweig.

SCHREIBER’S SECRET: Most Nazi sadists went to the grave with their secrets. Who was Hans Schreiber - and what was his terrible secret?

Crime reporter Mark Edwards and his colleague Danielle Green wade deep in red herrings and a twisting and turning plot as they seek to discover the terrible secret of a Nazi sadist who has continued his murdering ways in modern London. The story switches from a wartime transit camp in Czechoslovakia to contemporary Germany; from a London suburb to the Old Bailey, the world's most famous criminal court, where two men strive to claim that the other is the real Hans Schreiber.

Schreiber's Secret is a gripping tale of unimaginable horror and hatred revolving around a question of identity. Who is the real Hans Schreiber?

THE WINDS OF KEDEM: Revenge and retribution in the Middle East. Only one man can save Israel from a nuclear holocaust...

Mossad agent David Katri is torn between duty to country and to conscience as he battles to prevent an Arab terrorist plot to destroy the House of Israel. His implacable foe, Rashid Sedawi, is determined to bring about the end of the Jewish state. The action switches between Mossad headquarters in Tel Aviv and the Syrian Desert, between the teeming Shi'ite suburbs of Beirut and Pakistan's secret nuclear base near Islamabad. The streets of Stockholm and snow-bound Vienna also become soaked in blood as Katri finds himself tangled in a web of deceit spun by Arabs, Christians and Jews. A web where even love has a price.

The Winds of Kedem is a heart-stopping tale of vengeance, courage, love and betrayal ...

To come shortly: Cry of the Needle, a medical malpractice thriller.