Book Spotlight: The Sexy and The Undead by Charity Parkerson 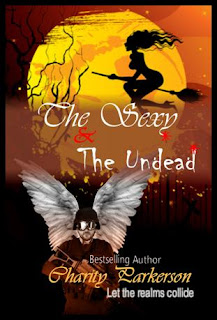 A potion gone wrong, or right?

Single, unemployed, and in charge of her very own pet zombie, Ella Perry is cooking up trouble, and it's raining men.

Ella has spent years searching for a cure for a zombie named Freddie. However, when an experimental concoction takes an unexpected turn, she gets a glimpse of the life she's been missing by hanging out with the undead.

Zombies, Angels, and Pixies. Oh my! Don't miss out on the first book in the new "Sexy Witches" series by Bestselling Author Charity Parkerson.

She didn’t get to visit with her friend, Lena, very often since she lived amongst the humans, and Tam was stuck living in the Hall of the Gods. She was taking full advantage of the rare social call by laying all her problems on the Seer as thick as possible. “I mean, look around,” she added, gearing up for a full rant.

“There’s not one man in this joint I’d be willing to sleep with.”

Lena’s bright pink hair, which stood out in a spike above her head, tilted from side to side as she did as Tam ordered. Her eyes widened, showing her confusion.

Disbelief laced her words. Lifting one beautifully manicured finger, she pointed out a blond angel that was guarding a nearby door. “What about that one?” Before Tam could answer, Lena added, “or that one?”
Tam didn’t bother glancing in the redhead’s direction. She knew without looking that both men wore matching black kilts and nothing else. Their golden muscular bodies were a common sight in the Heavens.
“Bloody freaking hell, Lena. All these guys are three feet taller than me. What am I supposed to do with them, I ask you? Their,” she made a swirling gesture with her index finger, searching for the right term. “Pricks. Yes,” she said with a nod, deciding that she liked that word. “They are probably the size of my leg. I’d be killed.”

A snort of laughter escaped Lena, but she covered her mouth as if attempting to hold it in. Tam’s nerve endings lit up at the sound. Most people believe that chanting their belief in fairies will cause one to grow strong, but in truth laughter was the key to pixie power. A day with Lena was equivalent to a day at the spa for Tam. Not only was Lena the clumsiest immortal in all the realms, she was also a regular hoot.

Feeling encouraged, she grew even more outrageous. “Take that one, for example.” Tam nodded toward a dark-haired angel that stood a few inches taller than the rest. “Notice that his kilt falls to his shins instead of his knees,” she pointed out.

Lena nodded. “I did think that was odd, but then again, what isn’t here?”

It was Tam’s turn to snort. “Well, his is not a fashion statement. I heard that he tried wearing the standard uniform when he first arrived, but everyone got sick of seeing that huge one-eyed monster slapping his kneecaps every step that he took. Mistress Katrina finally made him wear a longer one.”

Lena openly gawked at the man in question. Leaning over in her chair, she tried to peek under his pleat before losing her balance and almost landing on her face.

Catching her stare, the man began to inch the plaid upward as if fully prepared to relieve Lena’s curiosity.
“Thomas!” Tam cried, admonishing the wicked angel.

With a wink in Lena’s direction, he turned away, but Lena didn’t look the least bit ashamed as she attempted to right herself.

“Too bad,” she sighed. “I’ve never seen a knee-slapping monster before. Why don’t you just leave?”

Wasn’t that the million-dollar question? Tam’s wings drooped, mimicking her inner deflation. “I want a normal man,” she confessed to Lena. “An ordinary man who won’t squash my twat,” she added miserably.

Charity Parkerson was born in Tennessee, where she still lives with her husband and two sons. She is the author of several books including fifteen Amazon bestsellers.

She was named as one of the top three Indie authors of 2012- EbookBuilders She is a member of The Paranormal Romance Guild, is a Goodreads moderator, a member of Coffee Time Romance, and co-host of The Melissa Craig and Charity Parkerson show.

She won author of the week in August of 2011, and is a five-time winner of The Mistress of the Darkpath.