“My God, they can't expect to put ‘Ye Olde’ in front of anything they want and get away with it.”

If, like me, you’re a fan of The Big Bang Theory, you’ll immediately recognize Sheldon Cooper’s complaint about the historical inaccuracies of a Renaissance Faire, California-style.

As much as I’d like to distance myself from most of Sheldon’s opinions, I’m forced to agree with him on this point. As a writer, I’ve penned five books that are either historical (Gilded Age Chicago Mysteries) or have a strong historical element (Arkana Archaeology Thrillers). As a critic for Deadly Pleasures, I’ve reviewed my share of historical fiction (some good, some not) so believe me when I say that you can’t just put “Ye Olde” in front of anything and expect to get away with it. Authors of contemporary fiction have to juggle plot, pacing, and character development. Historical fiction writers wish it was that easy.

The first thing to consider as a historical fiction writer isn’t simply when something happened but what the world surrounding that event was like. We all know that Columbus sailed the ocean blue in 1492 but it’s a good bet that when he first landed in the Bahamas, he didn’t head for the closest Tiki bar to order a boat drink. Objects and places we take for granted in the 21st century may or may not have existed in the corner of the past an author is exploring. To make that fictional world believable, the times as well as the timing need to be understood.

Clothes Make The Man (Or Woman)

Period costume is something that most historical authors (good and bad) get right. The only difference is that bad writers fail to think about the impact costume can have on conduct. For example, everybody knows Victorian women wore corsets. What most people don’t realize is that a woman who is laced tightly enough to give her an eighteen inch waist can’t bend, stretch, or engage in anything more strenuous than lifting a tea cup. Most of her conscious attention is focused on the struggle to breathe. She’s probably a very uptight, cranky creature for no better reason than that her underwear feels terrible. People who wear whalebone corsets or chain mail armor are going to think and feel very differently from people who wear sweat pants all day long.

The Past Is Another Country

It’s often been said that human nature doesn’t change over time. Perhaps not, but cultural values can shift radically in a heartbeat. The contemporary fiction writer has the luxury of writing about people who are immersed in the same cultural soup as she /he is. Not so a historical fiction author. Cultural values are absorbed much like the air we all breathe--invisibly and with very little conscious effort (unless, of course, you’re wearing a corset). The greatest mistake a historical fiction author can make is to believe that people in ancient times thought and felt exactly as we do today.

To write effective historical fiction you have to immerse yourself without condescension in the values of the past no matter how odd they might seem to a modern sensibility. So if you’re planning to write a historical novel any time soon, be prepared to walk around in your character’s high-button shoes. And if the shoe pinches, write it. 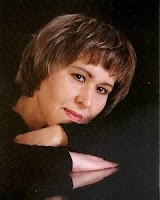 Nancy Wikarski is a fugitive from academia. After earning her Ph.D. from the University of Chicago, she became a computer consultant and then turned to mystery and historical fiction writing. She is a member of Mystery Writers of America, the Society Of Midland Authors, and has served as vice president of Sisters In Crime - Twin Cities and on the programming board of the Chicago chapter. Her short stories have appeared in Futures Magazine and DIME Anthology, while her book reviews have been featured in Murder: Past Tense and Deadly

She has written the Gilded Age Chicago History Mysteries series set in 1890s Chicago. Titles include The Fall Of White City (2002) and Shrouded In Thought (2005). The series has received People's Choice Award nominations for Best First Novel and Best Historical as well as a Lovey Award for Best Traditional Amateur Sleuth.

She is currently writing the seven book Arkana Archaeology Thriller Mystery series. Titles include The Granite Key (2011), The Mountain Mother Cipher (2011), and The Dragon’s WingEnigma (2012). The fourth volume in the series, The Riddle Of The Diamond Dove, is scheduled for publication in December of 2013. Ms. Wikarski’s work on the Arkana books has prompted Kindle Nation to call her one of its favorite authors. 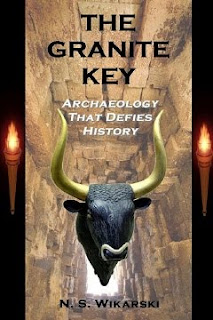 "Think 'MEDIUM meets THE LOST SYMBOL' and it only begins to describe the pleasures of THE GRANITE KEY - 5 Stars." (Kindle Nation)

In a nightmare, nineteen year old Cassie Forsythe sees her sister attacked by a man in a cowboy hat who demands something called "the key." Her nightmare mutates into reality before the night is over. Cassie is called to identify her sister's body--murdered exactly as her dream foretold. Cassie dismisses her vision as a fluke and fights to get on with her life. Disconnected and aimless now that her only family is gone, she drifts until the evening when she catches the man in the cowboy hat ransacking her sister's apartment. He bolts with an odd-looking stone cylinder--the granite key. From that moment, Cassie's normal world evaporates.

She learns that her sister led a double life--retrieving artifacts for a secret organization called the Arkana. The Arkana's leader, an elder named Faye, explains that her group performs a controversial kind of archaeology. They scour the globe for evidence of ancient pre-patriarchal civilizations in hopes of salvaging the lost history of the world. Their network of troves safeguards artifacts from highly sophisticated goddess-worshipping cultures on every continent. Cassie's sister had the psychic ability to touch an artifact and relive its past. Cassie has now inherited this gift. Faye wants the girl to take over her sister's role in the organization. Cassie doubts her powers but agrees. Now an insider, she is transported to the Arkana's mysterious underground vault in the countryside outside Chicago where the group tackles the mystery of her sister's murder.

The Arkana learns that the man in the cowboy hat is a hired mercenary named Leroy Hunt and that he is working for a fundamentalist religious cult known as the Blessed Nephilim. He takes his orders directly from the cult's domineering prophet--Abraham Metcalf. The granite key which Leroy stole is inscribed with hieroglyphics revealing the location of a mythological artifact reputed to have mystical powers--the Sage Stone. Although skeptical of its legendary capabilities, the Arkana is still afraid to allow the relic to fall into the cult's hands. Abraham's fanatical belief in the power of the Sage Stone could be the catalyst to start a war of religious genocide.

Before she died, Cassie's sister took photos of the strange markings on the granite key. The Arkana decodes the hieroglyphics which point to the ancient ruins of Minoan Crete as the hiding place of the Sage Stone. Faye hastily assembles a retrieval team including Cassie, her newly-appointed bodyguard Erik, and a British researcher named Griffin. The band of treasure hunters is mismatched and wildly dysfunctional from the start. Griffin has never gone on a field mission, Erik treats his inexperienced colleagues with contempt, and Cassie second-guesses her psychic hunches. She battles to prove herself to Erik at every turn. Their internal clashes rival the bigger crisis of what to do when they come face to face with their enemies.

A Matter Of Life Or Death

Even as they rake through megalithic tombs and Minoan palaces for clues, Abraham dispatches his son Daniel and hired gun Leroy Hunt to recover the Sage Stone. The Nephilim operatives won't hesitate to kill anyone standing in their way. Will Cassie and her teammates avert global disaster or find themselves casualties of Abraham's mania to exterminate the world of unbelievers? The Granite Key holds the answer.