Alton Taylor is a lead art director and a freelance illustrator/cartoonist from Queens, New York. He does a lot for artwork for independent publisher Flowered Concrete. The Serpent Samurai is his first graphic novel.

The way how I approached writting this piece was thatIwrote a short basic synopsis of how the whole story was going to be about. and then fill-in the details of the scenes and plots in with which characters were going to do what in the specific scene of the book. When I begin the writing process like THAT, then that's when the flow kicks in.

I would say yes in a sense that even though it is a short story the main character, Kurai, he's a character thats dealing with a lot of pain but you can't see it because he's consumed with a dark curse that's slowly turning him into a dark figure and theres a purpose to why he's dealing with the curse for the sake of saving someone. Hopefully that answered this question.

Anything that just taste good.Idont limit myself to anything in food.

I'm deffinitely a nite owl but you really have to look at insomnia, when you are alive in the mid-nights you literally are living in between the morning and night all at once. The clock just makes it different because of a.m. and p.m.

Japan. it's just a beautiful country and yet so strong and full with humble because of it's ancient roots.

Well for this being my first, it is set in a distant ancient land with fantasy elements as well. But for my other planned books I will take folks to realms of imaginative force. And also real world, urban architecture too.

Sometimes but it gives me a slow process when writing so I just keep a silent enviorment around me. 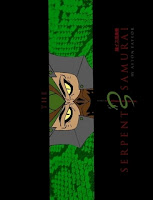 Again, the Serpent Samurai is set in ancient feudal Japan in where a brave samurai warrior named Kurai is a proud yet very pride-ish warrior and because of a failed attack at an an enemy, he loses his honor and gets it back but with a price and loses a loved one in the process. And so what are the actions he's willing to take to bring that person back into his life? It's a short 33 page story presented as a children's book but for mature readers of ages 16 and up. There is a vocabulary section and insight into the i-ching as well. Ican surely say people will admire the artwork.

Still learning haha but me and my partner are about to embark on allot of footwork to get our names out there and its going to be a difficulty yet embracing journey in terms of promotion and grabbing an audience that's willing to go for a ride with us in our works.

I can't say what exactly for the moment since the book has been released back in late april. So now I'm waiting to see what people have to say. but my close friends who have read it in preview sections that I posted on facebook, they are really impressed with what I came up with and so now I hope the people have that same positive crtique.

Perserverence and a strong drive will get you somewhere. Keep going.

Powers of the Damned.