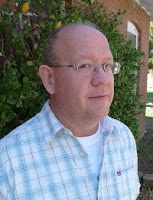 
In more than three decades as a professional writer/journalist, Christopher has covered myriad subjects and interviewed thousands of people from the famous to the unknown. He brings his years of experience to each one of his novels.

Every work is different. Through reading his novels, you can visit the American home front in the 1940s, a future San Francisco wiped out by a killer earthquake, a romantic love affair in post-war Paris in the 1920s, a future planet where the major industry is making babies -- or an exciting detective story set in 1930s Los Angeles.

In his career, his work has appeared in daily newspapers, monthly magazines, extensively on radio and the occasional dalliance with television. He has written advertising copy and radio commercials -- and continues to write, write, write.

Works featuring his byline include "Murder at Eastern Columbia" -- a James Murray Mystery that takes place in 1931 Los Angeles, "The Babi Makers" -- a science fiction tale about a world where the most important resource is babies; "Sarah & Gerald" -- a novel about Paris in the 1920s; "Forever - and other stories" -- a collection of short stories; "The Life Line" -- the novel of the big one that levels San Francisco; "News on the Home Front" -- a novel of two friends during World War Two; and "Mama Cat" -- a book for children. Also, several short plays, a few radio plays and a boat load of radio documentaries.

On average, I would say about 80% of the plot is planned out. I know generally where I need to go with each chapter but allow for detours along the way. In the case of "Murder at Eastern Columbia," a James Murray mystery, the story was 100% planned out. It's a complex web of interlocking puzzle pieces that had to come together in the end. It was a real challenge to write a book with so many threads that needed to be woven together. Keep in mind that it's two parallel stories occurring at the same time. This made it twice as complicated to plan out.

Definitely. Every novel I write has at least one character that thinks s/he's really in charge.

I love salads. I always say I'd be happy marooned on a desert island as long as there was a freshly stocked salad bar.

I'm more of a mid-day cheetah kinda person. I'm usually up around 6:00 a.m. but I'm not really good at writing that early. I go outside, water the plants and play with the dog.

Tokyo, Japan. I've always been fascinated by Japan. I see as many made-in-Japan movies as I can. I'm even taking Japanese lessons in case I get to go, one day.

Normally, no. I write a lot about places and time periods in which I have intimate and direct knowledge.

No. Any outside sounds are distractions to me.

"Murder at Eastern Columbia," a James Murray mystery, is about a young man who wants to be a writer. However, his options are limited as it's the middle of the Great Depression. One day, after work, he finds out his best friend's been murdered. He's desperate to use his skills to find the murderer. His efforts take him -- and his alter ego -- on a journey through downtown Los Angeles, looking for clews and trying to solve the murder.

I've been part of the writing game for many years. I started out writing for my high-school newspaper, then moved on to writing for daily newspapers, monthly magazines and a lot of radio work. So, there was not a whole lot I didn't already know. That said, I think the most important thing I've learned about indie publishing is the value of a great cover artist. It'sworth the money you pay to work with a competent professional and listen to his/her suggestions. They know more about design than I ever could. I'm lucky to have a top-notch, award-winning cover designer. I wouldn't change for the world.

I don't believe in regrets; that said, I wish I would have started self-publishing a few years earlier. I kept waiting for agents and publishers to understand what I was trying to do with my writing. I should have just skipped that phase and gone right to the audience. THEY get me. I've been really lucky to have great sales and wonderful reviews from readers who enjoy my work.

I've been writing since I was a child -- kid's stuff, animal stories and the like. So, it's really hard to pin-point an influence. However, I will say that I'm so glad I found Ayn Rand's novels ("Atlas Shrugged" and "The Fountainhead," among others) because she is a top-notch writer. She's simply brilliant at drawing characters and scenes. I've learned a lot about writing from reading her.

Yes: write for yourself and your audience will find you. The odds of you making a million bucks from your writing, or achieving fame and fortune, are slim. You're going to spend a lot of time with your books and your characters, so write what you enjoy, create characters that are interesting for you. DO NOT try to wedge your writing into whatever genre happens to be popular right now because trends fade. Good writing lasts forever.

I'd have to stay with Ayn Rand as favorite author and her novel "Atlas Shrugged" as favorite book.

Los Angeles. 1931. Your name is James Murray. You are a clerk in the Junior Boy's department at the swankest new department store in downtown. You want to be a writer, but there's a Depression on. Suddenly, you find yourself trying to solve the murder of your best friend. Will you be able to find the murderer before it's too late?

"Murder at Eastern Columbia" is two novels in one: two parallel stories, featuring two heroes, working two murders in two different versions of 1930s Los Angeles. Join James and his alter ego as they each try to solve the murder of the girl with sorrel-colored hair. Follow the twists and turns until the climactic scene atop the tallest building in all of LA: the brand new Los Angeles City Hall.