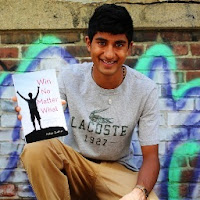 
Nihar Suthar is the founder of Hype Up Your Day. His company is the source of motivation and joy to over 100,000 people. Suthar was born and raised in Lewistown, Pennsylvania. Currently, he is a college student who inspires individuals, families, and corporations around the world to dream big and do even bigger.

For my most recent book, I actually planned out the layout and how I would tie each inspirational story together to make the book flow. Usually though, if I am writing a novel or something different, I just let my writing flow and go back to make edits later.

I sometimes do have that problem where I include too much of one character in the story. Therefore, I always have to remember to get everyone involved :)

My favorite food is vegetable lasagna! It's pretty healthy as well. Make it for me and I'll love you.

I'm the type of person to stay up decently late at night, but I also wake up pretty early because I feel more productive when I get started with my day early in the morning.

I would LOVE to travel to Rome and Italy, because I always hear about how beautiful they both are. Not only that, but they have famous landmarks...such as the Roman Coliseum.

In my first book, I included stories that took place all over the world! There were a couple from India and a couple others from the UK and United States as well.

I love listening to music while writing! I listen to more instrumental tracks though, because often the words in normal music can be a bit distracting.

My book released internationally at the beginning of June. It is being sold on Amazon and Barnes and Noble for the first couple of months. If sales are good, then it may be put into stores later as well.

I learned that writing is an extremely fun, but also difficult process. I had to edit my book almost 5 times before release! Also, the publishing process takes much longer than I originally though (about 3 months for me). Overall though, the entire experience was incredible.

My family and Pramukh Swami Maharaj, because they both inspire me on an everyday basis.

Never give up! I had no idea even where to start before even deciding to put together a book manuscript.

Just start writing and figure out all the details later.

My favorite book was Friday Night Lights: A Town, A Team, and a Dream by H.G. Bissinger

There are many negative things around us that bring us down in everyday life. As independent human beings though, we have the ability to determine what surroundings will ultimately affect us. My book offers several strategies and inspirational methods on how to make the most out of every day - to win no matter what.

I also have decided to donate most of the profits from all book sales to the Acumen fund, a worldwide charity investing in solutions to combat poverty. We can all make a difference in the world today!