Book Review: Agamemnon Frost and the House of Death 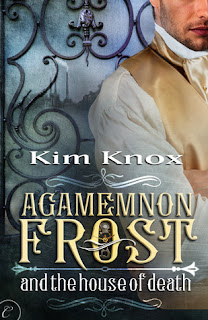 Decorated artilleryman Edgar Mason was forced to find new work when the British Empire replaced its foot soldiers with monstrous machines. Now he waits on the Liverpool elite as a personal servant. He has just one rule: he won’t work for fashion-addled dandies.

Agamemnon Frost, however, is far from the foppish man-about-town he appears to be. He’s working to protect the Earth from an alien invasion being planned by a face-changing creature known as Pandarus. And on the night he plans to confront the aliens, he enlists Mason to assist him.

For a man to love a man is a serious crime in Victorian England. But when Mason meets Frost, his heart thunders and his blood catches fire. And when Pandarus drags the two men into the torture cellars beneath his house of death to brainwash them, Mason’s new passion may be all that stands between him and insanity.

The trilogy continues with Agamemnon Frost and the Hollow Ships.

I must admit that I have never read any Steampunk before, but if the rest are anything like this book, I think I've been missing out.

Like a lot of army men, Edgar Mason has been forcibly retired from the army as more and more machines replace the men like him. Before joining the army he used to work as a manservant and he places himself on an agency register to get some gainful employment once more. He is requested for just one night to act as valet for Agamemnon Frost, who Mason thinks is nothing but fop and is glad the job is just for one night. Mason resolves to tell the agency as soon as possible that he doesn't want to work for someone like Frost again.

But Frost is no perfumed dandy at all, and enlists Mason's help in going up against the aliens planning an invasion  of Earth.

This book was wonderful! It was such a fun read, despite the subject matter. There were lost of little amusing things throughout as well as the exciting, adventure aspects. You could cut the sexual tension between Mason and Frost with a knife, but they don't actually do anything more than share some heated kisses in this first book, they kept getting interrupted, so they and the readers are left frustrated. We have to hope that the relationship will develop a bit more over the course of the next books.

The writing was fantastic, I was reminded of reading H.G. Wells and Jules Verne many years ago, wondering what sort of adventure the author was going to take us on next. Romance, adventure, intrigue, this book had it all and I'm glad I gave some Steampunk a go. Just one question, Ms. Knox - when's the next one coming out?