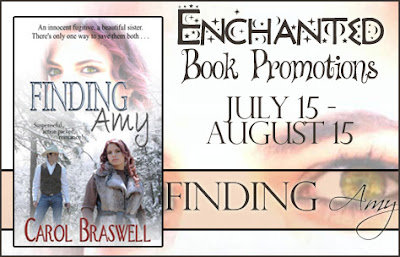 What begins in Montana as routine for Texas Ranger Carson Garrett, quickly turns into a 'run for your life' chase in order to protect the two women and child he is returning to Texas.

How far would you go to protect the ones you love?

When Texas Ranger, Carson Garrett is assigned to locate and place in protective custody the wife of a man suspected of illegal activities with a Columbian drug lord, it turns into more than routine. The estranged husband has put out a hit on his wife and the only person who knows where she is hiding is her twin sister, Amy Summers.

It is a race against time for Carson to find Amy, convenience her of the imminent danger and get her to lead him to Jamie so he can escort both women and Jamie’s four-year-old child back to Texas.

Even if they make it can love on the run survive?

Besides the obvious problems of running from a man who is trying to kill them, Carson and Amy have an instant attraction to each other and it is clouding his usual sharp judgment and causing them both to make costly mistakes.

A determined hitman, a diabolical plan. There is only one way to stop them both…

I love to write. I love to put characters in situations that seems impossible to get out of. Almost. Then, out of the blue, along comes that sexy, breathtakingly, handsome hero who can and will save the day. Sometimes, (I like this part), it’s the heroine who steps up and saves the day. I love to write. Did I mention that? Anyway, I love mystery, suspense and the forever kind of love. When someone asks me, “what do you write?” I can’t say romance. It’s not that simple. I want action, adventure, suspense with caring, loving, sexy, characters that seem to find trouble wherever they go.

I am married to my real life sexy hero who finds my imagination intriguing, but refuses to read my books. Thank God. Our, live-at-home children greet us at the door with tongues hanging and tails wagging. They travel with us when we vacation and get depressed when we have to leave them. We have four grown children who live close enough for us to see often.

Carson eased on the brakes and pulled over to the side of the road. A few seconds later, the SUV passed and Carson jotted the Texas license number down. He flipped his cell phone open and punched in his brothers’ number.

“What now?” Rex answered on the second ring.

“I need you to run a plate for me. I have a black SUV following me. It may be nothing but I don’t want to take any chances.”

Carson waited for Rex to connect to his headquarters. “Yeah. Go ahead. I have the office on the phone.”

Carson gave Rex the number and waited as he relayed the information. It only took a few seconds for Carson’s worse fears to become real.

“The vehicle is registered to Martin Keener. Sounds like the enemy is knocking on your door, bro. You need to lose him or kill him.”

“Why would I kill him? He hasn’t done anything yet.”

Cason snapped the phone closed. His brother had bad timing for his sense of humor or maybe Carson’s nerves were too tight. Whichever, he had to shake this tail. If Carson stayed behind him, there wouldn’t be any reason to lose him. Carson eased back onto the road, behind the SUV.

Excitement cursed through Max’s veins when he spotted the white Dodge Dually in the hotel parking lot. He hid behind a delivery van and waited until Carson came out of his room, threw his case in the back and drove out of town in the direction of Yellowstone Park. Keeping a safe distance so as not to attract attention, Max didn’t think Carson would notice one more vehicle among all the others traveling the same road. Several cars had picked this cloudy day to go site seeing or visit the lodge. Max planned to stick to him like glue until the women came back into the picture.

Martin said he would pay him to get rid of the women and bring the bag and kid back. He hadn’t said, but Max figured there had to be cash in the bag Martin kept harping about. He always mentioned the bag his wife stole and his daughter as an afterthought. Max had already decided the kid would die with her mother. Sure, it would be an accident as far as Martin was concerned. He couldn’t take the chance on a four-year-old fingering him for murder. Max switched the radio over to a country station and sang along to Brooks and Dunn’s Boot Scootin Boogie while keeping close tabs on the white dually about a half a mile ahead of him. He jammed to the country beat until the brake lights of the dually in front of him came on and pull off of the road.

“Damn.” Max gripped the stirring wheel and eased off the gas. When he came along side of Carson, he accelerated and sped past.