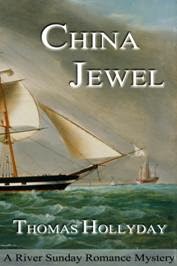 
Media around the world cover an inspiring and beautiful ocean race as international tall ships once again sail the ancient tea route to China. Yet, beneath the bright sails hide evil and treachery as the competitors sabotage and even murder each other to win the billion dollar prize.

The American entry is the Peregrine - a replica of a famous Nineteenth Century clipper with a mysterious past. Tough former soldier Jim Cutter is the ship's race director. It's his responsibility to ensure the ship makes it to its destination in one piece.

Then far at sea, the Peregrine disappears. Against impossible odds, Cutter must track down the ship and rescue its crew. Most importantly, he must still conquer his recurring personal demon. His only son is aboard. Cutter failed him once before - and he will go through Hell and High Water to bring him safely home again.”

An excerpt from China Jewel:

Out in the harbor more sails were let go from yardarms and dropped to fill with wind. The crew adjusted the staysails and jibs to the early southeast breeze. The square cloth slapped and grew taut with the braces and sheet lines. As they provided thrust, the Peregrine, towering over the spectator boats, sailed ahead. The outward tide added speed. The ship’s wake became a white curl sliced upward by the curved sharp bow. The water raced along the black planks of the hull and out from the sides of the deep canted rudder.

She moved towards the Chesapeake, past the town’s famous rock pile rising like a tiny island in the harbor. The monument, constructed to honor the freed local slaves after the Civil War, would normally have been the center of attraction for tourists, but not today. All eyes were on this classic replica ship as it passed on its port and starboard sides the sleek late Twentieth Century ocean yachts. They were owned by observers from American, British, and French competitor teams, as well as many smaller weekend cruisers and sloops. Overhead, helicopters from Baltimore, photographing live video for the national and overseas news, droned like big searching bees looking over the strange white and black flower below.

In front of her a gray United States Navy guided missile frigate was moored. Her ensign flew at the center masthead; a Sikorsky Seahawk helicopter warmed up on her deck. The Assateague, a 110-footer from the Coast Guard, also stood by. To her starboard, on shore, hundreds of white, tan, and black families were standing in the backyards of their houses, silent as the ship heeled and gathered speed. Next to them, craftsmen were clustered on the wooden and steel railway of the shipyard or the tarpaper-covered roof of the long white woodworking shed. Seamstresses who created the antique Peregrine cotton sails stood on the town pier, their faces glowing. Here also the local high school band belted out the state song “Maryland My Maryland.” With them a white-haired choir from the Flying Tigers World War Two veterans club sang in harmony. All in all, the birth of this ship was treated as a resurrection by the townspeople; a rebirth of their heritage.

Morning shadows from the taller brick buildings spread over Cutter and the other spectators. When the band stopped, they heard the commands of the mates and the continuing cracks of sails filling with wind. The sailors climbed aloft, letting go more cloth and shifting the great controlling lines that adjusted the yardarms.

Cutter nodded. “The town newspaper editor said it’s the best Goddamned thing that has ever happened to this town.”

Jolly leaned over and whispered, “The navigation people estimate her to log two hundred twenty nautical miles a day.” The little man looked around suspiciously at the other revelers, many of them competitors, here to learn Peregrine race secrets.

Thomas Hollyday brings to life modern Chesapeake characters in his fictional shipbuilding town of River Sunday, a place located at a crossroads of today’s world. Reviewers praise his rich sense of place, animals and nature coupled with a vibrant imagination. His words resonate with a deep awareness of history and legend, reminiscent of Michener and Follett.  From pre-history to the present, marauders have disturbed this land and its people when tribes, pirates, soldiers, criminals and, some say, even ghosts have come to do evil. These are the stories he relates. His novels have been compared to “pocket battleships,” with interwoven story lines, intriguing mysteries, beautiful love affairs and unique characters in carefully scripted pages. There is humor too as Tom draws on a comedic sense honed from an accomplished cartoonist background. Critics praise his ability to take the reader into thrilling suspense and to make him or her “see the blood” and “breathe the swamp air.” His books are enjoyable sojourns into a fascinating world and are definitely must reads on today’s bookshelf.

The River Sunday Romance Mystery series of books are available through Amazon and other retailers as well as Ingram and Baker&Taylor distributors in both print and eBook:

Part of the proceeds from the sale of Thomas Hollyday fiction, cartoons and non-fiction goes to support clean drinking water resources for wildlife.

An ebook copy of China Jewel for one lucky commenter :)

Just reply in the comments below to be entered in the draw.